Protesters throughout Jordan have demanded the closure of the Israeli Embassy and an end to Arab-Israeli normalization in response to the ongoing conflict in Israel and the Palestinian territories. 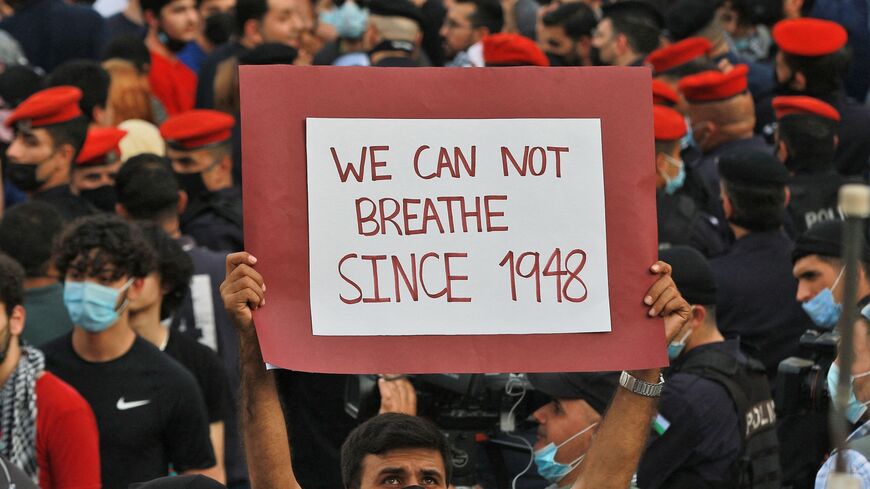 A man holds up a sign reading "we can not breathe since 1948" (the year of the creation of the state of Israel) during a protest to express solidarity with the Palestinian people near the Israeli Embassy in Jordan's capital, Amman, on May 9, 2021. - KHALIL MAZRAAWI/AFP via Getty Images

There have been protests across Jordan in support of Palestinians in the ongoing conflict with Israel, according to local media.

Demonstrations against the “Zionist enemy” took place in Kerak in central Jordan, the southern city of Maan, and other cities in the south, the Jordanian news website Khaberni reported Thursday. The protesters demanded an end to normalization agreements between Arab states and Israel and burned Israeli flags.

Jfranews also reported a protest Wednesday where people demanded the Jordanian government expel the Israeli ambassador from the country.

The Arabic-language hashtag “let’s go to the border” trended on Twitter on Wednesday and Thursday, with some Jordanians posting the apparent call to mobilize at the Israeli border.

The protests are in response to the continuing conflict in Israel and the Palestinian territories.

Jordan was the second Arab state to establish diplomatic relations with Israel, doing so with a US-brokered peace treaty in 1994. The two states previously fought in several conflicts, and Israel took the West Bank from Jordan in 1967. The Jordanian royal family still has custodianship over Muslim holy sites in Jerusalem.

Israel-Jordan relations were already worsening before the recent outbreak of fighting in Israel and the Palestinian territories. In March, Israel canceled a visit to Jerusalem by the Jordanian crown prince, saying he violated security protocols. Jordan has both criticized Israel and called for de-escalation in regard to the current violence.

A significant number of Jordanians are descendants of Palestinians who fled or were forced out of what is now Israel. The exodus, which Palestinians call “the catastrophe,” took place during the 1948 Israeli war for independence, also known as the Arab-Israeli war.

Hundreds of Jordanians protested outside the Israeli Consulate in Amman on Sunday, demanding its closure.