Israeli Prime Minister Benjamin Netanyahu prefers to have the IDF responsible for the decision to end the fighting against Hamas, instead of admitting he caved into pressure by US President Joe Biden. 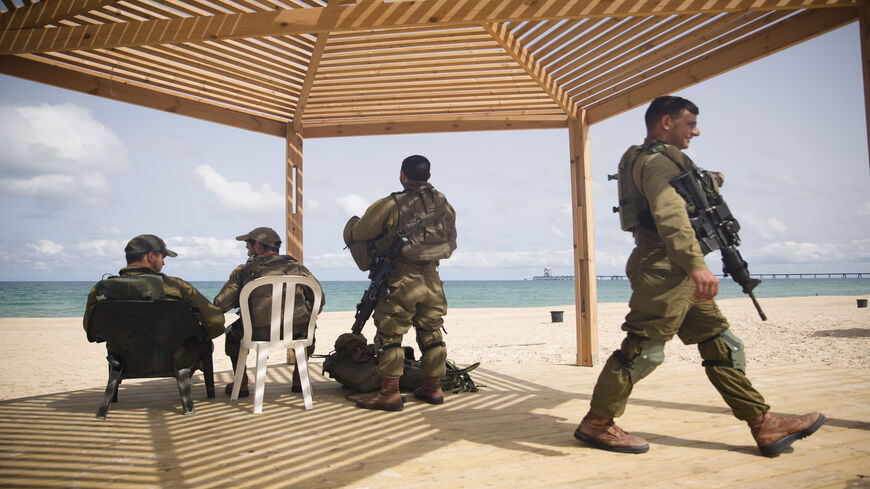 Israeli soldiers patrol Zikim beach near the border with the Gaza Strip after Israel and Hamas agreed on a cease-fire, Zikim, Israel, May 21, 2021. - Amir Levy/Getty Images

Israel’s security Cabinet voted last night in favor of a cease-fire in the Gaza Strip, potentially ending almost 11 days of hostilities with Hamas. The decision was taken after days of international pressure, with US President Joe Biden actively campaigning for a truce. When Prime Minister Benjamin Netanyahu realized that the limited credit line issued by the “bank of America” had run out, i.e., that Washington was losing its patience, he opted for a cease-fire. Still, deeply familiar with Israeli public opinion, Netanyahu sought cover behind the leaders of Israel’s defense agencies. The statement issued by his office late on May 20, explained that the security Cabinet had voted for a cease-fire with Hamas, “on the recommendations” of the security chiefs.

Operation Guardian of the Walls was put to sleep a mere 10 days after it began, for various reasons. In military terms, the campaign had run its course. Absent a ground offensive and an attempt for face-to-face engagement with Hamas, there was no longer any point to the mutual pounding Hamas and Israel had delivered since May 10. This, in addition to Biden’s limited patience, led to a stalemate.

Apparently, contrary to various Israeli media reports, Biden did not issue Netanyahu with a stern ultimatum to end the offensive. Reportedly, in his fourth conversation with Netanyahu May 19, Biden said he would be pleased to see the violence in Gaza winding down. Netanyahu explained, at length, Israel’s goals and the unbearable situation in which Israel repeatedly finds itself vis-a-vis the Palestinian terrorists ruling the Gaza Strip and lobbing rockets at Israel. The president avoided unequivocal or harsh language, summing up the call by saying he expected calm to be restored by the end of the week. Netanyahu muttered something noncommittal in response, but Biden got his wish. On May 20, just prior to the start of the security Cabinet meeting, Netanyahu finally made a wise move. He called Biden, informed him that Israel would agree to a cease-fire and gave him credit for the move.

The day before, Netanyahu was still trying to maintain the tough guy image he had nurtured during the Barack Obama presidency. Responding to reports that Biden had demanded an end to the Israeli offensive on Gaza, Netanyahu tweeted, “I am determined to continue this operation until its goal is achieved.”

Interestingly, the message was issued in Hebrew only, contrary to Netanyahu’s practice of keeping the foreign media in the loop in previous military confrontations, probably in the vain hope that someone at the White House had uninstalled the Google Translate app. The statement was pure political bluster, a desperate bid by Netanyahu to brand himself as the only Israeli politician able to stand up heroically to an American President, just as he had allegedly done vis-a-vis Obama for eight years.

Less than 48 hours later, all that remained of his bluster was a whisper. Israel had agreed to ground its fighter jets and silence its artillery. This is what a senior diplomatic source in Jerusalem told Al-Monitor this morning on condition of anonymity. “All in all, the United States delivered the goods. Biden provided us with public backing at least three times during the operation, blocked the French involvement and allowed us to discharge our mission. True, the Americans were not wild about the violence and especially about its possible spread to other fronts, but as far as the international front goes, we cannot complain. Biden also withstood pressure from within his party, and did not blink. His announcement that he would authorize a speedy re-supply of Iron Dome rocket interceptors was very important in real time so that no one would delude themselves into thinking Israel was running out of defense ammunition.”

Asked whether the United States had presented Israel with an ultimatum at any point, the source answered, “Absolutely not. Biden was polite, expressing understanding for Israel’s situation, but made it clear that the time had come to lower the flames, or he used language such as 'the US would like to see significant Israeli steps toward a cease-fire.' True, this is far from what Trump would have done, but he left the White House in January. This is a new reality and over the past 10 days we found out that it is not so terrible.”

Foreign Minister Gabi Ashkenazi was in regular touch with US Secretary of State Antony Blinken throughout the operation. Blinken took a slightly tougher line with Israel than his boss. “Blinken belongs to the liberal wing of the Democratic Party. Traditionally, the position of the State Department is more balanced toward the Palestinians than that of the White House. But Blinken did not present us with any ultimatums at any point,” the top diplomatic source said.

By the way, Blinken has scheduled working visits to Israel and other countries in the region in the coming days in a bid to ensure the cease-fire holds and stability is restored.

After Biden’s fourth call, Netanyahu dragged out the military campaign one more day. He was still hoping to get a victory picture. As aforementioned, that same evening he reverted to his true form as an unabashed, relentless politician, hiding behind the backs of the Israel Defense Forces (IDF) and the Shin Bet. He wanted to avoid domestic accusations that he had folded in the face of external pressure.

The plaudits and effusive praise for the extraordinary performance of the IDF and of its Chief of Staff Aviv Kochavi made way quickly for resentment. Claims quickly surfaced, mostly on the part of Netanyahu’s meek and disciplined ministers, that the IDF had failed to deal Hamas a fatal blow, that the intelligence failed to provide sufficient bombing and assassination targets and that the military performance had been mediocre, at best.

Kochavi was hardly surprised. He knew that Netanyahu would let him bask in the limelight only for as long as his political interests dictated. Israel’s top soldier was thus forced to listen to Transportation Minister Miri Regev of the Likud, one of the noisiest of Netanyahu’s acolytes, lecture him during the Cabinet meeting about his support for ending the operation. She argued, “70% of the public wants to continue the operation.”

Israeli experts estimate that ultimately, Israel has achieved a fourth consecutive tie with Hamas in the past 12-plus years. These outcomes are inevitable as long as Israel’s political echelon stops short of ordering the defeat of Hamas, and as long as the IDF and Shin Bet fail to do what it takes to conquer the Gaza Strip and root out its terrorists as they did during the 2002 Operation Defensive Shield against Palestinian terrorists in the West Bank.

The IDF executed its mission in the Gaza Strip with precision based on quality intelligence, the blows it dealt Hamas were painful and particularly harsh, but the operation was essentially a replay of previous ones. In strategic terms, Israel sustained a significant blow. Hamas has not been vanquished, its top leadership remains alive, and the organization continued firing rockets at Israel until the very last minute. Most importantly, it positioned itself successfully as the ultimate defender of Al-Aqsa and the other Jerusalem sites holy to Islam, embarrassed Israel, disrupted the Jerusalem Day celebrations marking the city’s unification under Israeli rule, sent lawmakers fleeing for cover in the middle of a Knesset session, set fire to relations between Israel’s Arab and Jewish citizens and escalated Palestinian anti-Israel violence in the West Bank. Not a bad haul for 10 days of asymmetrical fighting.