Many security sources and social media activists fear the Muslim Brotherhood could exploit the Clubhouse app to promote its ideas and recruit new operatives in Egypt. 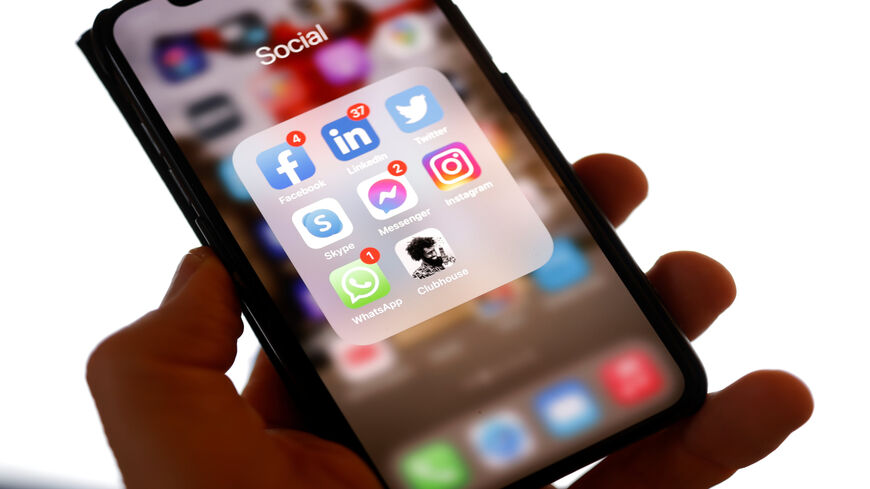 An illustration photo shows the application Clubhouse on a smartphone in Berlin, Jan. 25, 2021. - Odd Andersen/AFP via Getty Images

CAIRO — Many Egyptians rushed to download and register on the audio-based chatroom app Clubhouse with the release of its Android version in Egypt, May 24, by Alpha Exploration Co., the app's developers.

Alpha Exploration’s global launch of its app for Android follows its success in the United States, United Kingdom, Canada, Australia and New Zealand in early May, and in Brazil, Japan and Russia on May 18. Roll out to India started May 21.

In Egypt, Clubhouse quickly gained popularity, although it was only available to iPhone users and its operating system iOS at first.

According to Statista statistics portal, users of iOS in 2021 account for about 23% of the total 28 million Egyptian smartphone users.

On the reasons for Egyptians' interest in using Clubhouse, Mostafa al-Dahshan, an information technology expert and programmer at one of the major programming and smartphone applications design companies in Egypt, told Al-Monitor that the Egyptians' appetite for the application is part of the global demand for it as a result of what he called loss of confidence in other social media tools.

“Confidence declined as Facebook and other social media networks have been censoring concent and deleting some posts or banning the accounts of their owners. This mainly happened during the US elections and the US Capitol events. Algorithmic censorship was also practiced in relation to the recent Palestinian-Israeli conflict, pushing many Egyptians and Arabs in general to turn to Clubhouse, as they had felt that their posts are no more welcome on Facebook and other social media networks for showing sympathy with Palestinians," he said.

Dahshan added, "Therefore, I expect more demand for this app in the coming period in Egypt, especially with the launch of the Android version. Clubhouse is basically an audio service and its content is difficult to be tracked or censored."

Many social media activists in Arab and Islamic countries launched a campaign to boycott Facebook and reduce its rating on app stores to protest its deletion of many posts supporting the Palestinians during the Palestinian-Israeli conflict in Jerusalem and the Gaza Strip on May 5-21. Facebook’s rating dropped from four to one star on the Apple store, and from 4.6 to 2.7 stars on Google store.

Clubhouse made its debut in March 2020 as the first social media outlet consisting of closed chatrooms. Each room is linked to a specific topic or issue. Users use voice messages in chatting instead of the traditional posts and typing used on Facebook and Twitter, which are currently seeking to launch similar voice chat services.

In spite of the momentum the application gained in cyberspace and among Egyptians, several newspapers and media outlets opposing the Muslim Brotherhood, such as Al-Ain and Sky News Arabia, warned that the group could exploit the app to sway the Egyptian and Arab public opinion in its favor and recruit new operatives.

In a press statement to Sky News April 18, Tariq al-Khouli, a member of the Egyptian parliament's Foreign Relations Committee, said that Muslim Brotherhood members have used Clubhouse to promote a reconciliation project between them and the Egyptian authorities. He noted that such moves do not express the Brotherhood’s sincere desire for change, but rather their attempts to return to the political scene. For Khouli, this has become impossible amid the Muslim Brotherhood involvement in numerous terrorist crimes that targeted thousands of Egyptians and attacks that included 70 churches.

Muslim Brotherhood members are currently using the app, which is evidenced by their launching of a chatroom to discuss reconciliation with the Egyptian regime. Another chatroom also criticized Turkish presidential adviser Yasin Aktay’s statements about a rapprochement between Turkey and Egypt.

Al-Monitor tried to contact some Brotherhood members and supporters of Clubhouse, but no one responded. Al-Monitor also tried to contact one of the Brotherhood leaders currently living in London, Mohamed Sudan, but he didn't respond. Most of the group’s leaders are either imprisoned or live abroad, and rarely give out public statements.

The Egyptian government classified the Muslim Brotherhood as a terrorist group in December 2013, as many of its members, leaders and supporters were charged on counts of involvement in or incitement to terrorist crimes, especially after the ousting of Brotherhood-affiliated President Mohammed Morsi on July 3, 2013, by the Egyptian armed forces following popular protests — the largest in the history of Egypt. On June 30, 2013, Egyptians swarmed the streets demanding early elections. Morsi disregarded their demand.

As a result of the accusations leveled against the Muslim Brotherhood and its classification as a terrorist group, many of the group's members and leaders were arrested, while others fled to Turkey, Qatar, Sudan and Britain.

While Khouli underestimates the influence in the Egyptian political scene that Brotherhood members and supporters could gain on Clubhouse, Ahmed Atta, a political researcher at the Middle East Forum in London, believes otherwise.

“The Brotherhood and its supporters are clearly interested in the app to break the isolation imposed on it since the June 30 Revolution,” Atta told Al-Monitor. “This interest in Clubhouse is a means to resume dialogue with Egyptian society.”

He said, “Egypt, Kuwait and Jordan are among the most interacting states with Brotherhood members on Clubhouse. In their contributions to the app, these members seek to spread frustration and discontent among some of the residents of those countries in light of some ongoing public complaints and to provoke them against their governments. They use the voice messaging feature that gives users more space to share their views and easily engage in dialogue compared to written posts, which require a longer time to write and to be read. Of note, many social media users get bored reading long posts while it is not boring to listen to audio messages.”

Ahmed Mukhtar, an information security expert in an information technology company, agrees with Atta. He told Al-Monitor that terrorist organizations could use Clubhouse to communicate with their members in various countries. He explained, “Security forces can track all posts made by a Facebook account owner involved in terrorist crimes. In Clubhouse, however, terrorists can exchange conversations with others in different countries in closed chatrooms whose content cannot be tracked.”

Mukhtar said that the use of the human voice in communicating through social networking sites, as in Clubhouse, instead of a written post and limiting the entry to Clubhouse to those who have invitations from previous users, reduces the spread of fake accounts and their misleading effect on society.

“The Muslim Brotherhood exploited the posts of thousands of fake Facebook and Twitter accounts to spread many rumors against the Egyptian authorities,” he concluded.