For Bibi, it’s the gift that keeps on giving as the Arab coalition splinters; Turkish protesters want an invite to Clubhouse; Erdogan quiet on Khashoggi report; the battle over Mosul; our take on Iran’s ground game; and more! 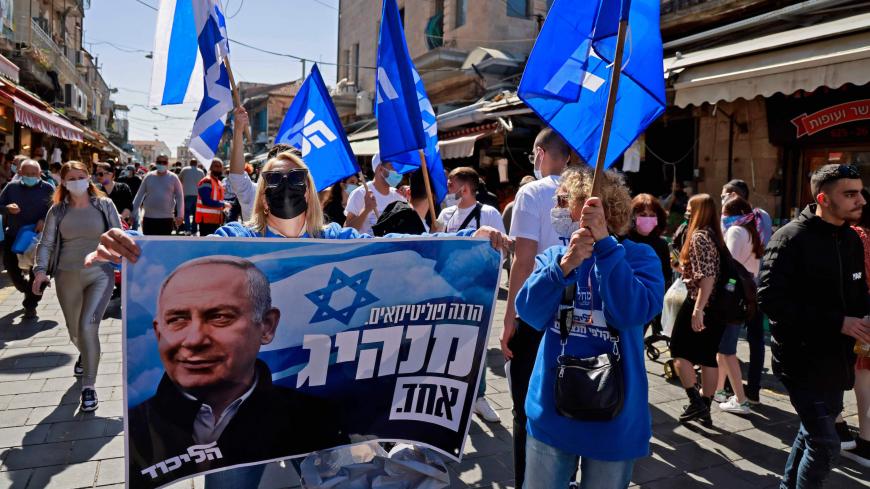 Supporters of Israeli Prime Minister Benjamin Netanyahu campaign at the Mahane Yehuda market in Jerusalem on Feb. 26, 2021 ahead of the March 23 Israel general election. - MENAHEM KAHANA/AFP via Getty Images

Israeli Prime Minister Benjamin Netanyahu is holding off, for now, on retaliation for the Feb. 26 attack on an Israeli cargo ship, which Israel has blamed on Iran (Tehran has denied responsibility). There were no casualties and limited damage, and the ship is back on its course after repairs in Dubai. Most of Bibi’s inner circle argues that restraint, and using the incident as yet another example of Iran’s malign behavior, will serve it best in its dealing with the Joe Biden administration. With the US-EU-Iran nuclear talks stalled (see below), the fear of imminent discord with Washington over Iran is less. Mossad Chief Yossi Cohen is reportedly the abstainer from the current restraint consensus, advocating a to-be-determined retaliation.

Iran: the gift that keeps on giving. "Iran has served Netanyahu well throughout his political career," reports Ben Caspit, who has the inside scoop on Israel’s deliberations on the next steps. "He has fanned the flames of the Iranian threat to great heights and repeatedly used them to his political advantage. Now, at almost the last minute before the elections (on March 23), he has once again been handed this gift that keeps on giving."

As Arab voters head to the polls for Israel’s fourth election in just two years, the fracturing of the Arab Joint List means they’ll have two Arab groups to choose from. The first is led by Knesset member Ayman Odeh and consists of three of the Arab-majority political parties: Hadash, Balad and Ta’al. But the new Ra’am party, led by Knesset member Mansour Abbas, promises a more centrist approach. “We are neither left nor right,” Abbas said in February. “We will work with everyone to advance the issues important to Arab society.”

Competition for Arab voters. The split comes as voters are caught in sheer desperation, with the coronavirus and economic crisis leaving many without jobs. That result is politicians seeking new voters. In past elections, Jewish parties avoided including Arab candidates on their lists, leaving the Joint List to address Arab concerns. This time, Jewish parties are competing with Arab parties for votes in the Arab sector. This courting of Arab voters “will cause Arab Knesset members to show greater interest in the needs of their electorate,” social activist Samir Abd Elhadi told Al-Monitor.

Read more from Abu Much about the fractured List here.

3. Clubhouse finds a market in Turkey

Audio-based social media app Clubhouse is growing in popularity in Turkey, with users flocking to the US-made chat network to escape government censorship. Student protesters turned to the app in January to organize the Bogazici demonstrations, reportedly giving chatrooms names like “whiskey” or “beer” to mask their free-speech discussions. Despite the buzz, privacy concerns remain after Turkish authorities took into custody a number of Clubhouse-using protesters.

“Are you on Clubhouse?” Pinar Tremblay explains that getting an invite to Clubhouse has become something of a status symbol for young people in Turkey, with some eager Android users confirming to Al-Monitor they had found a “back door” to download the iPhone-only application.

Ankara has yet to comment on the new US report detailing the murder of Washington Post columnist Jamal Khashoggi in Turkey. The intelligence assessment released by the Biden administration on Friday concluded that Saudi Arabia’s crown prince, Mohammed bin Salman (commonly referred to by his initials, MBS), had approved the operation at the Saudi Consulate in Istanbul that killed Khashoggi in October 2018. Turkey’s silence is especially deafening given its own investigations into the journalist’s murder and Erdogan’s well-known disdain for MBS.

Sigh of relief? As Amberin Zaman writes, “President Recep Tayyip Erdogan must be relieved that a fellow autocrat eluded punishment from Washington.” The Biden administration stopped short of imposing sanctions on MBS, but it did unveil the so-called Khashoggi Ban, which gives the State Department the authority to impose visa restrictions on individuals who, acting on behalf of a foreign government, target journalists and activists. Officials in Erdogan’s government would easily meet this criteria.

Biden’s cold shoulder. Relations between Ankara and Washington remain strained, in part over Turkey’s purchase of Russian-made S-400 missiles, its actions in the Eastern Mediterranean and its worsening human rights record. Notably, Biden has spoken with his Saudi counterpart, King Salman bin Abdul Aziz Al Saud, the father of MBS, but has yet to place a call to Erdogan, whose government exposed the Khashoggi murder.

5. Iran and Turkey rivalry heats up in Mosul

Mosul has emerged as an important arena in the competition between Ankara and Tehran for greater influence in the Middle East. Turkey’s focus on nearby Sinjar has fueled this rivalry, and a rift between the countries is now apparent. On the surface, Ankara has cited the Kurdistan Workers Party settling in northern Iraq’s Sinjar district as the reason for military intervention. Tehran argues its military attendance is required to prevent the revival of the Islamic State.

Why Mosul? For many in Turkey, Mosul remains a “lost homeland” that slipped through Turkey’s fingers as the Ottoman Empire collapsed. Sulaimaniyah, Erbil and Dahuk, the three regions that make up Iraqi Kurdistan, were part of the Ottoman Mosul province. Meanwhile, Iran has gained considerable influence in Mosul via its allies the Popular Mobilization Units. Local support lines increase the value of the Mosul-Sinjar route to the Iraqi-Syrian border.

Balance leaning in Iran’s favor. Turkey’s sectarian detour tipped the balance of power to Iran. But Sunni anger with Shiite militias in Mosul is steadily brewing as sectarian strife and corruption cripple the city’s recovery.

Read Fahem Tastekin’s report on the rivalry over Mosul here.

Our hot take: Iran’s ground game likely to pick up

With the prospect of US-EU-Iran talks on the Joint Comprehensive Plan of Action, or Iran nuclear deal, stalled for now, eyes turn to Iran’s ground game in the region. The absence of diplomacy in the Middle East is usually a worrying sign; Iran and its proxies are always engaged in Iraq, Syria, Lebanon and Gaza. The attack on the Israeli cargo ship seems a classic Iranian provocation and test — damaging enough to force Israel’s leaders to scramble but not necessarily meriting a military response. The exchange between Iran-backed militias and US forces in Iraq and Syria is another sign that Iran is hardly idle. Tehran no doubt is already weighing its next moves. Eyes are on Yemen, where the Biden administration has given top priority to ending the war. Mohsen Milani told us last month that Yemen may be the best opportunity for regional diplomacy. So far, Ansar Allah (the Houthis) are not letting up. Iran has its own elections in June, and hard-liners who control the parliament are likely to carry the day.

One Cool Thing: Inside Jerusalem's Tombs of the Kings

Taghreed Ali dives into the history of the Tombeau des Rois, the 2,000-year-old burial site owned and managed by the French Consulate in Jerusalem. The Tomb of the Kings, which was acquired by France in the 19th century, is believed to have been constructed for an aristocratic family during the Roman era.

“The ancient Romans believed that burying their dead inside the rocks would provide more stability for the deceased to return to another life, unlike burial under the soil,” a Jerusalem historian explained.

In Case You Missed It: Al-Monitor podcast on reimagining US strategy in the Middle East

RAND researchers Dalia Dassa Kaye, Linda Robinson and Jeffrey Martini suggest the United States needs to move away from "threatism" as the focus of its approach to the Middle East, arguing that having 80% of all assistance being military is "unbalanced."

Listen to the podcast here.

The UN Syria commission report says tens of thousands remain forcibly disappeared across Syria. The 30-plus page report out Monday says that after nearly a decade of conflict, Syria’s warring parties (but especially the government) are focusing on “concealing rather than investigating crimes” committed in detention.

The Popular Mobilization Forces (PMF) is not a coherent, integrated organization, says a paper by the Chatham House. The PMF is a series of fluid, adaptive networks connected to structures within the Iraqi state, argues Renad Mansour in his latest report. These networks developed into significant security, political and economic forces following the territorial defeat of the Islamic State.