Lebanese parties are distributing aid and food baskets to people suffering under difficult economic and social conditions but at the same time are ignoring the root of the crisis. 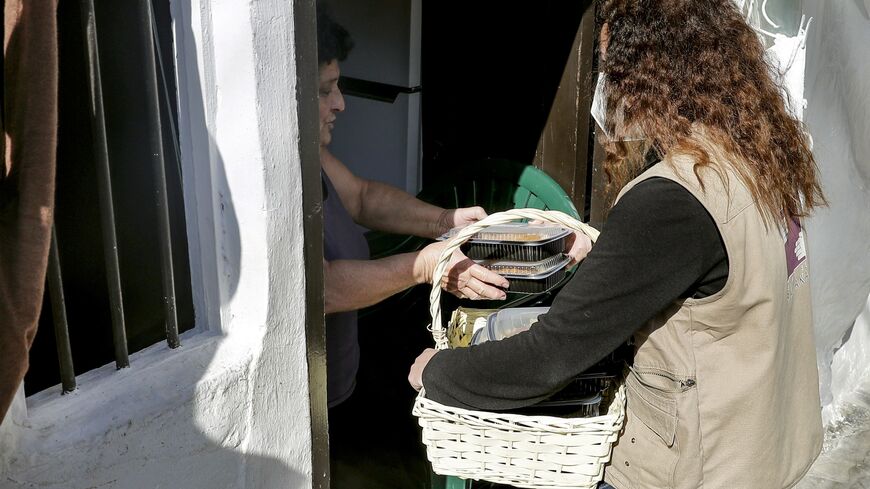 A volunteer from the Lebanese nongovernmental organization Beit al-Braka (House of Blessings) distributes meals to an inhabitant of one of the capital Beirut's poor neighborhoods, on Feb. 23, 2021. Lebanon is locked in its worst economic crisis since the 1975-1990 civil war, with no end in sight. - JOSEPH EID/AFP via Getty Images

BEIRUT — Several political parties in Lebanon, such as Hezbollah, the Lebanese Forces and the Free Patriotic Movement, have recently been busy preparing aid baskets containing cooking oil bottles, grains, canned food and other food items, medication and fuel vouchers. The parties distributed the baskets to their supporters and partisans in the north, south and in Beirut, saying they were helping people amid the economic crisis, especially during the fasting period for both Christians (ahead of Easter) and Muslims (during the month of Ramadan).

Notably, Hezbollah distributed Al-Sajjad cards, which carries the name of a Shiite imam, which people can use in specific grocery stores that the Shiite party opened in Beirut’s southern suburb and in the south, to buy basic goods such as sugar, flour and oil. These goods are available at these stores in Lebanese pounds at below-market prices and at a 30% discount, with the support of Hezbollah. The majority of the products found in these stores are made in Syria, Iran and Iraq and reportedly enter across the border with Syria.

Many Lebanese have criticized Hezbollah’s move since the movement established its own grocery stores instead of focusing its aid on food and coupons like other parties did. Some say Hezbollah's actions show the party to be a state within a state, receiving foreign funding that allowed it to establish large stores and to promote the aid on social media. Other parties do not have the capabilities to do so.

This step seems to go in line with the line Hezbollah Secretary-General Hassan Nasrallah pronounced in a televised speech on June 16, 2020, “We want to tell those betting on our hunger that we will not starve, and Lebanon will not starve.”

Some Lebanese people believed Nasrallah was referring to the Shiite community in particular. To ward off the accusation that he was only helping his own sect, Nasrallah allowed anyone to obtain an Al-Sajjad card, especially individuals from other sects who are affiliated with his allies. It is noteworthy that under the slogan “We will not starve,” Hezbollah promoted the aid it is providing on social media and produced a video to promote the action.

Many Lebanese, however, denounced the partisan aid baskets, saying they brought memories of the days the country was at war with itself. Some said the charitable endeavors were an attempt to absorb popular discontent with the current economic crisis, buy people’s loyalty and support and satisfy the parties’ popular bases, which recently revolted against them due to the deteriorating living situation.

Since the end of 2019, Lebanon has been suffering from a stifling economic and monetary crisis, as the national currency lost its value, the prices of goods and services skyrocketed and poverty multiplied. Signs of misery surfaced through photos of people searching through garbage bins and videos of clashes in supermarkets over buying subsidized food items.

Many say the distribution of food aid and baskets marginalizes the role of the state. Abu Ali Daoud, a 71-year-old man who lives in Tyrr in south Lebanon, told Al-Monitor, “The parties and their leaders want to turn people into beggars within each sect. They are trying to convince people that they cannot go on without them, and they are entrenching people’s affiliation and establishing statelets within the state.”

These parties are the same ruling class that has been in power for decades, and they have participated in corruption and mismanagement and dragged the country into the current crisis. Parties, instead of forming a government that sets an emergency economic plan to prevent Lebanon from sliding further toward total collapse, have opted for aid baskets to be distributed to their supporters.

Meanwhile, the state — which has been talking about allocating ration cards to the poor — has not been able to see this through. Discussions are still underway on ration cards. However, the card would not be a panacea because its launch would coincide with the Central Bank lifting all subsidies on basic commodities (flour, fuel, and medicine), and the prices of goods and services will soar further.

Maroun Makhoul, a young man in his 20s living in Beirut, told Al-Monitor, “The [political] parties are ridiculing the problem and the crisis that the Lebanese are going through, which will not be solved with foodstuffs. Our lifestyle has changed, and so have our education, medical care, and households. Even the quality of our food, clothes, outings, and gatherings have been affected. The problem is much deeper.”

Hussein Fawaz, an activist at the Popular Observatory to Fight Corruption, a local political and legal group dealing with public affairs that also distributes aid to families in need, told Al-Monitor, “We help without discrimination, collect donations and deliver them to the needy. We do not have any political or electoral goals. Meanwhile, partisan aid baskets are being labeled with the name or slogan of a party. This is political, not humanitarian, work. The baskets are drenched in humiliation, and they cannot satisfy people’s hunger or build nations.”

He added, “The citizen’s vote has now become worth an aid basket. This is a conspiracy against people, but not all of them. Many people are not affiliated with parties, and they are not receiving aid. We must ask — what about the people who have no partisan affiliation?”

A worst-case scenario looms with the nearing lifting of subsidies. Reportedly, parties are storing food, commodities, and fuel while people rush to stock up on what is available to face the difficult conditions and the high prices.

In the northern city of Tripoli, people stormed the warehouse of an association while it was distributing food rations in Jisr al-Khannaq on April 14. The incident left one young man dead and two others injured.

Muhammad al-Dehaibi, an activist in local development, told Al-Monitor, “Throughout the past period, since Oct. 17, 2019 [when nationwide ant-government protests broke out], there has been a kind of solidarity between several groups in the heart of Tripoli’s neighborhoods. For a whole year after the crisis, the parties in Tripoli just stood by idly until the dollar soared. After that, they went back to distributing aid baskets to their supporters and to new groups to lure them in. This has raised questions about the timing of aid and the lack of goods in supermarkets while politicians are distributing them!”

He said, “The sectarianism of distribution was flagrant this time. Wealthy Sunnis from areas outside Tripoli contacted us to offer aid in Tripoli rather than in their areas where different sects prevail.”