Israeli police shot and killed a Palestinian man after he allegedly stabbed a soldier and civilian in east Jerusalem Monday. 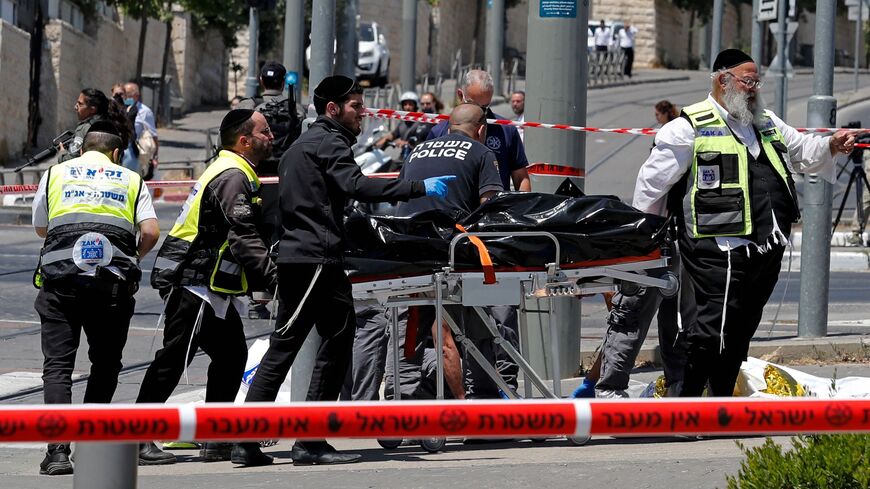 Israeli emergency services transport the body of a man who was shot dead by police after allegedly stabbing two Israeli men at a tram station near the Sheikh Jarrah neighborhood in Israeli-annexed east Jerusalem, on May 24, 2021. - AHMAD GHARABLI/AFP via Getty Images

An Israeli soldier and civilian were stabbed in east Jerusalem on Monday before the assailant was fatally shot by police, highlighting the tensions in the holy city days after a cease-fire halted the region’s worst fighting in years.

First responders said the two victims were both men in their 20s and had stab wounds to their upper bodies. One was injured severely and one was in moderate condition. The Israel Defense Forces confirmed that one of the injured was an IDF soldier who was evacuated to the nearby Hadassah University Hospital for further treatment.

Israeli media reports that police identified the assailant as Jadallah Abad al-Rauf, a 17-year-old resident of east Jerusalem’s Kafr Aqab neighborhood. He was shot by a border police officer and died at the scene.

In a statement released on Monday, Israeli President Reuven Rivlin praised the Israeli police, who “acted quickly to neutralize the terrorist," adding, “We will not allow this accursed terror to raise its head."

The attack took place at a light rail station not far from east Jerusalem’s Sheikh Jarrah neighborhood, where the potential displacement of Palestinian families during Ramadan helped spark the latest outbreak of Israeli-Palestinian violence.

Israel captured Sheikh Jarrah, along with the rest of east Jerusalem, in 1967 and annexed what is considered occupied territory by much of the international community. The Palestinians envision Jerusalem as part of their future state.

The conflict erupted on May 10 when Gaza-based militant group Hamas fired rockets in the direction of Jerusalem, where Palestinians were clashing with Israeli police over access to the revered Al-Aqsa Mosque, the third holiest site in Islam. In response, Israel unleashed airstrikes on Hamas targets in the Gaza Strip.