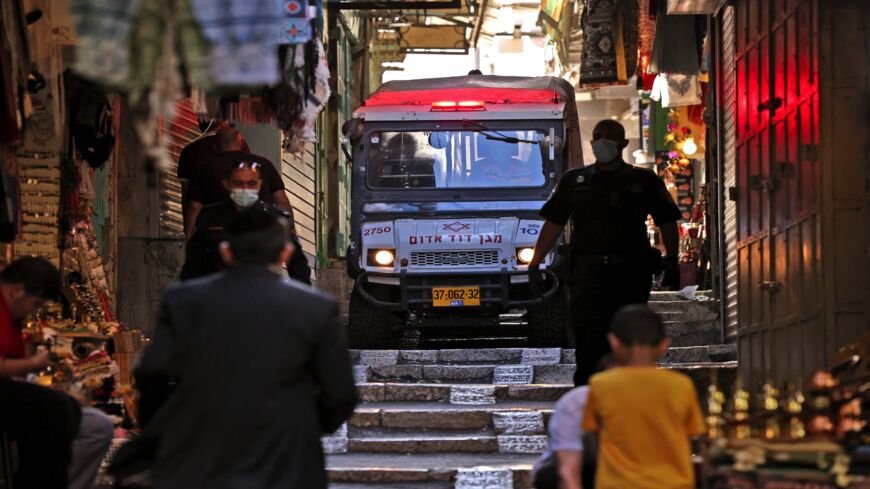 An ambulance arrives at the scene of an attempted stabbing attack in Jerusalem's Old City, on Sept. 10, 2021. Israeli police in a statement said officers opened fire and injured a resident of East Jerusalem, the city's Palestinian district, after he attempted to stab police officers. The assailant died of his wounds, police and the hospital where he was transferred said. - EMMANUEL DUNAND/AFP via Getty Images

Israeli police on Friday fatally shot a man in Jerusalem’s Old City who had attempted to stab officers, amid heightened tensions following a prison escape of Palestinian militants.

According to police, a knife-wielding 50-year-old resident of East Jerusalem tried to stab police officers near the Lion’s Gate of Al-Aqsa Mosque compound, a frequent flashpoint of Israeli-Palestinian tensions.

“Soon after 4 p.m., the assailant … armed with a knife arrived at the officers’ post in the Council Gate in the Old City of Jerusalem and tried to injure the forces there. A quick response by the officers and border guards, who opened fire at the assailant, neutralized him before he could carry out this intention,” the police said in a statement carried by The Times of Israel.

The Palestinian Authority identified the suspect as Hazem al-Julani, a doctor who used to work at a hospital near Tel Aviv. On Friday, he was taken to Hadassah hospital in Jerusalem where he died of his gunshot wounds. According to Army Radio, security forces raided his home and arrested several relatives.

A 19-year-old Israeli officer hit by a ricochet bullet during the incident was injured in the leg and evacuated to Shaare Zedek Medical Center.

Hamas, the militant group that rules the Gaza Strip, praised the attempted attack and vowed “more resistance operations” in the coming days.

The attempted stabbing follows the escape of six Palestinian militants from the high-security Gilboa Prison earlier this week, prompting a nationwide Israeli manhunt and Palestinian demonstrations in the West Bank and East Jerusalem.

At least nine Palestinians were injured in clashes with Israeli soldiers during demonstrations on Wednesday, according to the Palestinian Red Crescent. Hamas and other Palestinian factions had declared a “day of rage” on Friday in solidarity with the escaped inmates.