A massive protest called by a popular cleric and a conference planned by a political alliance linked to Shiite armed factions bear witness to widespread Iraqi support for the Palestinian cause. 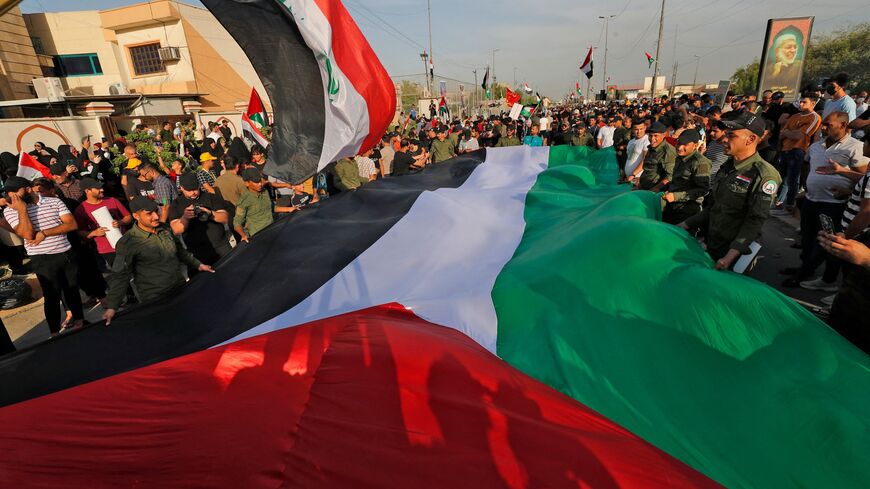 Supporters of the Popular Mobilization Units wave a large Palestinian flag during a demonstration in the capital, Baghdad, on May 20, 2021, in support of the Palestinians. - AHMAD AL-RUBAYE/AFP via Getty Images

BAGHDAD — After Iraqi Prime Minister Mustafa al-Kadhimi and President Barham Salih met May 18 in Baghdad to discuss several issues, a statement was issued stressing that Iraq remains firm in its support for the Palestinian cause and called for international cooperation to stop the “inhuman” attacks on Palestinians by Israelis.

Much of the Iraqi public, whether Shiite or Sunni, pro-America or anti-America, seem to agree that the Israeli attacks on the Palestinians — which have left more than 200 dead and more than 1,000 wounded over 11 days — are a crime that Iraqi representatives should take a stand against.

On May 15, thousands thronged a square and nearby streets that have become widely associated since late 2019 with the monthslong protests that brought down the previous Iraqi government and in which hundreds were killed.

This time, however, the masses held aloft a variety of photos of popular firebrand cleric Muqtada al-Sadr and a giant Palestinian flag, chanting “No to Israel, no to America” and similar slogans to express rage at the latest Israeli attacks on Palestinian areas.

Israel and the United States are inextricably linked in the eyes of many Iraqis and considered “enemies” by most of the Shiite armed groups operating here, both Sadr’s more nationalist Saraya Salam and the Iran-linked “muqawama,” or “resistance axis,” factions.

Both Sadr and Shiite political factions closer to Iran — despite differences of views between them on other matters — want US forces out of Iraq. Many commonly refer to the sprawling US Embassy in Baghdad as a “den of spies.”

Israeli fighter jets began bombing the Gaza Strip on May 10 and more than 220 people, including more than 60 children, have been killed in the hostilities. Several prominent buildings in Gaza have also been destroyed, including a high-rise building housing media outlets. A barrage of rockets was fired from the Gaza Strip at Israel but most of the projectives have been shot down by the Israeli missile defense system or were defective and fell short of the border. A dozen Israelis have been killed.

Arab nations have a lengthy history of supporting Palestinians — at least in words if not always in actions. Iran has long supported Hamas in the Gaza Strip with weapons and funds.

One man at the Baghdad protest wearing a turban marking him as a cleric but who preferred not to give his name — as he said he “could not speak on behalf of Sayyid Muqtada” — stressed that “if Muqtada Sadr says something, then Iraq says it. If Iraq says it, then Muqtada Sadr says it,” indicating that the well-known Shiite cleric was representative of the Iraqi population.

He added, “If Sayyid Muqtada Sadr orders all the Islamic resistance to come together to liberate Palestine, then we will follow his orders.”

There was none of the riotous confusion, diversity, party atmosphere in some places and occasional stone throwing at armed forces in others that had been seen during the massive protests between late 2019 and early 2020. Men with vests marking them as members of Saraya Salam, Sadr’s armed faction, searched bags and patted down men entering the area from side streets, while black Counterterrorism Services vehicles were parked not far away and police a bit farther down the street.

Mahmoud al-Rubaye of the Fatah political alliance told al-Monitor that the alliance plans to hold a conference “in the coming days to implement the recommendations of the supreme religious authority” under Grand Ayatollah Ali al-Sistani.

The Fatah political alliance is led by Hadi al-Amiri and includes several factions close to Iran.

Rubaye said Sistani had “emphasized the necessity and importance of unequivocal support for the Palestinian people in their valiant resistance against the Zionist occupiers and this conference will be part of a series of activities” to this end.

When asked whether this might include the sending of fighters from the “muqawama” to the Israeli border, as some have suggested, he said, “The type of support will depend on the circumstances and available capabilities.”

Some reports claim “muqawama” factions are in talks with the Lebanese Hezbollah and Palestinian factions to send experts, aid and possibly fighters from among those already deployed to Syria to help in the fight against Israel.

Amiri, meanwhile, called May 19 for Iraq to establish “full control” over its airspace and bases, noting in particular the need for foreign military forces to leave the Iraqi bases of Ain al-Asad in the Sunni-majority Anbar province and Harir in the Kurdistan Region of Iraq. These two bases are where most US military left in the country are stationed.

Abbas al-Zaidi, from the political office of the armed group Kataib Sayyid al-Shuhada, told Al-Monitor via WhatsApp that though Gaza rocket launching might seem ineffective, it had achieved some important things, especially given the immense imbalance of power and weaponry between Israel and the Palestinians.

Kataib Sayyid al-Shuhada is a muqawama faction close to Kataib Hezbollah and has men deployed across the border in Syria as well as in Iraq.

Zaidi listed several points that he said he thought were noteworthy, including that the rocket attacks had “directly affected air traffic in the region” as well as “all other land and sea transportation” and forced “more than 7 million Zionists into bomb shelters.”

He added that the rocket attacks had also “severely damaged the tourism sector on which Israel depends a great deal from not only an economic standpoint but also at the political, propaganda, and ideological levels.”

Zaidi said, “These rockets revealed to a large extent the crimes and terrorism of the Zionist entity and recalled the massacres that it has committed against the Palestinian people and others.” He added that the “key question is this: If this was the result of those rockets with such limited capacity, what would happen if all the capabilities of all the sons of the resistance axis were to unite?”