The commander of an Iraqi Popular Mobilization Unit accused of involvement in murder was released June 9 after the court said it failed to find sufficient evidence. 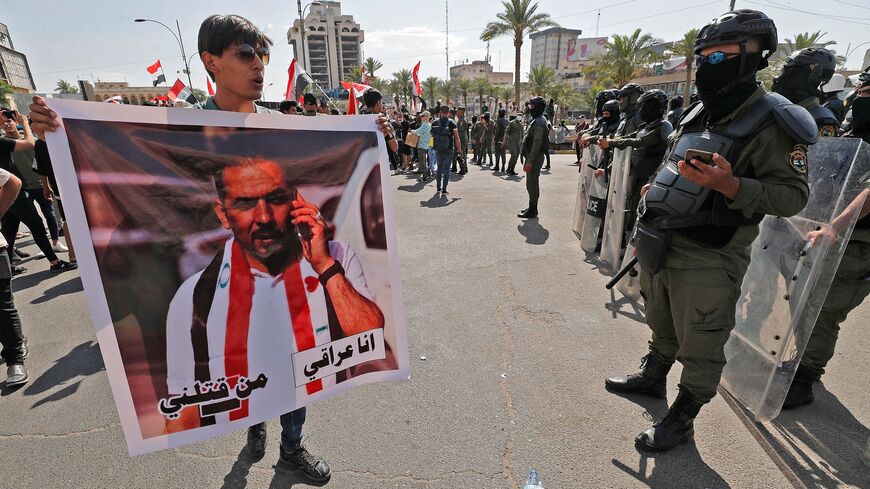 Iraqi security forces deploy during a demonstration in Tahrir Square in Baghdad on May 25, 2021, to demand accountability for a recent wave of killings targeting activists. The placard depicts renowned anti-government activist Ehab al-Wazni, who was shot dead in an ambush earlier in the month. Wazni's family said PMU commander Qassim Musleh had sought Wazni's death, but Musleh was released from custody for lack of evidence on June 9, 2021. - AHMAD AL-RUBAYE/AFP via Getty Images

Qassim Musleh, the commander of the Shiite-led Popular Mobilization Units (PMU) for Iraq’s western Anbar region, was released  June 9 after being held for almost two weeks under the country’s antiterrorism law.

Later in the day, the commander of the Quds Force of Iran’s Islamic Revolutionary Guard Corps (IRGC), Ismail Ghaani, arrived in Baghdad for talks of an unspecified nature. In the evening, three rockets hit the Balad air base, according to the Iraqi Security Media Cell.

The base was previously used by US-led international coalition forces that left as part of a gradual withdrawal but still hosts foreign contractors providing aircraft maintenance.

Musleh had been accused of involvement in activists’ murders in his home city of Karbala as well as corruption.

Ehab al-Wazni, a protest coordinator and well-known activist in Karbala, was shot and killed by two men on a motorcycle May 9. Wazni’s mother claimed on video that Musleh had vowed to kill her son. Fahim al-Tai, the other activist Musleh was accused of playing a role in the killing of, had been killed a year and half before in a similar way in the same city.

Musleh was the deputy chief of security at the Iman Hussein shrine in Karbala. Then he moved to a new faction, Tufuf. He had become PMU forces commander for Anbar when this journalist interviewed him both in 2018 and in 2019 at his office in Karbala.

A senior government official told Al-Monitor that Musleh had been released due to pressure on the head of Iraq’s Supreme Judicial Council, Faik Zeidan. Iraq’s judiciary has long been criticized for being subject to pressure from political parties and armed groups.

A clarification issued by the Iraqi judiciary June 9 relative to the case and sent to Al-Monitor said, “No evidence was presented against” Musleh to the investigative court and that his passport proved he was not even in the country when the killing took place.

It added that no evidence had been found to prove even his indirect involvement “through incitement or other means” and that the Wazni family had not “provided any evidence when writing their testimonies,” and that thus — “noting that the crime of assassinating the activist Al-Wazni is considered a terrorist crime the perpetrator of which is subject to the death penalty” — the decision had been made to release him.

The Shiite-led, government-incorporated PMU includes brigades from the so-called “muqawama,” or “resistance” factions, and ones that are associated with Iraqi’s shrines and answer to Grand Ayatollah Ali al-Sistani.

The “muqawama” factions also have fighters across the border in Syria such as Kataib Hezbollah and others near the Iraqi-Syrian border where Musleh is officially in charge of PMU forces. Many are avowedly loyal to the IRGC.

Abbas al-Zaidi, from the political office of the PMU faction Kataib Sayyid al-Shuhada, commented on Musleh’s arrest and subsequent release to this journalist in a WhatsApp message June 9, saying the PMU commander had “committed a ‘major crime’ when he prevented the entry of the killers from Syria to Iraq under the protection of the American occupation forces and stood as an impenetrable dam with his brothers, and this is considered a crime according to the point of view of those who do not belong to the homeland.”

The killers he referred to are the Islamic State; many “muqamawa” factions believe the Islamic State is part of a US-Israel conspiracy despite the major role played by the US-led coalition and its air power in the fight against the international terrorist group in Iraq.

He then continued on to Karbala, where he met a crowd waiting for him and said he wanted to thank his family and the people of Anbar, “who played a major role in supporting us, and we are indebted to them.”

There is still a great deal of distrust toward the Shiite-led PMU among the local Sunni Anbar community. Locals, including Anbar security forces, will often privately refer to the PMU as “the same as IS,” while acknowledging that these armed groups’ power and territorial control preclude any action against them for the moment.

Incidents in which hundreds of young men and boys from the region went missing are uppermost in the minds of their relatives who still seek information on their whereabouts, or possibly justice were the men found to have been killed.

Forces within and/or closely linked to brigades within the PMU have been accused of being behind these disappearances. Former Anbar governor and present parliament speaker Mohammed al-Halbusi told this journalist in a 2018 interview that he believed Kataib Hezbollah was either continuing to hold many of the men who disappeared or knew where they were.

Musleh and the Tufuf Brigade he commands have developed working relationships with local tribal figures and other dignitaries in the town of Qaim on the Iraqi-Syrian border.

As Al-Monitor previously reported, Musleh financially provided for a female gynecologist and obstetrician when the town did not have one for months after it was liberated in late 2017. He also arranged for rubble to be hauled away from parts of the local hospital damaged in the fighting, as he told this journalist in the 2018 interview and which was confirmed by Anbar medical staff and locals during her multiple visits to the border town over the years.

Some locals in the border area have, however, claimed to Al-Monitor that Musleh answers to Kataib Hezbollah and that his currying of favor with the local community is part of wider strategy by the “resistance factions.”

“Muqawama” factions have long held and used a parallel border crossing south of the official one to get men and arms into Syria to fight on the side of the Syrian government forces. The factions have been accused of being involved in other sorts of smuggling and illicit activities in the areas as well but claim they are simply protecting Iraq.