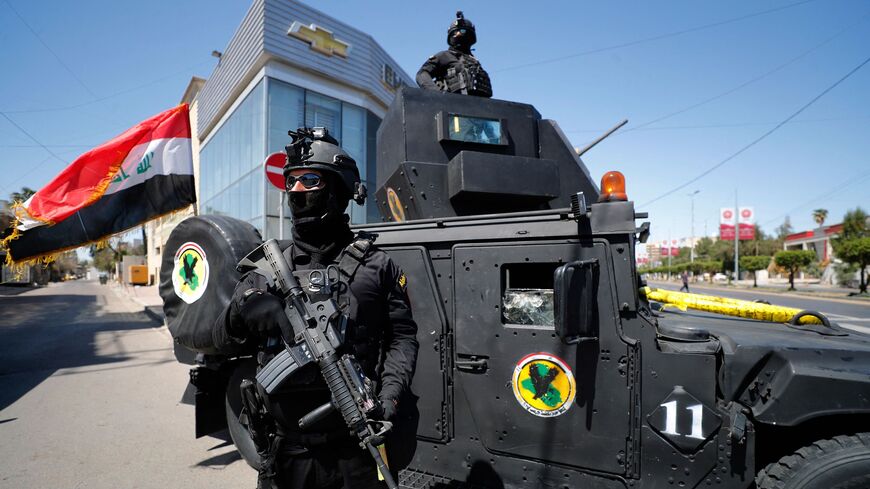 Members of the Iraqi Counter-terrorism Service are deployed in the streets of the capital Baghdad on March 27, 2021. - AHMAD AL-RUBAYE/AFP via Getty Images

BAGHDAD — A day after a major protest demanding greater accountability in Iraq, especially as concerns the unsolved murders of several activists, the commander of a faction affiliated with the Popular Mobilization Units was arrested in a move that was followed by allied factions entering Baghdad’s Green Zone in a show of force.

Qassim Musleh, who was arrested on terrorism charges, is the head of the Tufuf Brigade, the 13th Brigade in Iraq’s Popular Mobilization Units, and PMU commander for Anbar including the Iraqi-Syrian border area.

A senior government official told Al-Monitor that Musleh was suspected of being behind the murder of several activists in his hometown of Karbala including Ihab al-Wazni, who had helped coordinate the Karbala component of the protest movement that started in late 2019 and that brought down the last government. He was also vocal about his opposition to Iranian influence in the country and armed groups linked to Iran.

Wazni was shot outside his home on May 9 by unknown assailants on motorcycles. His assassination was the latest in a long string of similar murders of activists and journalists in the country for which the culprits are seldom if ever brought to justice.

A security source in Anbar told Al-Monitor that Musleh was also believed to have been behind the December 2019 drive-by shooting of another Karbala activist, Fahim al-Tai.

One of its main demands of the May 25 protest was that those behind these killings be found and prosecuted. Photos and drawings of Wazni and others including the well-known terrorism and security analyst Hisham al-Hashimi were held aloft during the demonstration, which started peacefully but later became violent.

Hashimi was also killed outside his Baghdad home in July 2020 by two men on a motorcycle, captured in a surveillance video. He was frequently interviewed by both the national and the international press, including Al-Monitor, for years on terrorism-related matters but shortly before his death had begun to more vocally support the protest movement and oppose Iranian influence in Iraq.

According to some news outlets, Musleh was also accused of corruption and being behind attacks on bases hosting forces from the international coalition against the Islamic State.

Al-Monitor interviewed Musleh in 2018 about his brigade’s operations in the Anbar region and in 2019 on the massive anti-government protests at that time.

Both interviews were conducted in the Karbala shrine complex, where he held the position of deputy head of security.

In the first, Musleh railed against the “weakness” of the Iraqi army and claimed that some of the officers from the 7th Division, which is currently deployed to the border area near Qaim, had “spied” on his brigade and reported on it to the US forces at the Ain al-Asad base, also in western Anbar.

This base was targeted by a barrage of Iranian missiles in January 2020 after the United States killed Iranian commander Qasem Solaimani and former deputy PMU chief Abu Mahdi al-Muhandis in a targeted drone strike at Baghdad airport earlier that month.

Musleh had fought alongside both men and was close to Muhandis. He had lived in exile for years in Iran during the period of former Iraqi dictator Saddam Hussein and had also spent time in US custody in Iraq in the post-2003 period after fighting against US forces.

In Sunni-majority western Anbar where his brigade operates, locals have over the years repeatedly complained to this journalist about alleged land grabs and oppression by Shiite armed groups, by both factions incorporated into the government and others that are not.

Shortly after Musleh’s arrest on May 26, armed factions entered the Green Zone as a show of force and reports circulated that he was released as a result.

Previous arrests of suspects linked to pro-Iran factions since the beginning of Prime Minister Mustafa al-Kadhimi’s term in May 2020 had led to similar situations: shows of force and threats and then a release of those arrested. But this time, the suspect reportedly remains in custody and the forces have for the moment withdrawn from the streets.

The spokesman for the Iraqi commander-in-chief, Gen. Yehia Rasool, tweeted that Musleh “will remain in the custody of the Joint Operations Command until the end of the investigation.”

The US National Security Council unsurprisingly expressed unwavering support for Kadhimi, saying in a May 27 tweet that: "We strongly support PM Kadhimi & Govt of Iraq’s commitment to uphold rule of law & pave the way for free & fair elections. Anyone who targets Iraqi citizens must be investigated pursuant to Iraqi laws. We condemn those who seek to undermine Iraq’s stability with acts of violence."

However, also Ammar Hakim of The National Wisdom Movement as well as former prime minister and Nasr coalition chief Haidar Abadi joined other leaders in condemning the PMU factions's aggressive moves against the state, calling for their full compliance with the government.