Users of the popular prediction exchange website can now place bets on Iran’s upcoming elections in addition to bets on Israeli politics. 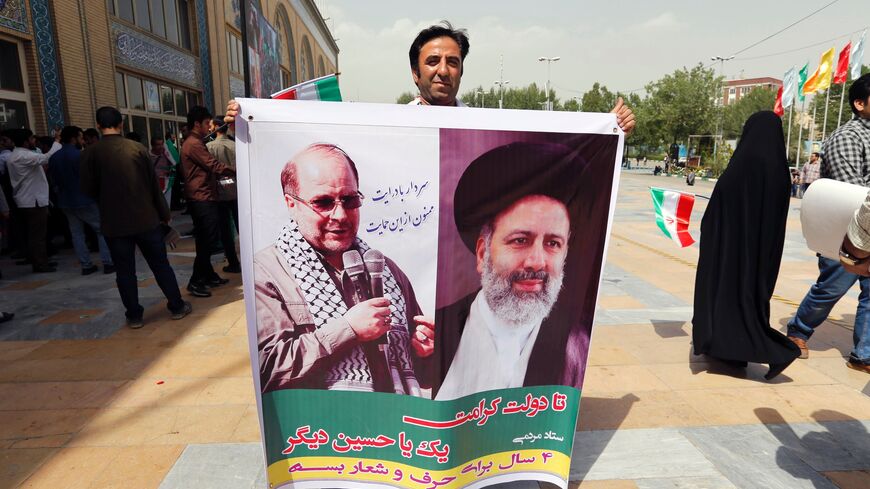 A supporter of Iranian presidential candidate Ebrahim Raisi holds Raisi's portrait (R) on May 16, 2017, in Tehran, alongside that of Tehran Mayor Mohammad Bagher Ghalibaf (L) after Ghalibaf's withdrawal from the race. While Raisi still lost the 2017 election to President Hassan Rouhani, Raisi is favored in this year's election, with Ghalibaf, now speaker of parliament, seen as a long shot. The portraits were held up outside a campaign rally at Imam Khomeini Mosque. - ATTA KENARE/AFP via Getty Images

Users of the popular prediction website PredictIt can now place bets on who will win the upcoming Iranian presidential election.

The New Zealand-based PredictIt is a prediction market where users can bet money on specific outcomes to win cash. People buy shares of a specific “yes or no” outcome — in this case, who will win Iran’s election. At any given time, one yes and one no share theoretically add up to US $1. People can sell these shares, which may fluctuate in value, anytime the market is open. Once an event takes place, PredictIt cashes out the winners at $1 per share. The company takes a fee from any earnings.

Users can buy yes or no shares on the winning prospects of a variety of candidates in the market titled “Who will win the 2021 Iranian presidential election?” At one point Tuesday, judiciary chief Ebrahim Raisi was the front-runner with a yes share valued at 55 US cents, down 6 cents, although at one point it was down at least 16 cents. However, the site said the cost of purchasing a yes share was 56 cents and a no share was 59 cents. The prices of the yes and no shares do not always add up to a dollar for various reasons, particularly if there is a lot of trading volatility.

The speaker of the Iranian parliament, Mohammad Bagher Ghalibaf, and former defense minister Hossein Dehghan are among the other options in the election market, with each trading at around 20 cents a yes share. The price of a yes share for Ghalibaf on Tuesday was listed at 20 cents and a no share at 83 cents.

The other options were all trading at 4 cents or less per yes share, reflecting low market confidence in their chances of victory.

PredictIt’s market focuses heavily on US politics, but the Iranian presidential election market is not the company’s only involving the Middle East. There are also several markets related to Israel's March 23 election, including one that took bets on Israeli Prime Minister Benjamin Netanyahu remaining in power by the end of June and another on who will be prime minister at the end of 2021.

The latter market showed the religious nationalist Naftali Bennett leading with 61 cents for a yes share and 43 cents for a no share at one point Tuesday, reflecting media reports that Bennett could serve first in a rotation prime ministership with the centrist Yair Lapid, who has been tasked with forming a new government. However, at a later point Netanyahu yes shares were listed at 39 cents and Bennett shares at 37 cents.

The market on Netanyahu remaining as prime minister until the end of June showed prices of 66 cents for a yes share and 38 cents for a no share Tuesday. Several commenters on the market page argued that the current conflict in Israel helps the longtime prime minister stay in power, even though he failed to form a government by his deadline last week. Some Israelis have also said Netanyahu could benefit from the Jerusalem unrest to this end.