Independent candidates Kais Saied and Nabil Karoui have emerged from the first round of Tunisia's presidential race. 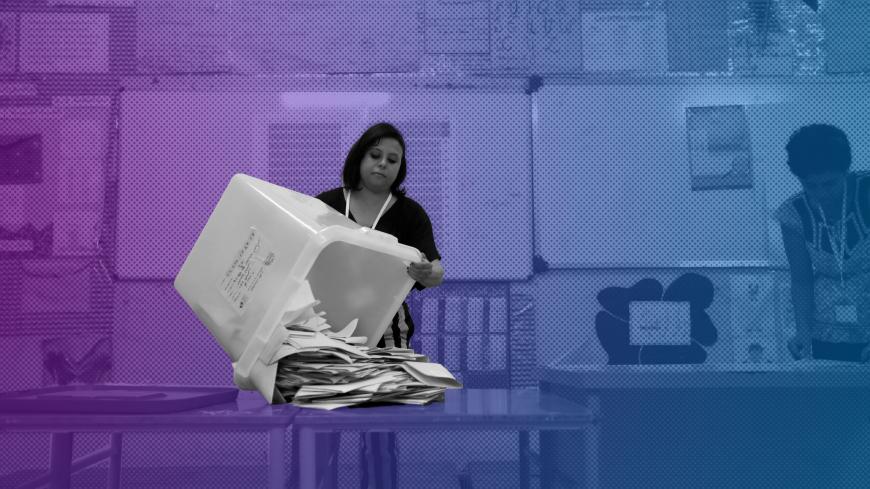 In an election marked by low voter turnout, initial results suggest that populist candidates Nabil Karoui and Kais Saied have made it into the second round of voting.

Saied and Karoui's passage to the next round of voting, scheduled for November, is the most emphatic rejection of Tunisia’s political class since the revolution of 2011. Many of Tunisia’s sacred cows have fallen, from technocrat Prime Minister Youssef Chahed to Defense Minister Abdelkarim Zbidi and moderate Islamist Ennahda’s Abdelfattah Mourou, all of whom are perceived as having presided over the country’s gradual decline and fall.

“I want the government to provide jobs and money to young people for projects,“ said Khalil Mlouki, a univeristy graduate who was among the 54% of Tunisians to withhold their vote. Mlouki, who has been unemployed since 2015, explained, “The current generation of politicians is no good.”

Others such as IT developer Rafika Barhoumi, rejected the candidates en masse. “I’m not interested and I don’t like any of them,” she said.

News of the death of Chadlia Saïda Farhat, the wife of deceased President Beji Caid Essebsi, whose own passing prompted Sunday’s vote, gave the sense of an old order giving way to an untested new one. The sense of change was enhanced by reports of the grave illness of Tunisia’s former autocrat, Zine El Abidine Ben Ali, who is reportedly being treated for prostate cancer in Saudi Arabian exile.

Much of Tunisia’s rejection of its political class is understandable. After a 2011 revolution in the name of jobs and freedom, for many, the democratic systems have not delivered on their promises. Unemployment, one of the main drivers of rural discontent in 2010, has only increased. In 2010, joblessness stood a little over 13%. Today, it sits at 15.3%. With every month that passes, the cost of living rises as the value of the national currency, the dinar, falls. Institutions intended to protect the country’s democracy, such as the Constitutional Court, remain largely stillborn, while in parliament, parties remain locked in perpetual squabbling. Progress remains elusive on all fronts.

By the time of the campaign, squabbling among Tunisia’s 200-plus political parties had left many feeling disenfranchised. “At first there was disinterest,” political analyst Youssef Cherif told Al-Monitor, “but when the actual campaign started, especially with the multi-candidate debates, people started paying attention.” However, anticipating the low turnout of later that day, Cherif concluded, “most people are worried about their economic situation and complain that politicians can't change their lives. The priority of the next president (and government) is to reawaken the people's interest in politics.”

Saied and Karoui both look likely to achieve that end.

Karoui has been held in Mornague prison on charges of tax evasion and money laundering since his arrest on Aug. 23. Denied participation in the country’s landmark presidential debates and the opportunity to interact with his electoral base, Karoui nevertheless appears to have outpolled his establishment rivals. Pitching himself as the anti-system candidate, Karoui has made significant use of broadcasts featuring his delivery of aid to the country’s poorest while simultaneously railing against the failings of an uncaring government, especially Chahed.

Repeated official harassment, from having his offices raided by armed police in May to coming within inches of being excluded from the race entirely after parliament passed an amendment, only served to cement the perception of Karoui as the ultimate opponent of the status quo. Karoui remained in the race when the former president refused to sign the bill, and his reputation as a modern-day Robin Hood persists. Cast as a political prisoner by his supporters, one parliamentary candidate from his Heart of Tunisia Party went so far as to frame him as the Nelson Mandela of Tunisia.

Saied speaks to a similar vein of discontent within Tunisian society. Though his is a more dispassionate tone, he offers a no less radical solution. Speaking in formal Arabic and often seeming ill at ease, Tunisians have long known the professor and former political commentator as The Robot. Standing on an idiosyncratic platform, Saied has referred to homosexuality as an illness, suggested replacing the country’s parliament with an organization more reflective of the needs of the country's municipal councils and declared early in the race that he refused to vote, even for himself.

The final round of Tunisia’s landmark election has yet to be determined but is likely to fall in October and could come as early as Sept. 29.