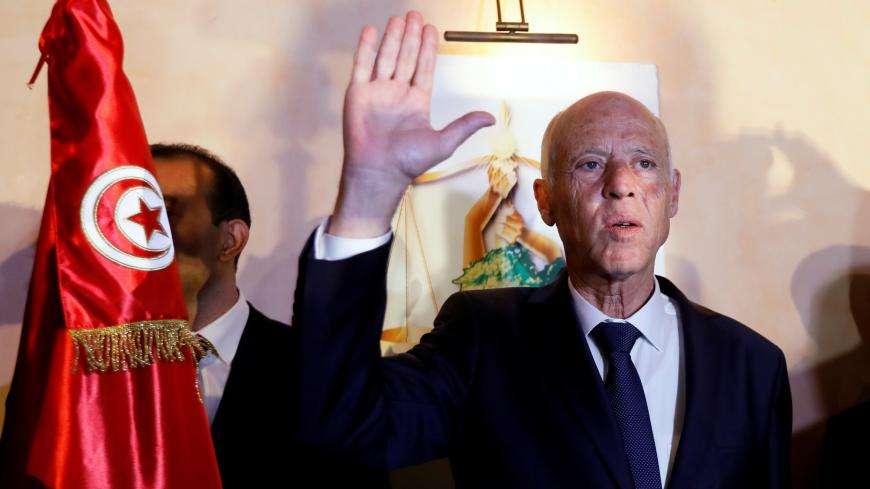 A conservative law professor known for his probity and prudish views on same-sex relationships was elected in a landslide in today’s presidential runoff in Tunisia. Exit polls from Sigma Conseil showed Kais Saied winning with 77% of the vote compared with 23% for media magnate Nabil Karoui.

Max Gallien, an analyst who closely monitors Tunisia, noted that another exit poll by Emrhod Consulting suggests that Saied won every single governorate and was particularly strong in the country’s south.

Saied’s resounding victory speaks to Tunisia’s rejection of the status quo, already signaled in the miserable performance of the  mostly secular parties who have led the country since 2014, with one notable exception, the pro-Islamic Ennahda. Some 90% of voters ages 18-25 cast their ballots for the 61-year-old Saied, according to Youssef Cherif, a Tunis based analysts and head of Columbia Global Centers, Tunis. Saied, who frowns on equal inheritance rights for females, has progressive views on radically decentralizing power.

While Ennahda did poorly in the first round of presidential elections Sept. 15 and did not qualify for the runoff, the party finished first in Oct. 6 parliamentary elections. Its endorsement of Saied is believed to have helped. Karoui’s Qalb Tounes (Heart of Tunisia) was second in the parliamentary vote.

The scale of Karoui's defeat also means that the candidate, who was sitting in a Tunisian jail on fraud and money laundering charges until days before the elections, is less likely to contest the outcome, said Sharan Grewal, a visiting fellow at the Brookings Institution. Karoui had claimed that his jailing had lowered his support. Early estimates indicated that turnout was heading to be higher than the previous two elections, at around 60%, an encouraging sign that Tunisia’s infant democracy remains vibrant if troubled.

What’s next: With no clear winner in the parliamentary elections it remains unclear what sort of coalition will emerge, if any at all. As the first-place finisher, Ennahda will likely be asked to try its hand at forging a government. But will it sit down with Qalb Tounes, especially given the round rejection of its leader in the presidential runoff? The country faces enormous challenges with high unemployment, especially among its young people, and rampant corruption. Failure to address these issues may cool Tunisia’s embrace of the democracy its people wrested for themselves by rising up in the 2011 Jasmine Revolution against the dictatorship of the Zine El Abidine Ben Ali (who died in Saudi Arabia last month) and bolster extremists who are down — thanks to a determined campaign waged by security forces with the help of Western governments — but not out.