Exit polls from Sunday's nationwide parliamentary elections suggest that the pro-Islamic Ennahda came in first, followed by the newly established Qalb Tounes, or Heart of Tunisia, led by jailed tycoon Nabil Karaoui, who will be in the Oct. 13 presidential runoff. 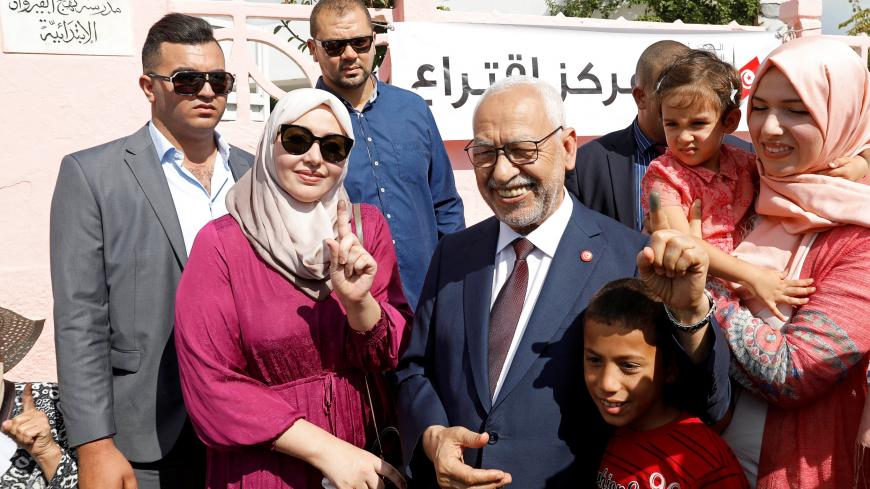 Rachid Ghannouchi, leader of Tunisia's moderate Islamist Ennahda party, shows his ink-stained finger as he poses with his daughter after casting his ballot at a polling station during the parliamentary elections in Tunis,Tunisia, Oct. 6, 2019. - REUTERS/Zoubeir Souissi

Exit polls from today’s nationwide parliamentary elections suggest that the pro-Islamic Ennahda came in first, followed by the newly established Qalb Tounes, or Heart of Tunisia, led by jailed tycoon Nabil Karaoui, who will be in the Oct. 13 presidential runoff. The polling outfit Sigma Conseil said Ennahda had received 17.5% and Qalb Tounes 15.6%. Emhrod, another polling company, also showed Rachid Ghannouchi’s Ennahda in the lead with 18.3% and Qalb Tounes with 16.3%.

Ghannouchi, who ran for the first time since Tunisia’s 2011 Jasmine Revolution, won a seat. This might allow him to become parliament speaker, a position he is thought to be coveting after remaining out of government all these years.

Why it matters: It appears that no one party will have won the requisite 109 seats in the 217-seat legislature to govern alone, meaning the country will once again be ruled by a coalition. A key question is whether bitter rivals Ennahda and Qalb Tounes could come together to share power. Qalb Tounes has sought to portray Ennahda as Islamist radicals while Ennahda has played up Karaoui’s imprisonment on tax evasion and money-laundering charges. Even together, the two leading parties would likely need the backing of at least two smaller parties to form a coalition.

Seifeddine Makhlouf, a pro-Islamic lawyer who has defended militants in court, saw his Karama party pull in fourth, according to Sigma Conseil.

Ennahda’s secular partners in the former coalition were decimated, however, with Nidaa Tounes scoring a measly 2.6%, according Emhrod’s exit poll. Prime Minister Youssef Chahed’s Tahya Tounes, which broke off from Nidaa Tounes in a power struggle, fared better, netting 5.2%. This would give Chahed 17 seats under Tunisia’s proportional representation system.

The exit polls did not, however, include results for Tunisian citizens living overseas. They account for 18 seats in the parliament.

Domino Effect: Chahed, a technocrat who has been ramming through unpopular International Monetary Fund reforms, is seen as a safe pair of hands by Western donors as the country grapples with massive economic problems — high unemployment of young people, rising inflation and a bloated public sector, but to name a few. The government’s failure to improve living standards and root out rampant corruption is seen as the main reason voters backed outsiders in the Sept. 15 presidential race. Constitutional law professor Kais Saied and Karoui will face off Oct. 13 to become the country’s next president.

Karoui has accused Chahed of putting him behind bars to deprive him of victory.

Ennahda’s candidate was third and Chahed eighth in the presential race.

Disaffection with the political system was palpable with about 41.3% turnout for the parliamentary elections, slightly lower than the 45% of voters who cast their ballots for the presidential primary.

Ennahda’s success is a sign of its continued dominance as Tunisia’s best-organized movement.

Today’s results suggest that Karoui may be losing steam and that Ennahda’s decision to endorse Saied, who has no party of his own, paid off.

Know more: Read Amberin Zaman’s piece on how the city of Sidi Bouzid, the birthplace of Tunisia’s revolution, emerged as a barometer of the country’s progress ahead of the elections.