The series "The Alexandria Killings" is based on the true events of a killing spree that has kept the Egyptian public guessing between innocence and guilt ever since the British colonial rule. 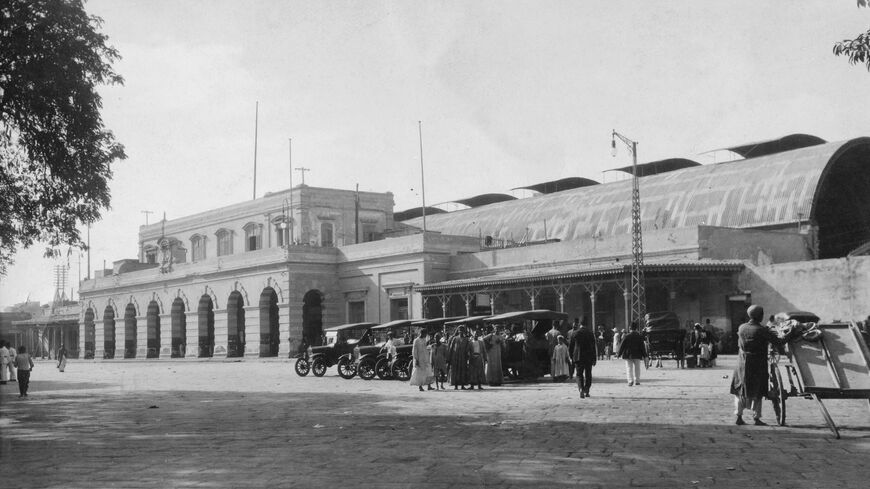 A railway station (now demolished) in Alexandria, Egypt, circa 1920. The station was the first to be built in Egypt. - General Photographic Agency/Hulton Archive/Getty Images

Cairo — Perhaps there has been no true crime story in Egyptian modern history that inspired dramatists, filmmakers and writers the way the almost one-century-old saga of convicted female serial killers Raya and Sakina Hamman did.

Most recently, Oscar-winning Irish writer-director Terry George and celebrated Egyptian author and scriptwriter Mariam Naoum have teamed up to draft a new thriller TV series titled "The Alexandria Killings." The TV series is based on the true events of a serial killing spree by the two notorious sisters, Raya and Sakina, set in Egypt's Mediterranean city of Alexandria during the British colonial rule of the country.

The new adaptation, in both Arabic and English, will be co-produced by Dubai-based Front Row Filmed Entertainment and London-based RocketScience via their Middle East joint venture Yalla Yalla and directed by George.

According to a statement released by the producers end of April, the new series will chronicle the story of the two siblings’ brothel operation, which involved an influential circle of Egyptian and British officers, informants and statesmen and the eventual downfall of the sisters and their accomplices.

“Not only will the TV series focus on Raya and Sakina, it will also depict the era when they lived and the events surrounding it, mixing fiction with reality,” Naoum told Al-Monitor.

"I look forward to collaborating with a truly international team of talented producers and storytellers to investigate the remarkable true story of the Hammam sisters," the statement quoted George as saying.

"I am particularly delighted to be working with renowned Egyptian writer Mariam Naoum to tackle the subject matter that while containing all the captivating elements of a legendary crime also encompasses global themes of sexism, jealousy, greed and lost love. This will be a thrilling and entertaining journey," he continued.

The producers further announced that the show would be the first part of a true crime anthology series set in various periods and places across the Middle East.

The Hammam siblings were found guilty of kidnapping, robbing and murdering at least 17 women with the help of their husbands and two other workers. The victims’ bodies were found by the police buried under the killers’ house in the poor Labban neighborhood.

The story of Raya and Sakina inspired about a dozen other Egyptian works, namely books, films and theatrical performances, even including comedies, with fictional details in some cases in order to add more suspense to the tale.

In an article published in local state-run Al-Ahram weekly back in 1999 — titled “The women killers" — late prominent historian Yunan Labib Rizk recounted the rise and fall of Raya and Sakina as per the news stories published in the daily Arabic version of the newspaper around the time they were arrested until they were put to trial and convicted.

Rizk wondered why their tale did not intrigue historians in Egypt the way it should have.

“It is curious that [the case] attracted little attention among historians, perhaps out of the belief that [it] was irrelevant to the general course of political developments,” he wrote.

Nevertheless, there may be another side of the story. In 2015, scriptwriter Ahmed Ashour stirred a controversy that made news headlines at that time, confidently putting forward a hypothesis, based on 10-year independent field research, concluding that Raya and Sakina were innocent.

Ashour later wrote a feature film, expected to be released soon in Egypt, which refutes the official narrative of the case and defends the two sisters, titled "Baraet Raya wa Sakina" ("The Innocence of Raya and Sakina").

In the film, Ashour claims that Raya and Sakina were framed by the local authorities as well as the British occupiers for being involved with the German intelligence in resisting and killing English soldiers and officers in Alexandria. These incidents occurred during the time surrounding the 1919 popular revolution that demanded the liberation of Egypt.

“Raya and Sakina began their series of ruthless crimes in Alexandria in November 1919. It is not inconsequential that the Egyptian port city at this time also saw the famous popular uprising that pitted its major protagonists — stone-throwing children — against the forces of the British Empire,” Rizk wrote.

“For the first time in Egypt’s history, Egyptian women played an influential role in fighting the occupation. And by spreading rumors and fear across the city that women were subjected to kidnappings, the authorities and the occupiers thought that women wouldn’t go down the streets to protest against colonialism, fearing for their lives,” Ashour argued.

Based on the case file, Raya and Sakina never pleaded guilty.

“Raya’s teenage daughter Badeea was the one who told the police and prosecution about the killings and the buried corpses. She was later killed in a fire that broke out in the orphanage where she was placed after the arrest and execution of her mother and the imprisonment of her father,” Ashour said.

He added, “There were also clear discrepancies in the police investigations and witnesses’ accounts in the original case file, which I’m going to present in my film."

But whether the two sisters were guilty or not, the truth remains a mystery.

“I can neither refute nor confirm Ashour’s theory. He may be right and he may be wrong,” Naoum concluded.