Egyptians disagree over whether or not there is sufficient documentation available to produce a film depicting the political conflicts that led to the January 25 Revolution and the ousting of President Mohammed Morsi following the June 30, 2013, protests. 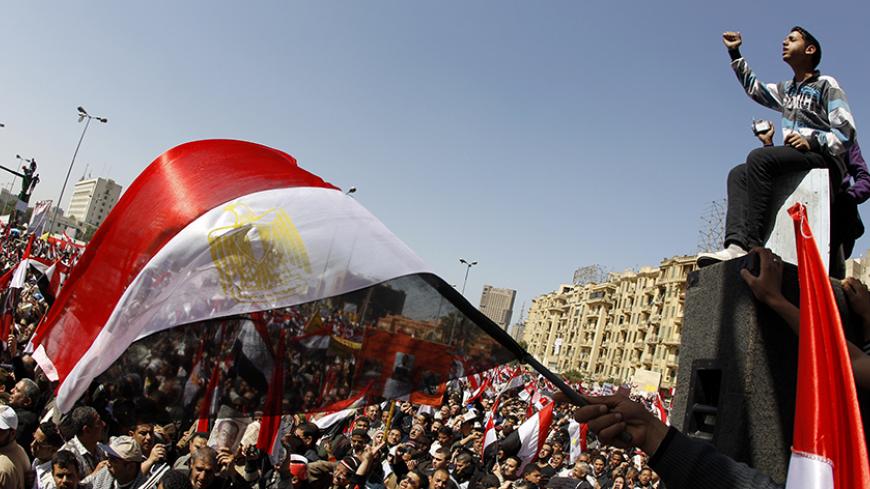 CAIRO — Throughout the month of May, Egyptian media outlets were at each other’s throats to obtain and publish leaks about “Days of Wrath and Revolution,” the first film depicting the political conflicts between the revolutions of Jan. 25, 2011, and June 30, 2013. The leaked information has triggered the interest of the public, as the film has an actor playing the role of a man who is now the sitting Egyptian president, Abdel Fattah al-Sisi.

The buzz started when Youm7 newspaper published a story May 7 indicating that several Egyptian actors will star in a film that is expected to be the biggest production in the history of Egyptian cinema. The film tells the details of political events that took place in Egypt from the January 25 Revolution to the the events taking place in late June and early July 2013. Famous actor Ahmed el-Sakka plays the role of Sisi, while Ahmed Rizk plays the role of President Mohammed Morsi; Sisi, who became president in 2014, headed the armed forces when he ousted Morsi in 2013.

The cast also includes Nabil el-Halafawi as Defense Minister Mohamed Hussein Tantawi and Adel Imam, the most renowned Egyptian actor, as himself. Mohamed Ramadan and other actors appear as fictional characters. Waheed Hamed wrote the script and Mohammad Sami directed the film, according to Youm7.

On May 12, during a live streaming on his Twitter page, Ramadan said he would star alongside Sakka in a film written by Hamed and directed by Sami. He did not reveal details or the names of the remaining actors.

In light of this, the public became increasingly preoccupied with the news of the film, and newspapers and TV shows raced to find out more from sources close to the producers without revealing their names. But the film producers were not giving official statements.

Rizk finally broke the silence in a press statement to Ain al-Mashaheer magazine May 24, saying, “I am participating in the film ‘Days of Wrath and Revolution’ written by master writer Hamed. I think this will be one of the biggest cinematic productions in Egypt. Unfortunately, I cannot reveal the character I will play out of respect for the film confidentiality terms.”

Some wonder whether it is too early for the 2011 and 2013 revolutions to be examined and put in proper perspective by the cinema industry.

Film critic Nader Adli told Al-Monitor, “The period spanning from 2011 until now is limited and insufficient for historical documentation. Many citizens still do not know whether they support the events or object to them. I think the cinema producers themselves are confused.”

He added, “Some of former President Hosni Mubarak’s supporters believe the January 25 Revolution was a conspiracy from foreign intelligence against Egypt. We still don’t know whether or not this is true. Advocates of the Muslim Brotherhood regime think the state institutions conspired against them, while some rebels claim they were victims of political deals between the Brotherhood and the military council in 2011 and 2012. The picture remains unclear. Even if some cinema producers made up their minds about the events, they still don’t have enough evidence to convince the public of their perspective in a cinematic production.”

Asked about “Days of Wrath and Revolution,” Adli said, “The news about the film is intriguing. Hamed is a veteran scriptwriter, and I think he can look at the revolutions from humanitarian and social perspectives without falling into the trap of a false historian, as I previously said. It is better to wait and see [the film] before judging.”

Asked about films about the January 25 Revolution and the events surrounding June 30, 2013 and beyond, he said, “Most productions have been weak. Egyptian cinema depicted the revolution in films such as 'Good Luck' [2012], 'Tek Tek Boom' [2011] and 'After the Battle' [2012]. But they tackled this historical stop superficially. Even the film 'Clash' [2016] cannot be classified as historical archiving of the post-June 30 period. It only reflects the clashes between security forces and Brotherhood supporters in the Egyptian streets, which is the only accurate detail from that period.”

Art critic Rami Abdul Razek told Al-Monitor that it is too early to provide a history of the “period spanning from the 2011 revolution until now … because most producers lived through this stage and have an opinion about it. A contemporary of this phase is its worst historian because he lacks impartiality in evaluating current events and misses out on many facts and details about them.”

Razek said, “More work is required to examine events, which some believe are still in process. These people think that the three-year regime stability is not enough proof of the end of the rebellion. Cinema producers must learn from productions about the Free Officers Movement dating back to July 23, 1952. Most films about the movement in the 1950s were weak and mostly aimed at preaching, such as 'Back Again' [1958]. The only mature cinema endeavors addressing the July 1952 events were the film adaptations of Naguib Mahfouz’s novels such as 'Miramar' [1969], 'Chased by the Dogs' [1962] and 'Adrift on the Nile' [1971]. Mahfouz wrote these books in the 1960s after he had suffered from writer’s block in 1952, only to return with more accurate documentation of the changes.”

Al-Monitor tried to contact Sami and Hamed, to no avail. However, a source close to Sami told Al-Monitor, “The film does not document the political aspect [of the revolutions]. The film will not show details of meetings between the Brotherhood leaders ahead of the 2012 parliamentary elections or the presidential elections, for instance. It will not even tackle the moments that preceded Morsi’s ouster on June 30 [July 3].”

The source noted, “The film is about the political momentum that prevailed in Egypt, through a humanitarian lens. It will include true and fictional stories, whether happy or sad, that citizens have gone through during the events.”

He added, “The fact that actors are playing the role of real characters such as President Sisi, Tantawi and Morsi is just an additional detail the film producers would use in a limited way as they focus on the impact of the revolutions on the lives of citizens. This does not need years to reveal secret and unknown information as we are still living this situation daily. [The film] has nothing to do with historic documentation about political details and political changes, which have yet to fully unveil.”

Asked about the film release, the source said, “The film is a big production that has technical complexities. We are hoping the film will be screened during the next midterm break [January and February 2018]. I hope people and critics wait before judging the film. It is not a political or historical film, and the team does not intend to play the role of historians. It is merely a human experience to shed light on some social and life aspects that accompanied the revolutions and that many citizens have gone through daily. These people are aware about those aspects and do not need any historic documentation.”

Although it is still too soon to judge “Days of Wrath and Revolution,” there seems to be a unanimous agreement that cinema cannot document the history of Egyptian revolutions just yet.