A new movie about Egypt's tumultuous period after the fall of Mubarak has stirred controversy in the country over accusations that the government has a hand in the film. 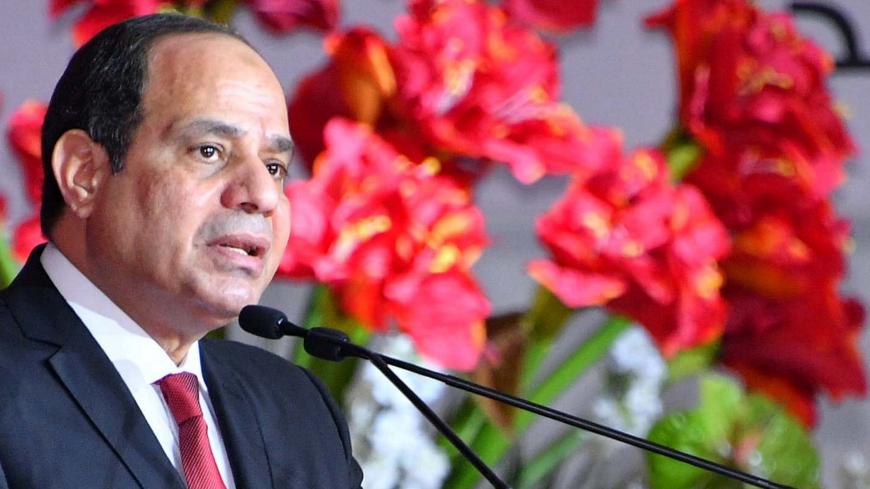 Egyptian President Abdel Fattah al-Sisi speaks during the closing session of the "Tale of a Homeland" conference and announces his intention to run for a second term in Cairo, Egypt, Jan. 19, 2018. - The Egyptian Presidency/Handout via REUTERS

CAIRO — Egyptian artist Ahmed el-Sakka’s new film, in which he plays the role of Egyptian President Abdel Fattah al-Sisi, has triggered widespread uproar on social media. Some are accusing Sakka of hypocrisy and altering the truth of events in favor of Sisi.

Sakka announced Jan. 17 that the filming of "Serry Le Al-Gha'aya" ("Extremely Confidential") — written by screenwriter Waheed Hamed and directed by Mohammed Sami — is almost finished. The story unfolds during a critical period in Egypt's contemporary history, between the revolution of January 25, 2011, and the events of June 30, 2013.

On Jan. 12, Egyptian activists and newspapers published photos from the film set showing several characters. Sakka plays the role of Sisi when he was defense minister, while Ahmed Rizk is deposed President Mohammed Morsi and Abdul Aziz Makhion is Maj. Gen. Mohammed al-Asar.

Leaked photos widely circulated on social media, unleashing a storm of criticism against Sakka among users who described the film as propaganda portraying Sisi as a national hero who saved Egypt.

“You are depicting a personality that smashed the greatest revolution in history, destroyed a generation, sold a country’s land and committed a massacre against its people. … You will not only lose your audience, you will basically lose yourself,” human rights activist Asma Mahfouz told Sakka in a post on Facebook.

Meanwhile, Egyptian actress Rasha Mahdi praised the film. She wrote on Twitter, “For all those behind 'Serry Le Al-Gha'aya,' you make all artists proud. The fact that you jeopardized your security and are facing an unprecedented attack confirms that art is a message.”

Sakka faced a backlash by posting a statement on his official Facebook page on Jan. 16 in which he wrote, “I have had my share of insults and offenses, but I forgive all those who verbally assaulted me. You have rushed to lash out at a decent film that portrays characters fairly and respectfully. I love Egypt and I am not a hypocrite." He also denied being under any kind of pressure to star in this film.

Art critic Tariq al-Shennawi does not buy Sakka’s reply. In a phone interview on El Mehwar TV show "90 Minutes" on Jan. 19, Shennawi said that Sakka seemed confused, scared and unable to express his real opinion. He also pointed to changes in the content of the script written by Hamed, which raises suspicions about the entity supervising the work.

Author Alaa al-Aswani bashed the film on Twitter, writing Jan. 19, “Those who produce any film, play or show in a bid to glorify a ruler, who is still in power, are in fact mere puppets in the hands of the sultan, no matter how they justified their actions. This is a universal constant rule.”

Also on Twitter, Gamal Eid, the executive director of the Arabic Network for Human Rights Information, wrote, “Producing a film about Sisi now would not have any credibility or value, and may be described as hypocrisy. The Sisi regime will only allow a complimentary propaganda film that criticizes its opponents. To be credible, the film ought to be produced after Sisi’s departure and to highlight his failures and successes.”

Al-Monitor contacted one of the lead actors in the film, Abdul Aziz Makhion, who refused to give any comment. He only said, “I received a call from the military intelligence asking me not to give any statements about the film.”

Hamed also told Al-Monitor that he has nothing to say about the film, noting, “It is currently a sensitive issue to talk about this film.”

Film director Sami also refused to talk to Al-Monitor, saying, “I will not talk about the film before its release in film theaters.”

Al-Monitor learned from a source at the film’s technical production department that "Serry Le Al-Gha'aya" was filmed under the sponsorship of the Egyptian Moral Affairs Department and the supervision of the Egyptian armed forces. The source noted on condition of anonymity that some of the scenes were filmed in military barracks and at an Egyptian military airport. “The film was funded by the Moral Affairs Department, but the owner of Albatros Productions and Distribution Company Kamel Abu Ali oversaw the production,” the source said.

Art critic Magda Khairallah has a different opinion. She believes making a biopic about living public figures is normal, and argued that films were made about former US President Barack Obama while he was in power.

However, in a phone conversation with Al-Monitor, Khairallah doubted "Serry Le Al-Gha'aya" would objectively depict the events that took place during that critical period since it is produced under the sponsorship of a state institution.

“Cinema relays events but it cannot falsify history. If the film was a great piece of art then it would be respected, but if it is mere propaganda or a cliche it is doomed to fail,” she said.

On Jan. 20, 2015, during a police ceremony, Sisi had called on Sakka to produce artworks that reassure people and give them hope.