The Egyptian movie world is chock full of films glorifying the country's military and security forces, and security bodies are becoming increasingly involved in the industry. 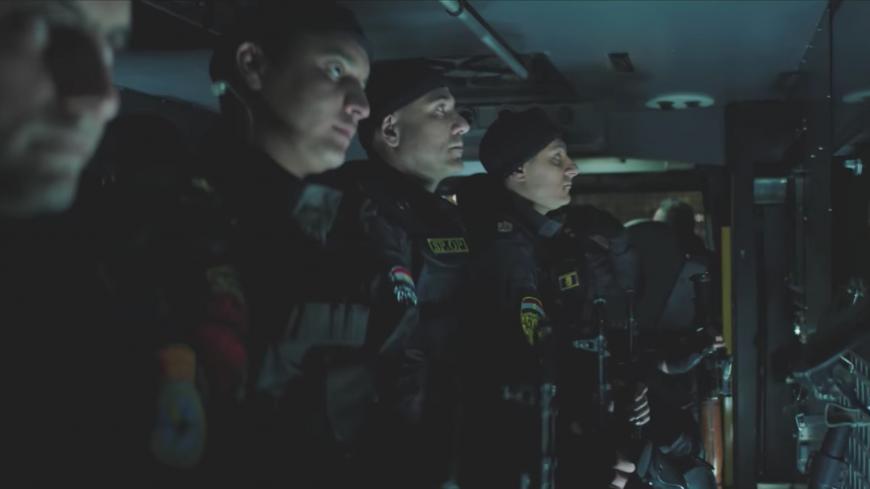 A scene from the Egyptian film "Al-Khaleya." - Raw Entertainment

CAIRO — Egyptian movie theaters have been buzzing with movies promoting the role of military and security forces.

Since Sept. 28, the crew of "Serry Lilghaya" ("Top Secret") has been working hard to finish shooting and get the movie to theaters for the school mid-term vacation at the end of January 2018. The film depicts developments in Egyptian society from Jan. 25, 2011, until June 30, 2013, when former President Mohammed Morsi and the Muslim Brotherhood regime were toppled. The film also focuses on the role of the military in protecting the state and citizens. "Top Secret" casts prominent actors as military leaders, including Egyptian star Ahmed El Sakka as President Abdel Fattah al-Sisi during his time as defense minister.

One of the film's producers is Egyptian businessman Ahmed Abou Hashima, who is close to President Sisi and Egypt's military. In June 2016, Abou Hashima had acquired 50% of a major production company, Egypt for Cinema, which is owned by producer and businessman Kamel Abu Ali.

Another film, "Al-Khaleya" ("The Cell"), tells the story of the murder of a special operations officer from the Interior Ministry in clashes with a terrorist cell and how his colleague pursued his killers.

Talking about his film on the Arabwood TV program Sept. 17, director Tarek El Aryan said that officers from the Interior Ministry's special operations unit appeared as extras, contributing to the great accuracy of the film's action scenes.

Aryan added that the Interior Ministry made significant contributions in securing filming permits in public places and evacuating streets for shooting the action and chase scenes.

Sameh al-Rifai, the son of the 103rd Thunderbolt Battalion's commander, Brig. Gen. Ibrahim al-Rifai, who was killed in the Yom Kippur War in October 1973, spoke to the Masrawy news site on Sept. 18. He revealed that the Department of Moral Affairs and the Egyptian Armed Forces were coordinating with movie producers on a film depicting his father's life, achievements and martyrdom.

Yet production companies' cooperation with military and security institutions isn't limited to films highlighting police and military accomplishments. Taking it a step further, it seems that some former military figures are intent on entering the world of production.

Muhammad Samir, a former spokesman for the armed forces, announced in a press statement on Sept. 13 the establishment of a media production and public relations company called Bright Future.

During the inauguration ceremony for the new Suez Canal in August 2014, Sisi said in a speech, “Gamal Abdel Nasser was lucky, as he had the support of the media.”

Tarek El Shennawi, a professor of art criticism at Cairo University's Higher Institute of Cinema Arts, told Al-Monitor, “Movies highlighting the army's and the police’s achievements under Nasser’s era may have been biased to the regime. This is the case of 'The Second Man' and the movies starring Ismail Yassin. These movies emphasized the achievements of police patrols in maintaining security and fighting drug smugglers, gangs and black market currency dealers. At the time, these crimes were not prevalent in Egyptian society, while the movies that are currently produced about the security forces and the army focus primarily on how these forces are combating terrorism and radical Islamic movements.”

He added, “Many in the artistic community are ready to take part in these movies because they reject radical Islamic movements that decry arts and prohibit artistic production. This is especially true since Egypt has been hit by dozens of terrorist acts, which can be depicted in stories for cinema and television.”

Shennawi noted that some movies produced in Abdel Nasser’s era, such as "Return My Heart" and "God Is on Our Side," tried to politically promote the 1952 Egyptian revolution, but were not very persuasive. But he explained that after the events of 2011 and in light of increased openness due to the communication and social media revolution, Egyptian audiences are more politically informed and are no longer so easily influenced.

He added, “I do not think 'Top Secret' can be classified as political propaganda in favor of the June 30 revolution, President Sisi or the current regime, since it is written by Wahid Hamid, who is a veteran Egyptian author and screenwriter.”

Egyptian film critic Nader Adly told Al-Monitor, “The fact that businessmen close to the armed forces, or former military members, are entering the media production arena is a positive phenomenon. The entry of new producers, regardless of their affiliations, is always a good thing, especially if they are capable of producing blockbuster movies.”

Another Egyptian film critic, Rami Abdel Razek, expects the movies glorifying the achievements of the armed forces and the police to find great success. He said, “These are action movies, and this is the Egyptian audience’s preferred genre. I think they will be hit movies since, just like 'The Cell,' they accurately depict action and chase scenes.”

Abdel Razek told Al-Monitor, “Movies such as 'The Cell' and 'Arrest Letter,' which depict the fight between the police forces and terrorist organizations, are superficial. They portray members of terrorist organizations as mercenaries and wealth-seekers without focusing on the humanitarian, personal, psychological and social reasons they became terrorists.”