After he postponed the Palestinian legislation elections scheduled for May 22, political opponents are considering ways to oust Palestinian President Mahmoud Abbas. 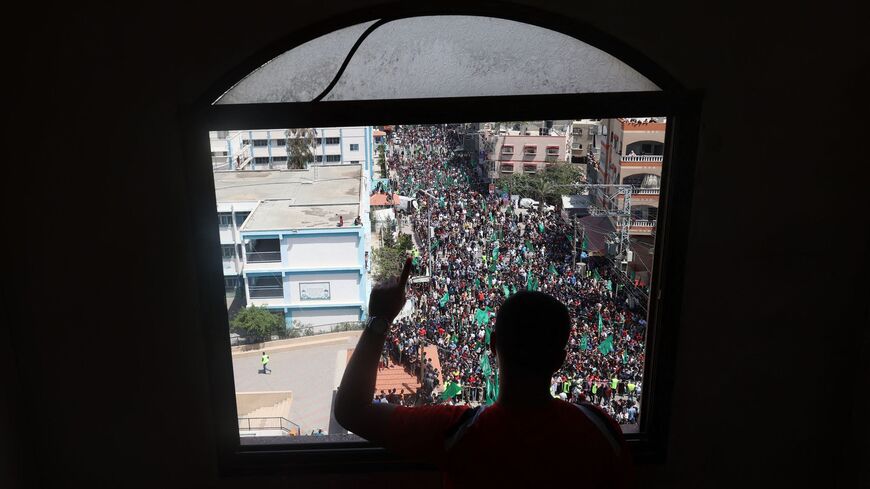 Palestinian Hamas supporters take to the streets in the Jabalia refugee camp in the northern Gaza Strip April 30, 2021, following the postponement of the upcoming Palestinian elections that were supposed to take place next month. - MOHAMMED ABED/AFP via Getty Images

Palestinian President Mahmoud Abbas' April 29 postponement of the legislative elections scheduled for May 22 came as a shock to Palestinians. Several Palestinian factions condemned Abbas for making his unilateral decision without consulting with them.

Al-Monitor's sources say that the Palestinian factions are considering their options to respond to Abbas’ decision. A number of them — including the Hamas movement, Palestinian Islamic Jihad and the two Fatah lists led by imprisoned leader Marwan Barghouti and dismissed Fatah leader Mohammed Dahlan, as well as the independents — had boycotted the Palestinian presidential meeting in Ramallah on April 29 at which Abbas made the announcement.

Speaking to Alghad TV on April 29, Hamas’ parliamentary bloc spokesman Mushir al-Masry said Abbas will face serious consequences for postponing the elections. He called for Abbas' dismissal and revoking all political agreements made with him.

Lebanon’s Al-Akhbar newspaper revealed April 30 that consultations are underway to unite those opposing Abbas’ decision to pressure him.

On May 1, Barghouti's Freedom and Dignity List called on the European Union to suspend financial support for the Palestinian Authority and expressed its intention to appeal to the European Court of Human Rights to that end.

Yahya Moussa, a Hamas leader and chairman of the Human Rights and Oversight Committee at the Palestinian Legislative Council, told Al-Monitor, “It is a historical moment for the Palestinians to dismiss Abbas from the political arena. Fatah is divided and there are parties within the movement in favor of this demand. Hamas could hold a conference for the electoral lists and the factions to form a rescue front. The masses could also fill public squares and march to the presidential headquarters in Ramallah. It is time to consider a strategy to dismiss Abbas and revoke his mandate to lead. Hamas is likely to lead the national project via a consensus with the rest of the Palestinian national movement’s components.”

A barrage of popular anger is adding legitimacy to the calls to oust Abbas. Demonstrations were held in the Gaza Strip and Ramallah, and the Palestinian factions issued condemnation statements on April 30. Hamas called Abbas’ decision tantamount to a coup against national consensus and partnership, and the Palestinian National Initiative called on Abbas to rescind the decision. Islamic Jihad Secretary General Ziyad al-Nakhalah called for an urgent Palestinian meeting to agree on a national program.

Hussam al-Dajani, a political analyst and professor of political science at al-Ummah University in Gaza, told Al-Monitor, “Abbas’ decision is not convincing to the Palestinians. A series of political consultations focusing on the repercussions of Abbas’ impulsive decision have been held in the past few days. … [It] will have consequences.”

He added, “A number of options were discussed. The first is … popular protests. The second is to hold press conferences and the third is to revoke Abbas' power by forming a government in Gaza. The fourth is to form a constituent assembly whose powers would reach the West Bank and Jerusalem. Each of these options has its pros and cons.

A Palestinian official close to Abbas told Al-Monitor on condition of anonymity, “President Abbas was elected by the people and has international legitimacy. He is the representative of the Palestinians in all international forums and these calls will not resonate, neither locally, regionally nor internationally.”

Calls to dismiss Abbas have also come from intellectual circles. Mohsen Saleh, manager of al-Zaytouna Center for Studies and Consultations in Beirut, wrote April 30 that the Palestinian forces have an opportunity to form an expanded national front that would impose the people’s will on Abbas and agree on a transitional leadership.

Palestinian writer Khaled Hroub wrote April 30, “A helpless president does not deserve to lead. He has proven to be led by narrow partisan calculations rather than by the national interest. It is time he leaves the political landscape out of respect for the dignity remaining to us.”

Imad Mohsen, spokesperson for the Democratic Reformist Current headed by Dahlan, told Al-Monitor, “We have always called for the formation of a national rescue front. Today, all electoral lists have the opportunity to decide what would be the next steps after postponing the elections, which led to disappointment and apathy among Palestinians. Although every faction has its own regional allies and friends that they consult with, change in Palestine must be achieved from within.”

It its latest poll published March 23, the Palestinian Center for Policy and Survey Research in Ramallah stated that 22% of all Palestinians want Barghouti as the next PA president, 14% support Hamas leader Ismail Haniyeh and only 9% chose Abbas.

According to another poll by Atlas Palestine on April 28, 27% of Gazans want Haniyeh as president, 22% want Barghouti and 15% support Dahlan, while only 11% want Abbas.

Atef Adwan, former minister of refugee affairs in Gaza, told Al-Monitor, “The calls to dismiss Abbas came too late, because he has pursued a dictatorial policy. The rescue front’s mission needs to be to get rid of him. It is important to take advantage of the national consensus that opposes the delay of the elections, though the regional countries will reject this approach because their interests converge with Abbas.”