After he remained on the sidelines of the latest round of escalation between Israel and Palestinian factions in Gaza, Palestinian President Mahmoud Abbas' call for a national unity government is being largely ignored. 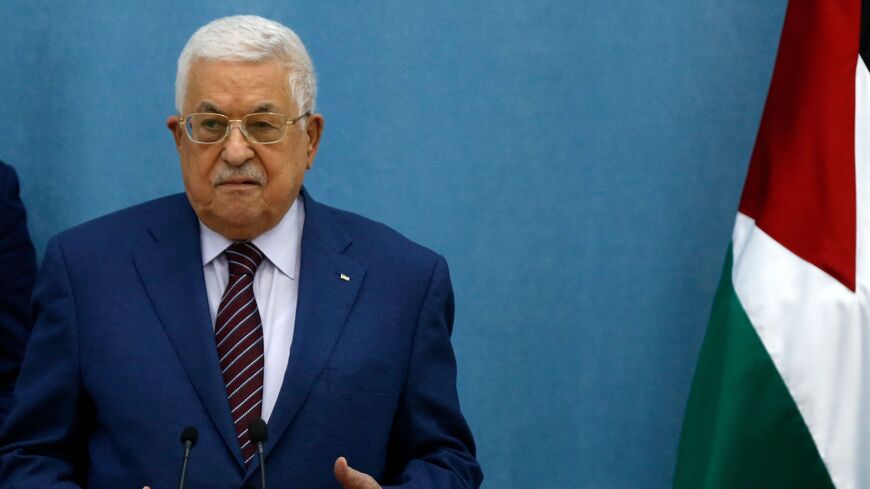 Palestinian President Mahmoud Abbas prays before an emergency meeting of the Fatah Central Committee and the PLO Executive Committee in the occupied West Bank City of Ramallah, on May 12, 2021. - ABBAS MOMANI/AFP via Getty Images

The Palestinian Authority has not taken any serious and practical stances to stop the violence or show real solidarity with Gaza since Israeli airstrikes began to hit the Strip May 10 and up until a cease-fire was reached at dawn May 21 between Hamas and Israel.

The PA has only released statements of condemnation for the Israeli attacks on Palestinians in Gaza and made phone calls with several political parties. President Mahmoud Abbas did not call any Hamas leaders.

On May 19, Abbas announced in a recorded speech before an emergency meeting of the Arab Parliament held in Cairo, “We are ready to form an internationally accepted national unity government committed to international legitimacy.” In the same speech, he said that his efforts to hold the general elections are ongoing and that they will proceed once they can be held in Jerusalem.

Bassem Naim, Gaza's former health minister who now works in Hamas' international relations office, told Al-Monitor, “Abbas’ call to form a national unity government that is totally outside the political context is not serious." He "is selling himself and his people illusions," Naim said, explaining that many things need to happen before a government can be formed "such as lifting the sanctions on Gaza, sending aid to the grieving Strip and keeping the hands of his security forces off every Palestinian who shows solidarity with Gaza in the West Bank.”

Abbas did not provide further details about the nature of the government he called for while Gaza was under intense bombardment and all Palestinian factions, notably but not just Hamas, had their hands full with the fighting.

Abbas’ talk about a unity government triggered harsh criticism from Palestinian activists on social media. They expressed their surprise that he would make such a move while the war on Gaza rages and the West Bank and Arab cities in Israel and Jerusalem are in the midst of a popular uprising.

Hussam al-Dujni, a professor of political science at Umma University in Gaza, told Al-Monitor, “Abbas’ proposal to form a government instead of holding the elections stems from fear of their outcome, with the prevalent public mood supporting the resistance. I do not think this call will be well received by the key players, especially Hamas, because there has been no reform of the political system, notably in the Palestine Liberation Organization, to break Fatah’s hegemony over it. Only then can we talk about forming a government.”

Iyad al-Qarra, the former editor of the Gaza-based Felesteen newspaper close to Hamas, told Al-Monitor, “Abbas’ call for a national unity government is rushing to justify himself after his inaction during the Gaza war. Meanwhile, Hamas proved to be a key player in the Palestinian arena. Nobody consulted Abbas for the cease-fire deliberations. Following its military performance in the Gaza war, Hamas is now seeking to unite Palestinians and is behaving as a leader in the political scene rather than just a party or movement.”

In the aftermath of the Gaza battles, Hamas wants to lead the Palestinian forces on a new political track that does not accept Abbas’ monopolization of political decisions. After he postponed the elections and did nothing in the Gaza conflict, he's lost his popular mandate.

Salah Abdel Atty, head of the International Commission to Support Palestinian Rights, told Al-Monitor, “Abbas’ call is a formality and has no practical implementation. It is just an attempt to deflate the wide-scale Palestinian tension and resentment over his adjournment of the elections. Perhaps his condition for the government to be internationally accepted implies an approval of the Quartet on the Middle East conditions, which Hamas won’t accept.”

Wissam Afifa, head of the Hamas-affiliated Al-Aqsa media network, told Al-Monitor, “The timing of Abbas’ call to form a national unity government is provocative; it is an attempt to make up for his absence from the Gaza war. The PA was among the worst affected as it boosted Palestinians' support for Hamas, which alone defended Jerusalem and Al-Aqsa Mosque.”

He added, “After the war on Gaza, Hamas is no longer waiting for Abbas’ call to form a government. The movement has entered the political arena through the door of armed confrontation. … Hamas sees itself as the only player in the Palestinian arena and does not feel it has to respond to Abbas’ call for forming a government.”