German, Czech and Slovak foreign ministers arrive in Israel in show of solidarity 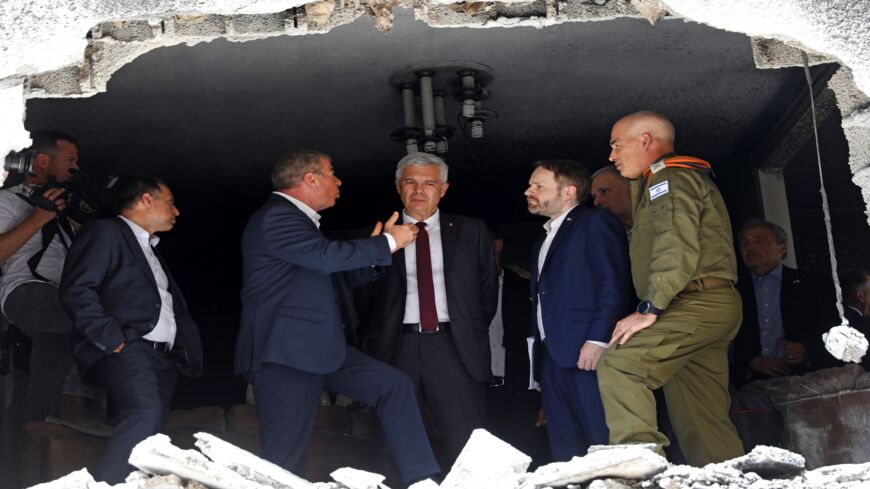 Slovak Foreign Minister Ivan Korcok (C) and his counterpart from the Czech Republic, Jakub Kulhanek (2nd R), listen to remarks by their Israeli counterpart, Gabi Ashkenazi (L), during their visit to a building that was hit by a rocket fired by Palestinian militants from the Gaza Strip, in the Israeli city of Petah Tikvah on May 20, 2021. - GIL COHEN-MAGEN/AFP via Getty Images

Prime Minister Benjamin Netanyahu met this afternoon with German Foreign Minister Heiko Maas in Israel for a one-day solidarity visit. The meeting took place at the Defense Ministry headquarters in Tel Aviv. During the meeting, Netanyahu showed Maas a piece of a drone shot down earlier this week near the border with Jordan. “While we were busy fighting, a few days ago, Iran sent an armed drone into Israel from Iraq or Syria. Iranian forces launched an armed drone, which our forces shot down at the border between Israel and Jordan. I think that says everything about the real patron of terror in the Middle East and the world — Iran,” said Netanyahu.

Maas arrived in Israel this morning and was greeted at the airport by Foreign Minister Gabi Ashkenazi. Upon arrival, Maas tweeted, “As long as there are states and groups that threaten Israel with annihilation, it must be able to protect its citizens. Germany will continue to make contributions to ensure this. Our solidarity is not confined to words alone.” Maas also said Germany upholds “without ifs and buts our friendship with Israel, which has to defend itself against the rocket terror of Hamas."

Ashkenazi responded by saying, “I am grateful for Germany’s support since the beginning of the war, and for condemning Hamas’ terrorist activities.”

Ashkenazi brought Maas to visit the site of a building in the central town of Petah Tikvah, which was heavily struck by Hamas rockets. A senior Israel Defense Forces officer briefed Maas on the site, explaining the rocket threat Israel has faced in recent days.

After the meeting with Ashkenazi, Maas said “human suffering is increasing on both sides,” adding he was convinced it was in the interest of both sides that the violence should end soon.

Kulhanek said his visit to Israel was “first and foremost a demonstration of the Czech Republic’s unwavering support for Israel in these difficult times. Israel has every right to defend its citizens against indiscriminate terror.” Korcok said after his meeting with Ashkenazi, “Slovakia recognizes that Israel has no choice but to protect itself against attacks of Hamas. I too pleaded for restraint to avoid further civilian casualties.”

The three European ministers arrived in Israel at Ashkenazi’s invitation, following a visit to Israel and the Palestinian Authority earlier this week by Greek Foreign Minister Nikos Dendias. Dendias was the first European minister to arrive in Israel since the beginning of the escalation some 10 days ago. After his visit to Israel, Dendias traveled to Egypt, where he again raised the issue of the current Gaza escalation and efforts to achieve a cease-fire. According to Israel’s Foreign Ministry, more foreign ministers might arrive in Israel in the coming days to express their solidarity against Hamas' rocket campaign.

Several countries, including the United States, Egypt and France, have been involved in recent days in efforts to reach a cease-fire between Israel and Hamas. Contrary to Washington, Paris is also pushing for a UN Security Council resolution calling for a cease-fire — an initiative Israel apparently opposes. The United States hinted yesterday it intended to veto such a resolution if and when it was brought up.

That being said, reports in recent hours claim Netanyahu might opt for a one-sided cease-fire based on the principle that quiet on Hamas’ side would be responded to with quiet by Israel. The reports said Netanyahu will bring this proposal up for the approval of the Security Cabinet this evening.