A number of progressive Democrats have called for the United States to reexamine Israel's annual aid package. 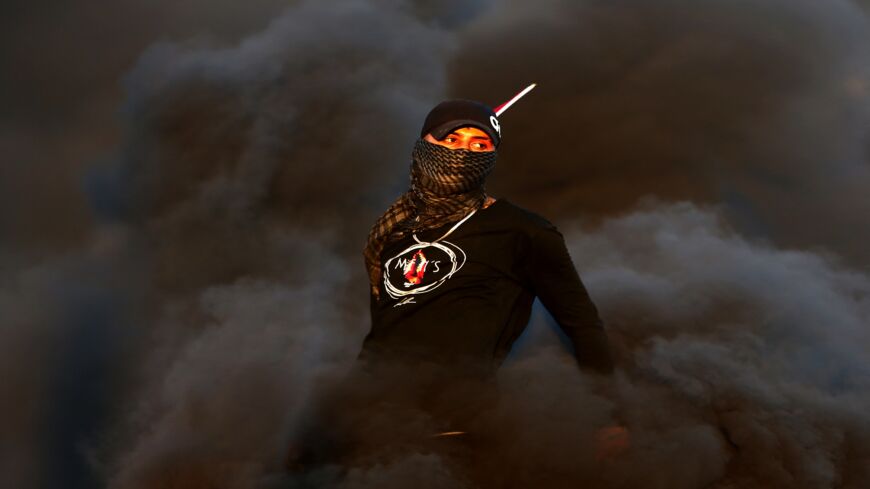 A Palestinian demonstrator stands amidst smoke from burning tires during a protest against the tension in Jerusalem and the Israeli-Gaza fighting, on May 17, 2021, in the occupied West Bank, near the settlement of Beit El next to Ramallah. - ABBAS MOMANI/AFP via Getty Images

The mounting death toll from Israel's campaign of airstrikes against militants in Gaza has thrust US military assistance to the Jewish state into the spotlight, as a small but vocal group of Democrats call for conditions to be placed on the several billions of dollars the United States provides Israel with each year.

“American taxpayer money is being used to commit human rights violations,” tweeted Rep. Rashida Tlaib (D-Mich.). “Congress must condition the aid we send to Israel and end it altogether if those conditions are not followed.”

"We cannot remain silent when our government sends $3.8 billion of military aid to Israel that is used to demolish Palestinian homes, imprison Palestinian children and displace Palestinian families,” Rep. Ayanna Pressley (D-Mass.) said on the House floor. “A budget is a reflection of our values."

The United States provides some $3.8 billion to Israel annually, the bulk of which consists of foreign military financing. The sum, which accounts for 20% of the country’s defense budget, makes Israel the No. 1 recipient of US foreign aid, followed by its neighbors Egypt and Jordan. In the final months of the Obama administration, the United States and Israel inked an agreement to provide Israel with $38 billion in military assistance over 10 years, in what was the biggest such aid package in history.

The annual US aid to Israel has long been seen as untouchable, but calls to condition its delivery on human rights reforms have gained traction as a wave of progressive Democrats swept into office in 2018. Last month, Rep. Betty McCollum (D-Minn.) introduced legislation that seeks to ensure taxpayer dollars aren’t used by Israel to detain Palestinian children, unlawfully seize or destroy property, forcibly transfer civilians in the West Bank or further annex Palestinian territory.

The bill, which has 19 co-sponsors and the endorsement of liberal Jewish advocacy group J Street, doesn't stand a chance in the current Congress. More than 330 House members signed a letter in response, describing aid to Israel as “a specific investment in the peace and prosperity of the entire Middle East.”

President Joe Biden takes a more traditional view of the decades-old Palestinian-Israeli conflict. During the presidential campaign, he described calls to leverage aid to Israel as “bizarre” and “irresponsible.”

“Look, I have been on record from very early on opposed to the settlements, and I think it’s a mistake, and President Netanyahu knows my position. But the idea that we would draw military assistance from Israel on the condition that they change a specific policy I find to be absolutely outrageous,” he told reporters in 2019.

On Monday, Israel continued pummeling buildings in the Gaza Strip in an air offensive triggered last week by Palestinian militant group Hamas launching volleys of rockets across the border. Human rights groups and a growing number of Democrats have called on Biden to publicly condemn what they view as a disproportionate use of force from Israel that's left nearly 200 Palestinians dead.

“We can no longer be apologists for the right-wing Netanyahu government and its undemocratic and racist behavior,” Vermont Senator Bernie Sanders, chair of the Senate Budget Committee, wrote in a New York Times op-ed on Friday. “The provision of US military aid must not enable human rights abuses.”

In a move likely to rile the party’s progressive flank, The Washington Post reported on Monday that the Biden administration had approved the sale of $735 million worth of precision-guided weapons to Israel. Congress was formally notified on May 5, prior to the latest flare-up in Gaza.

In a statement on Monday, Rep. Ilhan Omar (D-Minn.) described the proposed sale of Joint Direct Attack Munitions to Israel as “appalling.”

“If this goes through, this will be seen as a green light for continued escalation and will undercut any attempts at brokering a cease-fire.”

The Biden administration has repeatedly called for de-escalation but has stopped short of urging a cease-fire between Israel and Hamas. White House press secretary Jen Psaki defended the United States' “quiet, intensive diplomacy” when asked why Biden hasn’t publicly demanded a truce.

As the fighting entered its second week, a group of 29 Democratic senators issued a joint statement calling for “an immediate cease-fire” to end the region’s heaviest fighting since the 2014 war.