Sen. Bernie Sanders, I-Vt., is calling for broad conditions on US military aid to Israel as many of his opponents come out in favor of more limited restrictions. 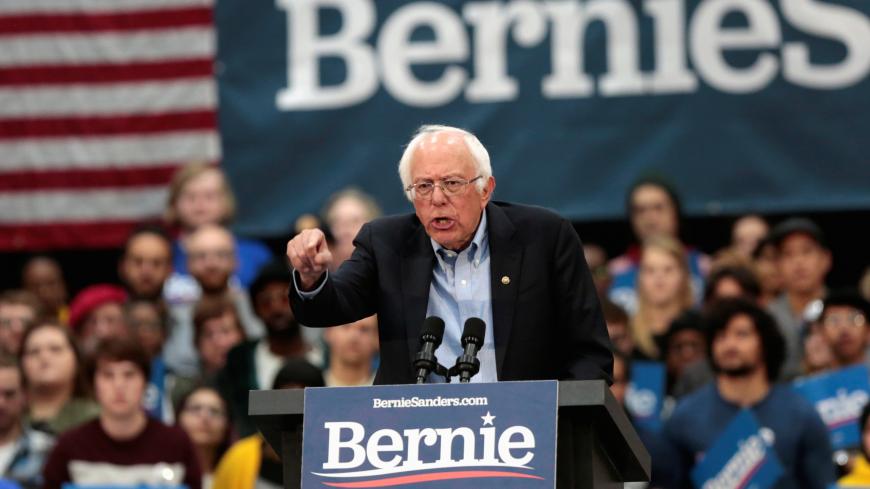 J Street and at least three Democratic candidates have set a formal Israeli annexation of certain West Bank settlements as their red line for conditioning the annual military aid package. Sanders, however, issued a broader call to condition the aid on human rights and living conditions in the Gaza Strip — a line that received booming applause from the conference’s rank and file attendees.

“If you want military aid, you’re going to have to fundamentally change our relationship with the people of Gaza,” Sanders said at the conference today. “In fact, I think it is fair to say that some of that $3.8 billion should go right now to humanitarian aid in Gaza.”

Although J Street is broadly supportive of Israeli military aid, Netanyahu’s vow to annex certain West Bank settlements has prompted the advocacy group to pressure other candidates to use it as leverage in the hopes of preempting any formal annexation. J Street President Jeremy Ben-Ami first floated conditioning the aid on West Bank annexation during an April interview in the Forward.

“Our question that we’re putting on the table is, as Israel receives that $3.8 billion, what is it being used for?” Ben-Ami told Al-Monitor. “The question of how aid is used once received is where we think the question should be, not condition the receipt of aid on the front end, because Israel does have very legitimate security needs and it faces real threats.”

Mayor Pete Buttigieg was the first to follow J Street’s line in June when he vowed that US taxpayers would not “foot the bill” for any West Bank annexation — reiterating that pledge at today’s conference. Pressed by the moderators — former Barack Obama White House officials Ben Rhodes and Tommy Vietor — the former Secretary of Housing and Urban Affairs, Julian Castro, made a similar pledge.

Sen. Elizabeth Warren, D-Mass., who is competing with Sanders for the party’s progressive base, did not attend today’s conference, but echoed the same line while addressing J Street via video.

“If Israel’s government takes steps to formally annex the West Bank, the US should make clear that none of our aid should be used to support annexation,” said Warren.

The current front-runner, Vice President Joe Biden, also addressed the conference via video, but he did not discuss military aid. Sens. Amy Klobuchar, D-Minn., and Michael Bennet, D-Colo., were the only two candidates to address the conference in person who declined to jump on board with J Street’s proposed aid conditions.

Presidential campaign pledges aside, appropriators with the power of the purse in Congress may have different ideas. An overwhelming bipartisan, bicameral majority has historically favored a robust military aid budget for the close US ally, even as Israel continued to expand settlements.

And the AIPAC-backed military aid bill, which sailed through the House by voice vote in July, could further tie the hands of a future president who wishes to use the military aid as leverage. The bill, introduced by Rep. Ted Deutch, D-Fla., would also waive parts of the Arms Export Control Act if “Israel is under an existing or imminent threat of military attack.” The legislation does not define what qualifies as an “existing or imminent threat.”

Still, a future president could potentially make use of the Arms Export Control Act and other existing laws that govern how countries use US military assistance. Ben-Ami argued that these laws “should apply to Israel as it applies to all other nations.”

One option would be a set of laws authored by Sanders’ fellow Democratic senator from Vermont, Patrick Leahy.

Leahy currently serves as the top Democrat on the Senate foreign aid spending panel that oversees the bulk of Israeli military aid. Still, he faced considerable heat in 2016 after leading 10 House lawmakers in a letter asking the State Department to investigate Israel and Egypt for alleged extrajudicial killings. The investigation could have triggered aid restrictions on Israel under the Leahy Laws, which share his namesake.

Rep. Betty McCollum, D-Minn., has also introduced legislation that would limit some military aid to Israel under the Leahy law for violence against child prisoners. But House Democratic leaders do not currently have any plans to advance her bill.

Neither Sanders, Buttigieg, Castro, nor Warren have laid out a detailed plan to condition Israeli military aid. But advocates argue that Sanders’ increasingly leftward posture on the issue could eventually shift the debate, similar to what the progressive firebrand has done on domestic US issues with his demand for a single-payer health care system.

“He understands that in order to get these things done, we have to build the kind of political movement that will change Congress, and elect people with the wherewithal to act on these issues,” James Zogby, the president of the Arab American Institute who represented Sanders in a 2016 Democratic National Convention debate over the party’s Israel platform, told Al-Monitor. “A Sanders presidency with the same old Congress isn’t going to go anywhere at all, but raising the issues, building a movement and challenging members of Congress — then the chips will fall.”