Despite support from the Gaza Municipality, a new program allowing young women to practice cycling has sparked controversy in conservative Gaza. 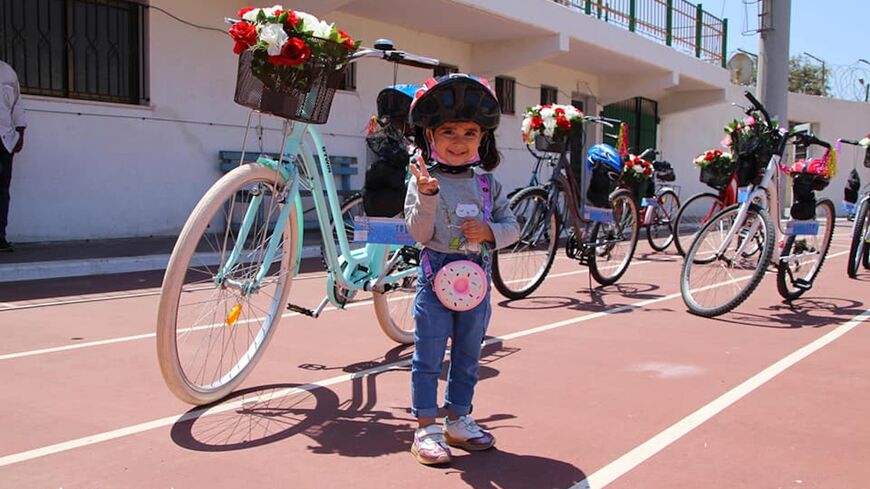 A girl poses with bicycles on the opening day of Gaza's "Deep Breath" program that offers a space for women to ride bikes on April 27, 2021, in Gaza City. - Nelly Ismael Elmasry

In a rare occurrence in the conservative society of the Gaza Strip, 29-year-old Palestinian Rania al-Daour launched a project she called “Breathe Deeply,” creating a space for young women in Gaza to ride bicycles. The project, which is sponsored by the Gaza Municipality, caused an uproar in the Gazan community, which views cycling as a shameful activity for young women.

On the project's opening day, April 27, in Yarmouk Stadium in the center of Gaza City, Gaza Mayor Yahya al-Sarraj said that the municipality encourages young women to practice cycling.

The project will allow young women to practice cycling inside the Yarmouk Stadium five mornings a week. The venue will be reserved for only for them during this time.

“Cycling has been my dream since my early childhood but just like many other girls, we were denied this dream because of society, which takes a dim view of women riding bicycles,” Daour told Al-Monitor.

Daour, who holds a bachelor’s degree in education, found herself after graduation, like most of her peers, without work amid the high unemployment in the coastal enclave. She created project with a grant from the American charity Catholic Relief Services, which provided the bicycles along with protective gear. The body is an international humanitarian agency that provides support for social initiatives via branches all over the world.

Daour said that her project targets young women aged 12 and up. Although she stressed it was a nonprofit project, she set a token fee of five shekels ($1.5) per hour of cycling, or 50 shekels ($15) for a monthly pass. More than 30 young women have been regularly practicing cycling at the stadium.

Many women expressed their dissatisfaction with the hours.

“The 8 a.m.-12 p.m. schedule does not really work for many women, who are usually at work or taking care of house chores,” 28-year-old participant Ruba Mohsen told Al-Monitor.

Another, 31-year-old housewife Myriam Sukkar, agreed that the schedule does not meet the cyclists' needs.

“The morning hours allocated for women to practice cycling at the stadium are really bad. Men don’t have their sports activities, such as football, during these times, as they are at work, not to mention that it's really hot to work out and do physical activities then,” Sukkar told Al-Monitor. “If the morning/noon sports timetable does not work for men, why should it work for women?”

While the project was welcomed by many community members, others found it to conflict with Palestinian traditions.

In an April 25 post, a Facebook group called the Shams women’s platform welcomed the project but but questioned its contributions to women's rights.

“What next? Are we looking for freedom in cages decorated in pink? Isn’t the bicycle a legitimate means of transportation? Will we be able one day to ride freely to our universities and workplaces? Will we be free to hold cycling competitions anytime we like? Or will it require annual funded events in empty streets and areas?” the post read.

The group called for “radical reform and the normalization of women’s presence in the streets, whether as drivers, athletes, street vendors or whatever they want to be. The street is not exclusive for men.”

Gazan Facebook user Mohammed Abu Roumieh described the initiative in a May 1 post as a “debauchery project.”

Fadwa Abu Nada, a 27-year-old Gaza resident, told Al-Monitor, “Women have the right to ride bicycles anywhere at any time,” and not be confined to a certain place within a certain schedule.

In an April 23 Facebook post, Gazan commenter Alia Abu Maryam criticized the project’s promotional flyer showing a man riding a bicycle, saying, “We all felt positively about the idea of the Breathe Deeply project and its role in upholding our right to cycle. It was a nice idea, but the flyer killed it and the positivity I felt.”

The project generally forbids journalists from photographing participants cycling to avoid feeding the controversy, but several photos snapped on the opening day have fueled the criticism.

“We were doing just fine without the photography. We are not breathing at all now, we are being stifled!” Facebook user Walaa al-Jabary wrote May 1.

Fida al-Madhoun, a member of the Gaza Municipal Council who attended the opening day, told Al-Monitor, “We believe that women have the right to practice cycling in certain spaces reserved for this activity.”

She added, “Criticism will not hinder the project or stop other initiatives that give women more freedom in society.”