Jerusalem has succeeded in uniting Palestinians — whether citizens of Israel or in the diaspora — and has caused the exposure of Israeli racism towards 20% of its population who are not Jews. 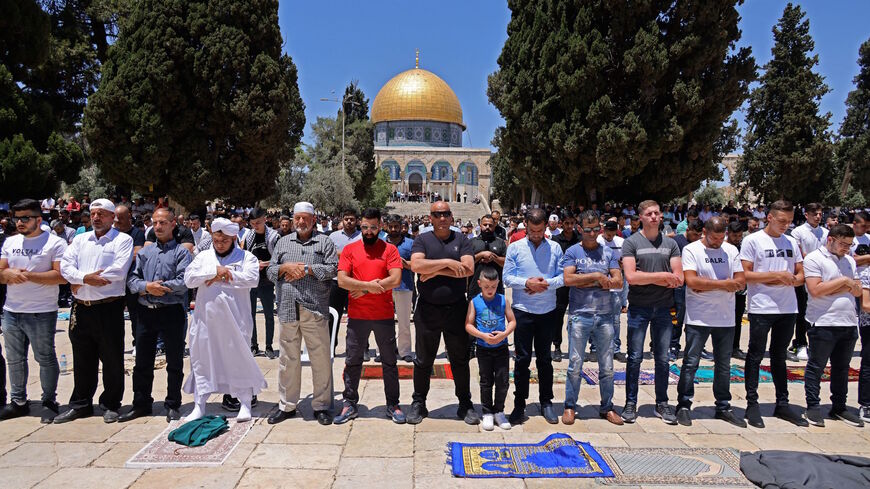 When late Israeli opposition leader Ariel Sharon's provocative visit to the Al Aqsa Mosque compound in September 2000 produced protests that were put down harshly by Israeli security forces, Palestinian citizens in Israel rose up to protest. Thirteen Palestinians in Israel were brutally killed by Israeli soldiers trying — unsuccessfully — to quash what has become known as the Aqsa Intifada.

That scenario appears to have been repeated again with Jerusalem and Al Aqsa, yet Palestinians outside the holy city are showing even greater energy and commitment to supporting their fellow Palestinians in Jerusalem. But unlike the situation in 2000, the vast majority of opposition to these Palestinians has come from an unwieldy mob of Jewish extremists, with the Israeli police largely looking the other way or making symbolic intervention.

With the newly elected extreme-right Knesset member Itamar Ben Gvir leading the mobs, an unprecedented internal struggle has spread like wildfire throughout Israel — particularly in mixed Arab and Jewish towns in Israel. The biggest problems have occurred in Lydda and the southern Tel Aviv area of Beit Yam. But reports about attacks in Haifa have emerged, and clashes with Israeli police have also taken place in many locations.

Speaking on Palestine TV, Fatah Central Committee Secretary Jibril Rajoub said that the attacks against Palestinian citizens of Israel are a reflection of the growing racism in Israel which was legislated through the "nation-state law." The latter, adopted by the Knesset in 2018, says the right to self-determination is limited exclusively to Jewish Israelis.

Ali Jarbawi, a professor of political science at Birzeit University in the West Bank, told Al-Monitor that Israel has always spent time and energy dividing and splitting Palestinians from one another. “But what is happening now is the geographical element has been bypassed, as Palestinians from the 1948 areas [who have Israeli citizenship] are reasserting their 'Palestinian-ism' despite what Israel is committing against them.” Jarbawi believes that the current situation is perhaps the most existential threat for Israel and the Zionist plan.

Emad Hajjaj, a Jordanian cartoonist of Palestinian origin, summarized the situation in a telling political cartoon that combines the Jordanian and Palestinian flags with the embrace by hands coming from Jordan, with the edge of one hand creating the shape of the Gaza strip. But what makes the cartoon more telling is that Hajjaj, who was born in the Amari refugee camp in Ramallah in 1967, has consciously removed any visual reference to the West Bank, reflecting the newly formed unity through shared blood by all Palestinians.

Adan Abu Odeh, an advisor to both the late King Hussein and King Abdullah II of Jordan, told Al-Monitor that the most important development today is the revelation that between the sea and the river, there is an obvious crime of apartheid between Israel and Palestinians. “This is perhaps the most important development in which the crime of apartheid has been revealed in a way that makes it clear we are dealing with one entity — Israel — that is discriminating against Palestinians, whether in Israel or in the occupied territories.”

The unity that has been covered in blood was further developed by the decision of Israeli security forces to use live fire in their attempts to break up one of the protests in the village of Kufr Kana and in Lydda, which signifies a deterioration in the ability of the Israeli police to control the crowds of protestors using traditional non-lethal means. This act will certainly backfire and appears to have produced an angrier response from the Palestinians in those communities.

Israeli Prime Minister Benjamin Netanyahu, who is still facing criminal charges and was unable to form a government in the first round of coalition talks, has ordered an increase in the presence of Israeli security in Arab towns and villages. It is possible that, after having seen the right-wing kingmaker Naftali Bennett rejected in forming a government with centrist Lapid, Netanyahu is perhaps trying to reassure potential candidates in his government such as Ra'am party leader Mansour Abbas to keep the option of forming a government with him open. But Abbas has already stated that he is suspending talks with either side as an act of protest to the indiscriminate and excessive use of force by the Israeli army against Palestinians in Gaza.

Perhaps the most pointed location where the attack on Palestinians was a surprise has been the city of Haifa. This coastal city has been repeatedly touted by Israel as a symbol of Arab-Jewish tolerance and mutual respect. While it is not clear whether the attacks against Palestinian citizens in Haifa were from outsiders or from locals, the fact is that local Jews and the police did little to protect Palestinians.

The absence of protection from radical Jewish mobs has led a number of activists and organizations to call on the international community to provide them with some form of global protection until the dangers to the country’s 20% of the population is dealt with.

Palestinian citizens in Israel have called for a very large demonstration in Sakhnin on May 16.

The events of the last few days appear to have caused a sea change in attitudes in Israel. There is a sharp contrast between years of Jewish incitement — such as chants of "death to Arabs," which has been repeated in Jerusalem lately, without any Israeli official making comments or denouncing it — and how Israelis and their apologists around the world demand Palestinian leaders denounce any action by Palestinians.