Can annexation save Israel from charges of apartheid on West Bank?

Israeli Education Minister Naftali Bennett is promoting the idea that the annexation of Area C on the West Bank will negate claims of Israel pursuing apartheid-like policies in the occupied territories. 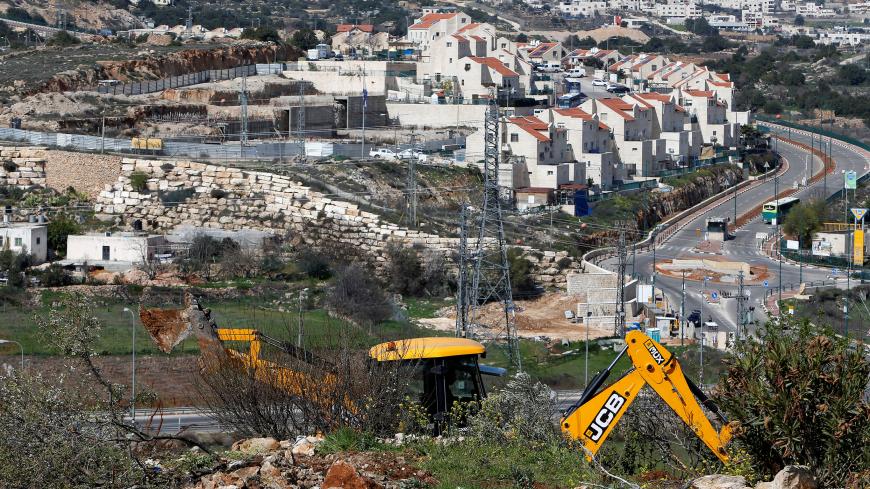 An Israeli machinery removes trees near a Jewish settlement in Hebron, in the occupied West Bank, Feb. 21, 2018. - REUTERS/Mussa Qawasma

Education Minister Naftali Bennett, leader of the right-wing HaBayit HaYehudi, continues to advance a proposal for the annexation of parts of the West Bank. Bennett, it seems, is not pinning his hopes on the current president of the United States or any other conservative figure to fulfill his pro-settler vision. He is not betting that Sheldon Adelson, the right-wing Jewish American gambling tycoon, will suggest to his good friend Donald Trump that he forget about the “ultimate deal” he promised to make between Israelis and Palestinians.

Bennett is also not counting on the claim that God gave the Jews the Land of Israel, stretching from the Mediterranean to the Jordan River. In addition, unlike his settler friends who adopted at face value that “our future lies not in what the Gentiles will say, but in what the Jews will do” — a famous saying by Israel’s first prime minister, David Ben-Gurion — Bennett takes seriously both the Gentiles and homegrown Israeli left-wingers. In fact, Bennett is taking what he estimates to be a pragmatic approach.

The HaBayit HaYehudi leader has been fully aware of claims over the years by Palestinians, human rights groups, Israeli left-wingers and the international community about Israel’s apartheid-like policy vis-à-vis the Palestinians under Israeli occupation and military rule. Bennett wants to sideline such criticism while also promoting the settlement enterprise. In order to do that, he argues, “pulling the rug out from under the claim” that Israel practices apartheid requires a blueprint allowing Israel to deepen its settlement in the territories while at the same time ensuring equal rights for the Palestinians living there. In addition, the plan must avoid a demographic shift detrimental to the Jews.

Obviously, these goals cannot be achieved across the entire West Bank, where 2.5 million Palestinians live. Israel annexing all of the West Bank would create a bi-national state in which Jews would not be the majority. To get around this, Bennett has turned to the Oslo Accords, much reviled by the right-wing settler camp, and has decided that he can “make do” with annexing Area C, over which Israel has full civil and security control.

Area C constitutes some 60% of the West Bank. Bennett proposes turning the Interim Agreement (Oslo II), which gave Israel full control over this territory, into a permanent situation. The annexation would make the Israeli settlements an organic part of the State of Israel, like Tel Aviv and Haifa are. The legal status of the 413,000 Jewish residents there would be identical to that of their brothers and sisters in Israel, which enjoys full international recognition.

Annexationists are aware of the tens of thousands of Palestinians in the dozens of villages the length and breadth of Area C who refuse to vacate their lands to make way for the settlers. To downplay this problem, Bennett has shrunk their number to 50,000, whereas data compiled by the United Nations and human rights organizations has their number at four times that or more. Imagine for a moment, however, that Bennett is correct, and no more than a few tens of thousands of Palestinians live in the coveted territory. Would annexing the area and turning them into “full-fledged Israeli citizens,” as he has said, “pull the rug out from under” the apartheid claim?

While South African apartheid was based on racial segregation, the charge of apartheid to which Bennett refers is based on nationalism. When South Africa revoked its apartheid system in 1994, people of all races were granted equal political rights. Israel’s record on the rights of the people it annexes is hardly encouraging, to put it mildly.

Since Israel's unilateral annexation of East Jerusalem in 1967, the city’s Palestinian residents have had the status of permanent residents, similar to that of foreigners who move to Israel. The status of Palestinian residents of Jerusalem’s annexed Sheikh Jarrah neighborhood is different from that of their neighbors across the street in the Jewish settlement of Ma’alot Dafna. The Palestinians are entitled to vote in municipal elections, but not in general elections for the Knesset, and they cannot obtain an Israeli passport. The Israeli Ministry of Interior rejects the majority of citizenship applications by Jerusalem’s Palestinian residents. For instance, in 2016, only 223 of 1,081 applications were approved.

Israel’s annexation of East Jerusalem is far from being an exemplary model of equal rights in other ways as well. According to the National Insurance Institute, 76% of East Jerusalem Palestinians and 83.4% of their children live below the poverty line, compared with 21.7% and 30%, respectively, of all Israeli residents and their children. An August 2017 report by Ir Amim, a nongovernmental organization dedicated to equality in Jerusalem, indicates that 14.6% (18,600) of school-age Palestinians in East Jerusalem are not registered at a school known to authorities. The shortage of classrooms has reached a staggering 2,500.

Jerusalem planning authorities have not promoted a single zoning plan for the city’s Palestinian residents for more than a decade. Meanwhile, local neighborhood zoning plans initiated by the municipality are stuck in a bureaucratic netherworld. On the other hand, authorities display great diligence in razing illegally built Palestinian homes in East Jerusalem. Israelis, it appears, have no problem with any of this. The results of a survey dubbed the “aversion poll,” announced Dec. 10 on Channel 10, indicate that Israeli Jews feel just fine in a culture of apartheid. For example, 41% believe Jews should enjoy more rights than Arabs.

The annexation of Area C would grant a legal imprimatur to the de facto policy of prioritizing Jewish construction by virtue of the newly adopted Nationality Law, which encourages Jewish settlement. One cannot pull the rug out from under the claim that Israel practices apartheid in the West Bank without granting equal political rights to all people living under Israeli control, not to mention those within Israel's borders.

This last distinction was not made by an Arab member of the Knesset. Rather, it is from a February 2017 speech by Israel’s premier citizen, President Reuven Rivlin, at the annual conference of the right-wing Besheva media group. While expressing support for the annexation of West Bank territories, the president stressed, “Sovereignty over a certain territory grants citizenship to all who reside there.… There cannot be one law for Israelis and another one for non-Israelis.” Nonetheless, even Rivlin’s views are tinged with arrogance toward another people. The very idea of imposing annexation on millions without recognizing their right to self-determination in their homeland exudes the stench of nationalism.

This past Nov. 15 marked the 30th anniversary of the Algiers Declaration, the Palestinian independence manifesto that recognized Israel within its 1967 borders and paved the way for the Oslo Accords. As long as Israel continues to make unilateral decisions over the heads of the Palestinian people, without their consent, full civil equality cannot be achieved. Any attempt by the stronger side to force an agreement on the other will not ease the conflict or absolve Israel’s rulers of the shameful stigma of apartheid.