Palestinian politicians continue to pressure East Jerusalem residents to boycott the municipal elections, but voting data demonstrates an opportunity to swing political influence in the city. 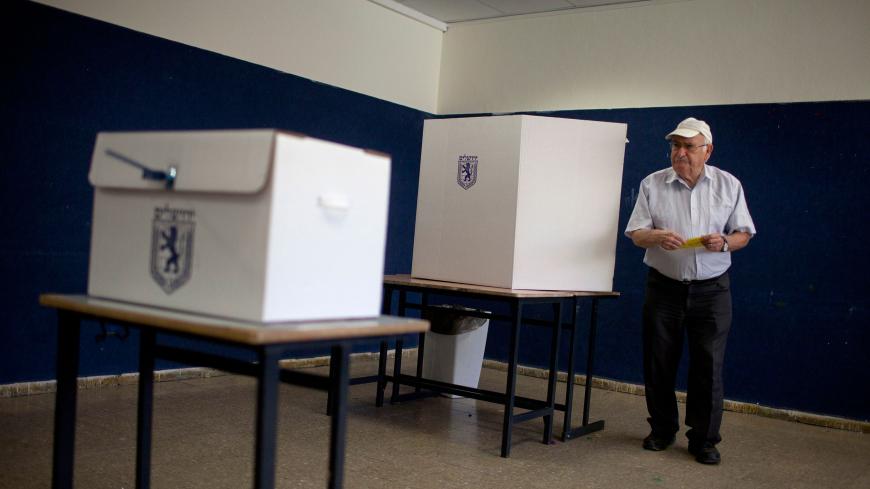 An Israeli man casts his vote in the municipal elections at a polling station in Jerusalem, Israel, Oct. 22, 2013. - Lior Mizrahi/Getty Images

Knesset member Ahmad Tibi of the Arab Joint List party made no effort to conceal his glee at the distress of his Jewish colleagues who had a hard time digesting the population data reported by Israeli officials on March 26 indicating the loss of a Jewish majority in the area between the Jordan River and the Mediterranean. “The vision of an Arab prime minister that now appears a far-fetched idea is drawing nearer,” the veteran lawmaker declared, promising that when that happens, Israel would be “equal and democratic, not Jewish and democratic.”

But the realization of Tibi’s vision is an unlikely prospect. The prospect of a Jewish minority governing an Arab majority — in other words, apartheid — appears far more realistic than one in which an Arab majority with full civil rights rules a Jewish minority. Of the over 6 million Arabs residing between Jordan and the Mediterranean Sea, only 800,000 Israeli Arabs are eligible to vote and be elected to the Knesset.

On the other hand, the announcement this week by Jerusalem Mayor Nir Barkat that he intends to throw his hat into the national political arena and run for the Knesset makes the vision of an Arab at the helm of Israel’s capital city quite realistic. Its feasibility would depend on encouragement by the Palestinian leadership on East Jerusalem’s Palestinian residents to exercise their right to vote and influence municipal politics. According to 2015 data published by Israel’s Central Bureau of Statistics, some 325,000 Palestinian residents of “unified” Jerusalem made up more than a third of the city’s population. A significant majority are registered as permanent residents of the State of Israel and hold an Israeli identification card. However, they are not Israeli citizens; over the past 50 years, Israel has approved fewer than 5,000 applications for citizenship by East Jerusalem’s Arab residents. They are therefore not eligible to vote in Knesset elections but eligible to vote for their city’s mayor and council members and to be elected to those positions.

In local elections held in 2013, Barkat garnered approximately 111,000 votes, 51.1%, while his rival Moshe Lion, who is also running in the upcoming Oct. 30 elections, received some 95,000. In the city council balloting, the ultra-Orthodox factions won 88,000 votes; the two independent lists, that of Barkat and the Wake-up Jerusalem, won all in all 56,000 votes; and 12,000 gave their vote to a joint list of the Labor and Meretz parties.

These figures do not include the Palestinian residents of East Jerusalem, most of whom tend to boycott the elections. Participation by roughly 280,000 eligible Palestinian adult voters could have a dramatic impact on the results. A joint Palestinian ticket reportedly being formed could benefit from splits among the Jewish constituency — between ultra-Orthodox and secular Jews, between left-wing and right-wing voters, and within the right-wing camp and the left-wing camp. There’s nothing stopping such a list from cooperating with the ultra-Orthodox factions and even forging a city council coalition with them based on common interests of the city’s disadvantaged communities.

A poll conducted in January shows that almost 60% of East Jerusalem’s Arab residents support participation in the municipal elections. The poll, conducted by the Palestinian Center for Public Opinion for Hebrew University’s Institute of International Relations and the Israeli-Palestinian IPCRI organization, found that only 13% were opposed to participation. However, under pressure by the Palestinian Authority (PA) and Hamas, and even threats of violent repercussions, most polling stations in the city’s Palestinian neighborhoods are virtually empty on election days. The Palestinian organizations view participation in the voting not only as recognizing Israel’s annexation but also as renouncing the demand for recognition of Jerusalem as the capital of Palestine.

Knesset member Tibi said as much in response to a recent suggestion by former Knesset Speaker Avraham Burg that he run for mayor, writing on his Twitter account, “No thanks! That would grant legitimacy to a city under occupation. … Let’s end the [Israeli] occupation of all areas captured in 1967, including East Jerusalem.” Nonetheless, does the willingness to carry an Israeli ID card and driver's license not constitute recognition of a city under occupation? Are Tibi and his friends in the Palestinian leadership suggesting that East Jerusalem’s Palestinian residents stop paying taxes to the Israeli treasury and forgo Israeli social benefits in order to avoid legitimizing the occupation?

The continued boycott of the Jerusalem elections does not contribute in any way to the struggle against the occupation. On the contrary. Giving up local political representation plays into the hands of the occupation forces. The right-wing settlement movement enjoys complete freedom in pushing ahead with its project to “Jewify” Jerusalem. While the PA is treading the murky waters of the so-called political process with Israel, sewage water is flowing unhampered in the Palestinian refugee camps of East Jerusalem that Israel has annexed. A significant Palestinian representation in the upper echelons of local government could make use of planning and construction tools to block the takeover of the Jerusalem Holy Basin (the Old City and its adjacent territories) by nationalist forces, such as the nongovernmental organizations El-Ad and Ateret Cohanim.

East Jerusalem’s residents must take part in the municipal elections not only to counter the discrimination of its residents on all fronts. They should go out in full force to the polling station in East Jerusalem in the name of their Palestinian brothers in the West Bank. As professor Sari Nusseibeh told me in 2008 when he was considering a mayoral run, “The [Palestinian] candidate in the municipal elections will run not only as a representative of the Palestinian residents of Jerusalem but of the entire Palestinian population in the occupied territories.”

The elections for Jerusalem’s leadership are almost a perfect opportunity to demonstrate to Israelis the validity of Tibi’s vision of an Arab prime minister. A significant Arab municipal leadership in the city that Israeli leaders dub “the unified capital of the Jewish people for eternity” could well drive a far greater turnout of Israel’s Arab citizens in the next Knesset elections to bury once and for all the illusion of the status quo and the delusion of the annexation.