If former Knesset Speaker Reuven Rivlin is elected president with support from the Meretz and Labor parties, it will reveal the bankruptcy of Israel's left. 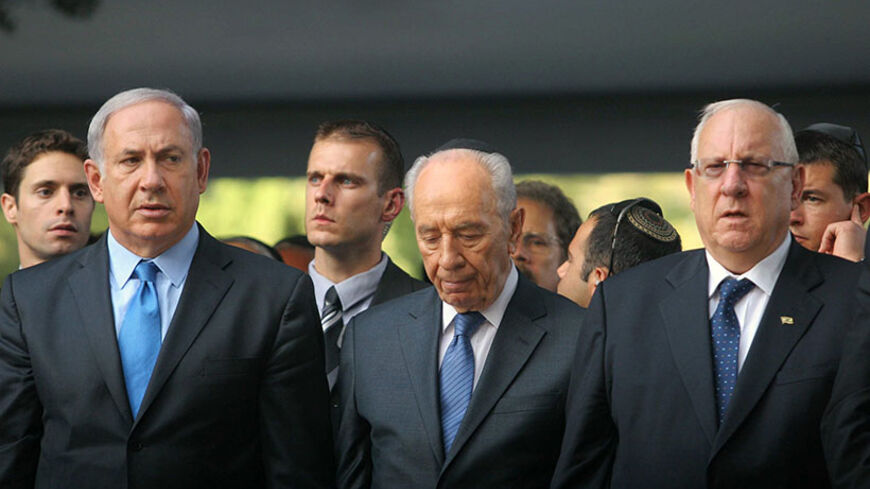 If the Knesset elects Reuven “Ruby” Rivlin as Israel’s president on June 10, he will be the right man at the right time. There is no one more fitting than Rivlin to represent the Greater Land of Israel, the land of the settlers and of self-isolation. There is no time more fitting than this period of diplomatic drought and flood of settlements to bestow Israel's most stately and esteemed role on the person who proclaimed the following on the occasion of the 2012 Independence Day ceremony: “Even in our 64th year of independence, we remember that we were a generation of settlers — and continue to be a generation of settlers.”

Former Knesset Speaker Rivlin is the true face of Israel 2014. He is devoid of pretense, unlike Prime Minister Benjamin Netanyahu, who in his landmark Bar-Ilan speech spoke of a two-state solution but has since spared no obstacle to prevent its implementation. Rivlin speaks out against the two-state solution and also votes against any move that even hints at it. Netanyahu was finance minister in the government of Prime Minister Ariel Sharon that voted in favor of Israeli withdrawal from the Gaza Strip. Since that time, he does not miss an opportunity to present disengagement as a mistake.

As speaker of the 16th Knesset, in 2004 Rivlin lit a torch at the traditional Independence Day ceremony “in honor of the pioneers who [march] before the camp, those who settle the land of our fathers and redeem its earth, from Hanita to Kfar Darom, and from Negba to Kiryat Arba, which is Hebron … and in honor of the State of Israel.” Kfar Darom was a Jewish settlement conquered by the Egyptian army in 1948, rebuilt in 1988 in the heart of a Palestinian population center in the Gaza Strip and evacuated in the 2005 Israeli withdrawal.

Little wonder, then, that Netanyahu tried to extend President Shimon Peres’ term to prevent Rivlin’s election. Rivlin will not travel on Netanyahu’s behalf to the White House to convince the American president that the prime minister is truly willing to withdraw from most of the occupied territories. Rivlin would not have been invited to the Vatican to embrace Palestinian President Mahmoud Abbas in the presence of the pope. World leaders will not come to Jerusalem to celebrate Rivlin’s birthday as they did for Peres as he smiles at the photographers while at Netanyahu’s side, signaling business as usual to the rest of the world.

What the world will see at the construction sites in the settlements and in the scorched Palestinian olive groves, and what the world will hear in the annexation speeches of Economy and Trade Minister Naftali Bennett, are what the world will get. The president’s residence will no longer serve as the main beauty parlor and cosmetics salon for Israel’s right-wing governments.

Rivlin’s supporters in the Labor and Meretz parties, among them former Labor Party leader Shelly Yachimovich, praise Rivlin’s “statehood.” They rely on the rule that “one doesn’t see from here what one sees from there” (i.e., that people adopt different behaviors once they assume office), but when Rivlin occupied the Knesset speaker's chair — the seat closest to the president (by law the Knesset speaker is the president’s replacement) — he stood at the exact same spot he has been standing his entire political career: the farmost corner of right-wing ideology.

True, unlike many of his colleagues in the Greater Land of Israel camp, Rivlin has always fought for equality for Israel’s minorities. He did so, however, because he was willing to risk the loss of Jewish dominance in Israel to guarantee the integrity of the Land of Israel. Knowing Rivlin well — in the interest of full disclosure, we were on excellent terms until I wrote a remark critical of him in the Israeli daily Haaretz and was even told off by his wife — I suspect that moving into the president’s residence will not lead him to change his view that “we must hold on to our belief that the whole Land of Israel is ours.”

Choosing the state’s president is not like picking a doll in a toy store. The history of the presidency shows that not all its officeholders were content with sticking their nose in a handkerchief, as Israel’s first president, Chaim Weizmann, described the extent of the job. President Yitzhak Navon threatened to resign if the government failed to establish an official commission of inquiry into the 1982 Sabra and Shatila massacre in Lebanon. President Ezer Weizmann spoke out in favor of and against the 1993 Oslo Accord. President Moshe Katzav sought to promote a “hudna” (truce) initiative between Israel and the Palestinians. Peres conducted secret negotiations with Abbas. All rejected accusations that they had overstepped their authority and were interfering in issues deemed controversial in Israeli public discourse. All explained that they were not mounting a political struggle against the government, but rather heeding their conscience and acting in Israel’s interest.

This was also Speaker Rivlin’s response to those critical of his campaign against disengagement from Gaza and against Prime Minister Sharon’s objections to building settlements in the West Bank area known as E-1, which links Jerusalem to the settlement of Ma’ale Adumim. In response to claims by Sharon associates that never had a speaker so abused a state office to act against an incumbent prime minister, Rivlin said he was not fighting the prime minister, “only against the withdrawal from Gaza and for the future of Jerusalem.”

As mentioned above, one can understand Netanyahu’s objection to exchanging a fig-leaf president for one who will expose the shame of the settlers’ government (though of course, his objection to Rivlin also has personal elements). Netanyahu would have preferred to abolish the presidency altogether rather than reveal to the world that there is a majority in the Israeli parliament that favors an uncompromising ideologue.

One can of course understand the support of Knesset members from the Likud and HaBayit HaYehudi parties, whose worldview Rivlin faithfully expresses, but it is hard to understand the choice made by a Knesset member (Yachimovich) who is a former head of a party that espouses the division of the Land of Israel for the sake of the future of the people of Israel. She has chosen to support a politician in whose eyes the integrity of the land is of paramount importance. Perhaps as Rivlin represents the real face of the government, Yachimovich and her colleagues in the Meretz and Labor parties who will vote for Rivlin reflect the true, pale face of the Israeli left. Perhaps they reflect the face of a camp that cannot present a candidate who will raise the flag of peace, which was once one of the flags of the state.