Amid an uptick in popular support for Hamas following recent confrontations in East Jerusalem and the Israel-Hamas war, Fatah and the Palestinian leadership in Ramallah are looking for ways to stay relevant. 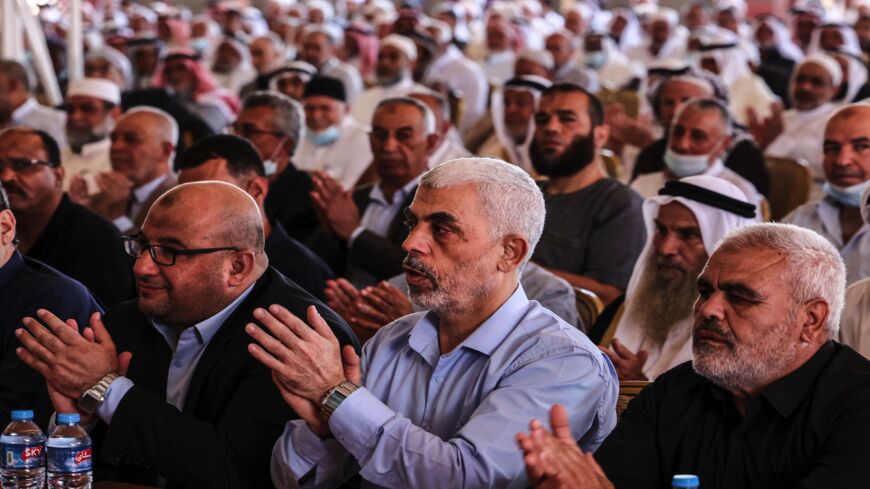 Yahya Sinwar (C), Hamas' political chief in Gaza, attends a rally organized by the representatives of prominent families (mokhtar) in support of "the Palestinian resistance" in Gaza City, on June 20, 2021. - MAHMUD HAMS/AFP via Getty Images

While the new Israeli government headed by right-wing, pro-settler Naftali Bennett starts to settle in, the Palestinian leadership in Ramallah is hoping to engage with them and with the Biden administration.

Reports that the Palestinian government has established a negotiating team has been denied to Al-Monitor by senior officials in Ramallah, but the fact that a story to that effect was published tends to indicate that certain elements within the entourage of President Mahmoud Abbas are looking for ways to be relevant.

Ali Jarbawi, a political science professor at Birzeit University, told Al-Monitor the issue is connected to the calls by the Biden administration for a return to the negotiations track in order to fulfill the two-state solution plan. “But everyone knows there is no solution on the horizon and all this will do is manage the conflict and possibly make it less costly and with less regular conflict.” Jarbawi also believes the Palestinian leadership is looking for ways to remain relevant. “The Palestinian Authority (PA) is interested in a public role, and the return to negotiations can be one that will help give it relevance.”

Prime Minister Mohammad Shtayyeh spoke of the challenge to the new Bennet/Lapid Israeli government. “The opportunity is there for the new Israeli government to show they are ready for peace and the end of occupation and not for the continuation of the settlement policies, land confiscations, death and destruction,” he said.

The latest public opinion poll conducted by the Palestinian Center for Policy and Research Surveys in the second quarter of 2021 shows significant downward changes in public attitudes toward President Abbas and his leadership while showing a marked spike upward in popularity for Hamas.

According to poll director Khalil Shikaki, there were two driving factors that seem to have triggered the change: the popular confrontations in East Jerusalem, the Israel-Hamas war, and the public perception of their outcomes on one hand; and the postponement of elections on the other.

“The findings show a semi-public consensus that Hamas had won the confrontation with Israel and that Hamas’ launching of rockets at Israeli cities has been motivated by its desire to defend Al-Aqsa Mosque and the Palestinian families in Sheikh Jarrah,” said Shikaki.

The findings also show widespread public discontent with the performance of the Ramallah-based government and leadership as well as Fatah during the confrontations and the war. A two-thirds majority reject Abbas’ decision to postpone the elections. And two-thirds of the public believe Abbas postponed the elections because he was afraid of their outcome — not because Israel prevented the holding of elections in East Jerusalem.

As a result, support for Hamas and a willingness to vote for it increased dramatically, while support for Fatah dropped significantly. Moreover, Hamas’ leader, Ismail Haniyeh, would deliver an unprecedented victory over Abbas in a presidential election if one were held today. Perhaps most importantly, a majority of Palestinians think Hamas is more deserving of representing and leading the Palestinian people, while a small percentage think Fatah under Abbas’ leadership is the one that deserves to do that.

The combination of a more involved Biden administration and a newly established Israeli government has whetted the appetite of the Ramallah leadership that was desperately looking for ways to become relevant and improve its standing. This was also demonstrated when Abbas refused to attend a meeting called for by the Egyptian leadership with the aim of consolidating the Palestinian position in preparation for the flow of funds to help in the reconstruction of Gaza, again, after the devastations caused by 11 days of heavy Israeli bombings.

While negotiations seem far away for a variety of external forces, there are a number of internal factors that must be dealt with. Ever since the passing of chief Palestinian negotiator Saeb Erekat in 2020, the Palestinian leadership has not appointed a chief negotiator or even a secretary of the PLO’s executive committee. Senior Fatah leaders are vying for that position, including Minister of Civil Affairs and liaison with the Israelis Hussein Sheikh, but no decision has been made yet. Others being suggested for that position include the senior diplomatic adviser to Abbas, Majdi Khalidi, and, if a new government is formed, current Prime Minister Shtayyeh is seen by some as being appropriate to take that position because he is familiar with all the issues related to it.