Palestinian PM's COVID-19 response gets high marks, but will it be enough?

Palestinians are generally very happy with the performance of their prime minister in confronting the coronavirus and can easily see him as president; the harder question is whether there will be a Palestine to be president of. 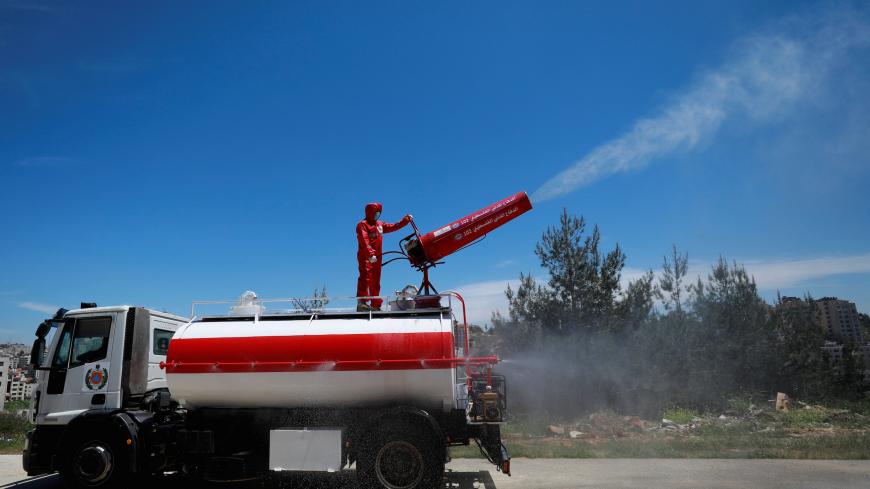 A member of Palestinian Civil Defence on a truck sprays disinfectants during a drill for dealing with coronavirus cases, amid concerns about the spread of the disease (COVID-19), in Ramallah in the Israeli-occupied West Bank April 23, 2020. - REUTERS/Mohamad Torokman

Less than a year after being tapped for prime minister, the head of the Palestinian government, Mohammad Shtayyeh, who was sworn into office on April 13, 2019, was confronted along with the rest of the globe with an unprecedented crisis. Early evaluation gives Shtayyeh and his team high marks for their performance. The praise has been so overwhelming that it has led some to predict that he can potentially fill the shoes of President Mahmoud Abbas once the current 84-year-old Palestinian leader moves out of the political stage.

As soon as coronavirus cases in Bethlehem were confirmed on March 5, Shtayyeh acted with authority, discipline and care. The French television station France24 called the Palestinian prime minister the “star of the virus crisis,” detailing his actions and quoting praise from international experts. “They took action very rapidly and really took the crisis management function to the highest level,” Gerald Rockenschaub, head of the World Health Organization's Palestinian office, said in referring to what Shtayyeh did in response to the pandemic, according to France24.

Palestinian pollster Khalil Shikaki told Al-Monitor that the Palestinian government and its head have gained in popularity, but added, “This doesn’t mean, however, that his ability to compete for the presidency has necessarily improved.”

Shikaki, the director of the Palestinian Center for Policy and Survey Research, notes that the Palestinian public differentiates between managing daily issues and political leadership. He said, “In terms of political leadership, Prime Minister Shtayyeh has yet to be tested; therefore, it is too early to determine if his performance in dealing with the effects of the pandemic can be translated to better chances for the presidency.”

Much more can depend on the economic situation after COVID-19 and how the prime minister will handle it, Shikaki added.

Walid Batrawi, a well-respected Palestinian journalist and former project director of a major media project at BBC and Palestine TV, told Al-Monitor that Shtayyeh has indeed done a very good job in confronting the health emergency. “I believe he has laid a strong foundation in his short term as prime minister so that if his name as a successor to President Abbas is suggested now, it will be well received because he has become popular,” said Batrawi.

Batrawi thinks that in addition to Shtayyeh's professional and disciplined way that he addressed the coronavirus pandemic, many see other reasons for his popularity. “Some see him in a positive way because he is an economist and has a good sense of what is needed economically. Others see his power in that he belongs to the Fatah movement and is backed by President Abbas. But there are those who think he is merely clever at public relations and that in the end, the internal struggle within Fatah is what will decide who will replace President Abbas,” he said.

Ali Jarbawi, a political science professor at Birzeit University, told Al-Monitor that there are many obstacles facing Shtayyeh. “For one thing, there is an absence of a mechanism to choose the president. The Palestinian Legislative Council (PLC) has been dissolved while the Basic Law stipulates that once the president is no longer around, the speaker of the PLC runs things for 60 days until there are elections.”

Jarbawi added that the division between the West Bank and Gaza also hurts Shtayyeh’s possible ambition. “With Gaza out of reach, you are talking mostly about being the president of the PA which the Fatah movement is the ruling party. This means that he needs the support of the Fatah Central Committee first before even thinking of vying for the position of president,” said Jarbawi.

Jarbawi concedes that it is possible that the top three contenders for power could share some of the positions that the current president and late Yasser Arafat controls. He added, “Sure someone can be head of Fatah, another prime minister, and another president. But it is clear that all want to be president, which is the most coveted position at present especially with the Palestinian legislature dissolved while the president controls the security, the money and the passing of laws by means of presidential decrees.”

Ofer Zalzberg, a senior analyst with the International Crisis Group, told Al-Monitor that Shtayyeh has shown his competence and professionalism during the pandemic, and Palestinians are noticing. “But the crisis is not over. Negative economic consequences are already palpable, as is public criticism by some envious Fatah leaders — if things change for the worse, he still risks falling on his face.”

Zalzberg said that “while Shtayyeh's star is rising as a competent manager, this does little to mitigate overall skepticism among Palestinians regarding the Palestinian Authority's strategy and quotidian conduct with which he remains identified.”

With Palestinian politics dominated by those from the era of Arafat in the 1990s, at 62, Shtayyeh is among the youngest senior officials. He speaks fluent English, unlike Abbas, and — having earned a doctorate in development in the United Kingdom — has a strong grasp of the international aid system.

There is no doubt that at the present time the office of the prime minister is important, and if there is a vacancy in the office of the president, whoever is prime minister will have the inside lane to the presidency. The bigger problem, though, is whether there is so much merit at being president of the Palestinian entity, which has receded in power and importance in the past few years.