Shtayyeh government to focus on economy of resistance

New Prime Minister Mohammed Shtayyeh is trying to connect with the Palestinian people to prepare them for austerity measures to withstand the economic pressure being exerted by Israel and the United States. 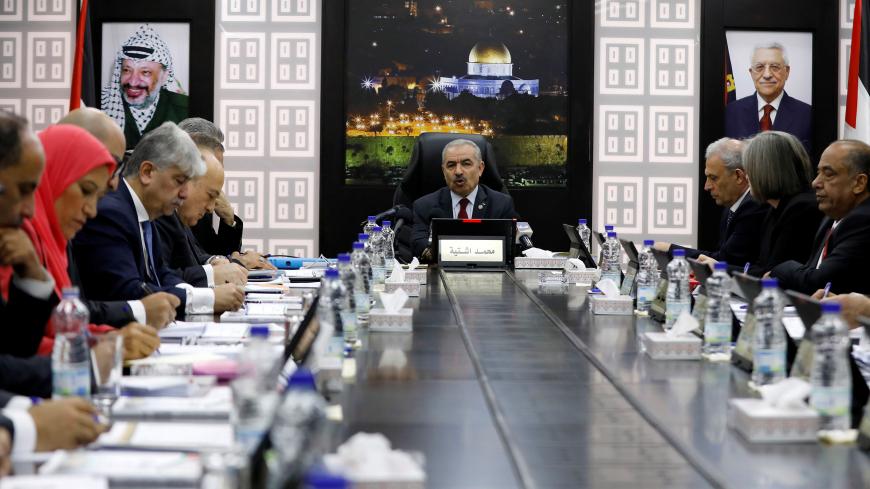 Prime Minister Mohammed Shtayyeh, a Fatah Central Committee member and a leader in the first intifada (1987-1993), appears to be setting his sights on economic austerity and policies of self-reliance, versions of which Palestinians adopted during the first uprising. Shtayyeh told his Cabinet on April 15 at their inaugural meeting that the Palestinians must adopt austerity measures to deal with the difficult economic situation and to avoid having to raise taxes.

“The government is taking over under difficult circumstances,” Shtayyeh remarked to the Cabinet, having arrived at work on foot, rather than in the usual motorcade. A press release by Shtayyeh's office about the meeting stated, “The Cabinet decided to stop buying new cars and to end first-class trips, and all ministers must report their financial status, while at the same time, taxes will not be raised and priority will be given to support the steadfastness of the people of Jerusalem.”

The release also noted that a meeting with international donors is planned for April 30, including briefing them on the financial war being waged on Palestine by the United States and Israel. The location of the meeting was not disclosed.

Shtayyeh is said to be reviewing ways to strengthen the local economy while pursuing an economic policy of steadfastness and resistance. Al-Monitor has learned that to this end and to separate the Palestinian economy from Israel, the government will introduce a plan to phase out use of the shekel, replacing it with other currencies, including the Jordanian dinar, the US dollar or the euro.

Muntaser Hamdan, head of the investigative journalism unit at the pro-Fatah daily Al-Hayyat al-Jadida, told Al-Monitor that the new prime minister will try to adopt his economic policy to local situations. “In the north, he will focus on agriculture, while in the south on trade and in the center on management and services,” he explained.

Hamdan also predicted that Shtayyeh will try to reestablish relations with Israel after a new government is formed. While security coordination has been ongoing between Israelis and Palestinians, there has been very little political coordination. The situation between both sides worsened when Israel decided to reduce the customs and tax monies it collects for the Palestinians as punishment for the Palestinian government supporting families of prisoners and martyrs.

Walid Batrawi, a former trainer with BBC Media Action, the British broadcaster's international development charity, told Al-Monitor, “The government has given people hope and will not go against the will of Palestinians in internal issues.” Shtayyeh is the first prime minister from the Fatah movement since 2005.

The new government will also for the first time have a minister of entrepreneurship and economic empowerment. Osama al-Saadi, an engineer and former member of the Gaza Housing Commission, holds that portfolio.

Majed Arouri, executive director of the ISTIQLAL, the Commission for the Independence of the Judiciary and the Rule of Law, told Al-Monitor that the new government will have a huge challenge in ensuring that public servants are paid on time and in full. He also asserted, “The new government will have to oversee the possibility of elections and to do that, [it] will need to address Palestinian divisions while at the same time dealing with a radical Israeli government.”

Arouri believes that without elections, the government, even one headed by a Fatah leader, will not be able to make difficult decisions. He remarked, “Decisions are still made by President [Mahmoud] Abbas, and the proof of that is that the prime minister was unable to touch some of the major cabinet positions like the foreign and finance ministries.” Foreign Minister Riyad Malki and Finance Minister Shukri Bishara, close allies of Abbas, retained their positions in the new government.

Arouri was less-than-optimistic in general, asserting, “[Fatah's internal politics] will weaken the new government especially in light of the bleak political future and the struggle over the post-Abbas presidency.”

Shtayyeh had hoped to establish a Cabinet broadly supported by the PLO factions, but it consists only of Fatah members and representatives from some of the smaller organizations. The government does not have the support of the Popular Front for the Liberation of Palestine or the Democratic Front for the Liberation of Palestine. Hamas was not asked to join Shtayyeh's government.

Hanna Issa, director of the Islamic-Christian Commission for the Support of Jerusalem and Holy Sites, stressed the need for the new government to focus on national and geographic unity. He told Al-Monitor, “Prime Minister Shtayyeh will need to deal with internal issues, especially the Jerusalem file, while everyone awaits the publication of the US ‘deal of the century,’ and all this without the needed resources in the Palestinian treasury.”

The internal and external challenges facing Shtayyeh are larger than any one person can manage, even with a large political movement behind him. Shtayyeh appears to have made the correct decision in trying to build trust with those he will govern to obtain their support as he tries to implement the austerity measures needed to withstand the pressure being brought to bear by the United States and Israel.