The independent report about the deal between the Palestinian government and Israel that led to the PA's receipt of expired vaccines has been finalized and made public with leads on incompetence and oversight. 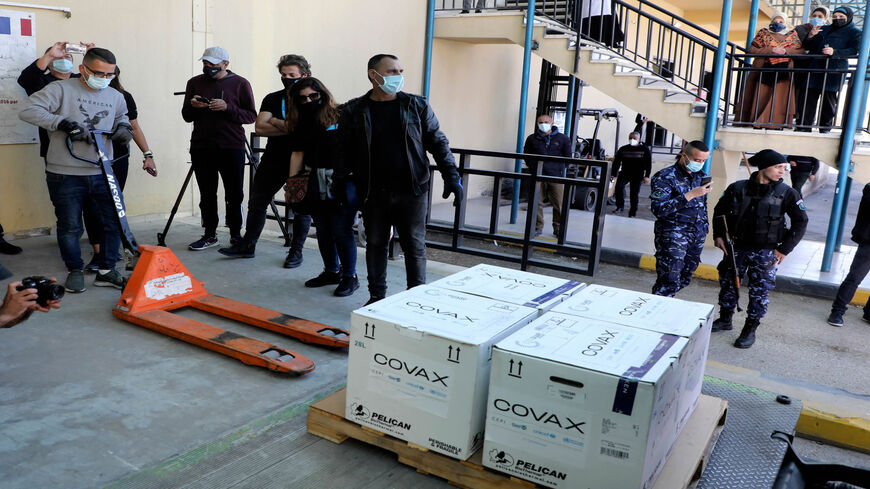 A worker unloads a refrigerated truck carrying the first delivery of the coronavirus vaccine via the United Nations Covax program, to be kept at the Palestinian Authority's storage facility in Nablus, West Bank, March 17, 2021. - Jaafar Ashtiyeh/AFP via Getty Images

An independent investigation committee charged with examining the modalities of a botched Palestinian-Israeli agreement to provide Palestinians with the Pfizer/BioNTech vaccine has produced a scathing report that reflects incompetence by the Palestinian Health Ministry and government officials.

The committee headed by Ammar Dwaik, CEO of the Palestinian Independent Commission for Human Rights, and his team of professionals presented Prime Minister Mohammad Shtayyeh with a 30-page 7-annex report that detailed the problem and offered concrete recommendations.

According to the report, the state of Palestine had secured an excellent agreement with Pfizer signed in April and approved by the Palestinian Cabinet: The agreement provided over 4 million shots of the needed vaccines for a very low cost of $6.75 per shot.

However, because the delivery dates of the different tranches of the vaccine were not immediate, an offer was made to take some of the unused Pfizer vaccines from Israel, which would have provided a quicker availability of the badly needed vaccine.

Israel dragged its feet with providing an agreement that was given to the Palestinian Minister of Health Mai al-Kaila to sign on June 17, with the vaccines being made available the next day. Unlike the original Pfizer contract, the agreement with the Israelis was totally skewed to the Israelis. The minister signed it with the hope of administering the vaccines as soon as possible. The following morning, the first batch of the vaccine was delivered four hours late thawed to around 2-9 degrees Celsius, instead of the -70 degrees Celsius as required, and without the data logger. After reviewing it and due to the numerous Israeli violations of a signed agreement, they returned the vaccines to the Israelis.

The report that provided specific and technical details of the above called on the government to further investigate if any violations or criminal acts were committed. Palestinian government spokesman Ibrahim Melhem told Al-Monitor that the government “will take all needed actions against anyone who is proven to have failed in carrying out their duties or were negligent when receiving the vaccines.”

Ammar Dwaik, head of the committee, told Al-Monitor that all Palestinian government officials and agencies were cooperative with the investigative committee and provided all needed documents. "The report is objective and placed everything in its proper perspective," he said.

But Dwaik was concerned about the lack of serious follow-up by the Palestinian government. He noted, “The official media was totally silent on the report and the prime minister has not acted yet in terms of beginning to implement the recommendations.”

The daily Al-Quds and Al-Ayyam newspapers ran the report of the investigation on their front pages, but the Wafa news agency, the government-owned Al-Hayyat al Jadida and both the voice of Palestine and Palestine TV ignored the entire story.

The American Axios media outlet said in a report from Tel Aviv that Netanyahu was behind the delay in the transfer of the vaccine to the Palestinians. “Bennett quickly approved a vaccine deal with the Palestinian Authority [PA] that Netanyahu had held up for months. He was disappointed when the deal collapsed, Israeli officials say, because he had seen a positive first step in relations.”

Bassem Khoury, CEO of a pharmaceutical company and a member of the investigative committee, told Al-Monitor that there is a huge gap between the Pfizer deal and the Israeli one. He said, “We were so impressed with the deal with Pfizer that was carried out with lots of input and finally approved by the Cabinet and the last-minute biased deal that the minister signed at the last moment. It leaves many questions still unanswered of why the agreement with the Israelis was not presented to the usual legal and other consultants and got the approval of the Cabinet.”

Khoury, a former Palestinian Cabinet minister in the Fayyad government, said the Israelis' irregularities were very stark. “Imagine they brought the first shipment that had the words Ofer camp [a reference to an Israeli prison where Palestinians are held] on them, which is a violation of the agreement that requires the sender’s name on the packages to match what is in the contract.”

Khoury said that everything was rushed in a way that violated the normal very careful process that exists in the Ministry of Health. Khoury revealed that at least one Ministry of Health official recommended that the deal with the Israelis should not be signed in the way it was written. Among other things, the Israeli-drafted agreement removes any responsibility from Israel and considers only the Tel Aviv courts as the legal reference of the agreement. But for Khoury the biggest violation was the absence of the data logger. “Every batch is supposed to have an acknowledgment of the temperature that the batch is at. We received thawed vaccines that were not even documented in the mandated data logger.”

The investigative report clearly states that the prime minister, the Cabinet and the Civil Coordination Authority are ultimately responsible, as they should have scrutinized the deal with Israel. Since the deal was an external agreement with Israel signed on behalf of the PA, it is, therefore, a collective responsibility. The routine procedure is that the minister of health should have been barred from signing international deals without prior scrutiny and approval.

While the investigative report is informative, thoroughly researched and well assembled with all necessary documentation, it leaves a number of crucial questions as to what was the reason for the pressure that was placed on the Palestinian minister of health to sign her name to an international document that should have gone through the Cabinet and was not shared with anyone. The process was totally lacking in any transparency both within the government and with the public at large, and in this sense, everyone including the prime minister is responsible for what had happened — and not just the minister of health.