The state visit by a Palestinian delegation headed by Prime Minister Mohammad Shtayyeh to Iraq appears to have produced a number of economic and political breakthroughs that will contribute to Palestinian economic independence. 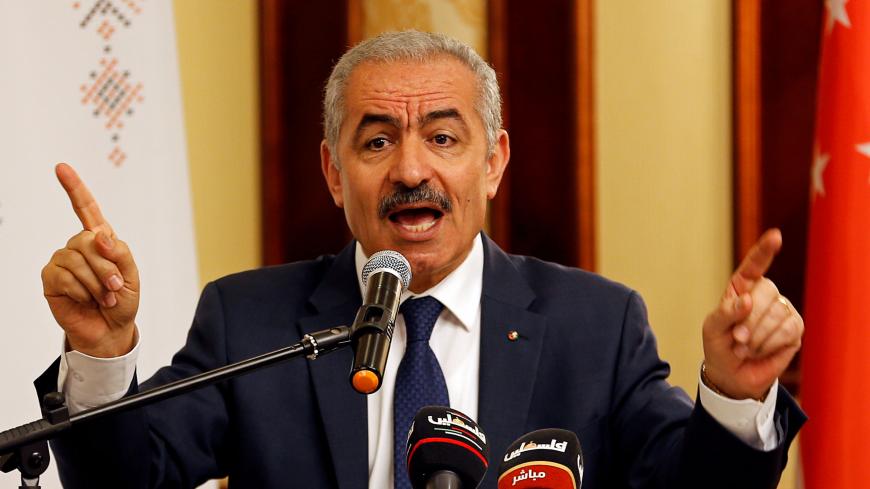 Palestinian Prime Minister Mohammad Shtayyeh gestures as he speaks during a workshop on cooperation between the Palestinians and East Asian countries, in Jericho, West Bank, July 3, 2019. - REUTERS/Mussa Qawasma

Ever since Adel Abdul Mahdi became the prime minister of Iraq, Palestinian officials have been encouraged to go to Baghdad. They were told that the new Iraqi prime minister who, according to PLO officials in Ramallah, spent time in the 1980s in Lebanon and was very close to the PLO at the time, and his team have a genuine love for Palestine and are willing to translate this into strategic support.

Nabil Shaath, senior international affairs adviser to Palestinian President Mahmoud Abbas, paid a five-day visit to Iraq on June 23-27, where he met senior Iraqi officials and gave a series of lectures. After his return to Ramallah, Shaath told Al-Monitor that the trip was successful, saying that Iraq is coming back strong, is united and diverse and its prime minister has a genuine love for Palestine.

While much of Shaath’s trip was focused on countering the US-led Bahraini economic workshop — which Iraq, like Palestine, boycotted — the visit prepared for a much wider governmental visit that would deal with substantive economic issues.

A key component of the visit was the fact that Iraq was offering Palestine oil at much reduced prices, Al-Monitor learned from sources close to the Palestinian prime minister. But since there are no refineries in Palestine, the offer had to wait until an appropriate solution came. This came during the official visit by Prime Minister Mohammad Shtayyeh to Jordan. During the July 7 visit, three agreements were signed, including an energy pact that provided for the Palestinians to refine any future oil obtained from Iraq at the Jordanian Petroleum Refinery in Zarqa, Al-Monitor learned from the source in the Palestinian Prime Ministry.

With the refinery deal in hand, Shtayyeh assembled one of the largest governmental delegations ever to leave Palestine. On July 15, Shtayyeh took with him to Baghdad Minister of Foreign and Expatriate Affairs Riyad al-Malki, Minister of Finance Shukri Bishara, Minister of National Economy Khaled Assali, Minister of Agriculture Riyad Attari and Palestinian intelligence service head Majid Faraj.

After the visit, which included meetings with Iraqi Prime Minister Abdul Mahdi, President Barham Salih and parliament Speaker Salim al-Jabouri, the official spokesman for the Palestinian prime minister, Ibrahim Melhem, told Al-Monitor that the visit to Baghdad had been of "extraordinary" significance. He added, “The visit carries extraordinary significance because of its timing and the subjects on its agenda, which complement the earlier visit to Jordan, all aiming at strengthening Arab ties. Our goal is to execute our strategy of gradually delinking Palestinians from the colonial relationship with the occupiers."

Upon his return to Ramallah, Shtayyeh spoke at the weekly Cabinet meeting July 17 about the significance of the visit. “The meetings between the two sides were very fruitful, and the most important result was that Palestinians in Iraq — [amounting to] about 7,000 refugees — will receive treatment as Iraqis and will get their full rights,” Shtayyeh was quoted by the official Wafa agency as saying.

Shtayyeh added, “The Iraqi leaders have asserted that their country will fulfill all of its financial obligations to the Palestinian Authority, as it has pledged at the Arab League.” Al-Monitor has learned that Iraq’s pledge to Palestine amounts to $180 million.

In addition, Wafa reported Shtayyeh telling the Cabinet, “Iraqi institutions, ministries and markets are open for anything Palestinian," noting, "The bilateral meetings between their two countries dealt with several issues — most notably import and export, investment, agriculture, energy, opening Palestinian banks in Iraq and the import of petroleum — and that he will set up companies between the Palestinian and Iraqi sectors."

Abbas Zaki, member of Fatah’s Central Committee in charge of relations with the Arab world, told Al-Monitor that the meetings in Baghdad and earlier visits were very important. “Agreements with Jordan, Iraq — and soon with Egypt — allow us to have an Arab economic alternative to the one-sided dependency on Israel, thus making it much easier to delink from the occupiers.” It is unclear what Zaki referred to in regard to a pending agreement with Egypt.

Zaki, who had returned from a pan-Arab meeting in Beirut on July 7, said, “Our brothers in Iraq are dedicated to support Palestinians who are in unison in supporting Palestine.”

He said that the meeting in Beirut included more than 300 activists representing unions federations and political parties, “speaking in a unified way against the US-led plans and the need to give priority to Palestine.”

When Shtayyeh took over as prime minister of Palestine in April, he vowed to work on a gradual strategy to weed Palestine from its dependency on Israel and to search for alternatives in the region. Judging by this visit to Baghdad and an earlier one to Amman, Shtayyeh appears to be producing impressive results. Whether it will be enough to fully separate from Israel is hard to predict, but the economic benefits of the visit along with the ability to get cheaper oil and support the cash flow of the near empty Palestinian Treasury will embolden Palestinians and allow them to withstand the economic pressure from the United States and Israel.