A Palestinian delegation to Egypt discussed ways to boost cooperation in the fields of oil, economy and trade as Palestinians work to sever economic ties with Israel. 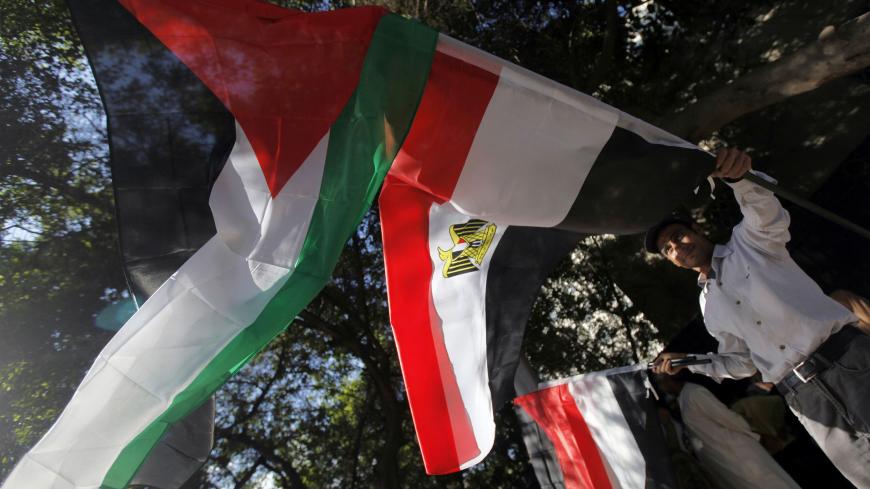 Shortly after the Palestinian delegation's return from Egypt, Palestinian Minister of Agriculture Riyad Attari received a call from his Egyptian counterpart Izzedine Abu Stet. According to Palestinian government spokesman Ibrahim Milhem, the Egyptian official thanked his Palestinian counterpart for a successful visit and expressed his willingness to accelerate the importation of Palestinian dates to Egypt.

Milhem, who participated in the visit, told Al-Monitor that the three-day meetings that included 11 cabinet ministers were “warm and highly successful.”

Cairo is the third Arab capital after Amman and Baghdad a large Palestinian governmental delegation has visited in the last three months as part of efforts to economically delink Palestine from Israel and strengthen Palestinian-Arab economic relations.

Milhem told Al-Monitor that the Egyptian government agreed to a number of requests to accelerate economic relations. “Both sides agreed to do what is needed to improve and speed up economic relations, including easing travel restrictions to Palestinian businessmen and country of origin agreements.” These agreements ensure that products smuggled in from one country can't be labelled as from another.

The two delegations also discussed “opening the Egyptian market to Palestinian exports, especially in the agriculture field, while calling on Egypt to replace Israel in importation of various items such as cement and expertise in areas such as oil and gas exploration and in fish farming,” Milhem added.

Egyptian-Palestinian trade is very modest, largely because of the long delays and obstacles to trade, often taking weeks to process paperwork for imports or exports. Both sides agreed to simplify procedures.

Melhem said that the Egyptians also offered 30 annual medical scholarships, including 10 from the Gaza Strip, and also offered to train religious imams.

The Palestinians were forced to rush to delink from Israel and to improve ties with neighboring Arab countries when the Israeli government unilaterally decided in February to cut what amounts to about $138 million annually from the taxes and customs Israel collects on behalf of the Palestinian Authority at various border crossings controlled by Israel. The Palestinian strategy is to trade directly with Arab countries, especially Jordan and Egypt, who have peace treaties with Israel, to circumvent the ability of Israel to control Palestinian revenues.

While in Cairo, Palestinian Prime Minister Mohammad Shtayyeh gave a lecture at the Ahram Center, where he spoke of the importance of this first state visit to Egypt by a senior government delegation since 1994 and the problems posed by Palestinian dependence on Israel. Palestine imports $4.1 billion worth of products and services from Israel per year while exporting a mere $800 million, Shtayyeh told the Egyptian audience Oct. 9.

Speaking to the Egyptian TV station DMC Oct. 12, Shtayyeh said that it is unacceptable that the trade between two neighboring countries like Palestine and Egypt reaches no more than $160 million per year. “There are many areas and products the Paris Protocol allows us to trade, including importing cement and other building materials, agricultural and technological products and services. We plan to see if Egypt can be an alternative to Israel in this regard,” Shtayyeh said.

The contacts made in the visits to Amman, Baghdad and Cairo will require a lot of work to develop. While Israel can’t stop such cooperation, it can make life difficult for businesspeople who shift their focus outside the area to neighboring countries.

Maan News editor Naser Laham wrote Oct. 9 that this change will not sit well with many Palestinian companies and businessmen who have made their wealth by engaging with Israelis. “Can we boycott products from the occupiers and create a Palestinian-Arab economy in cooperation with Egypt, Jordan, Iraq and others? Theoretically, yes. But the danger is always in the exceptions. There is always an excuse for making exceptions for the sons of people in power under the justification that this is in the public interest, when it is really for personal gain.”

The US and Israeli attempts to pressure Palestine appear to have backfired. If the current efforts succeed in building a strong Palestinian economic relationship with Arab countries, it could be an important step to begin delinking Palestine from Israel and its half-century of occupation.