Palestinian skeptics not yet sold on elections

As the prospect of Palestinian general elections draws near, Palestinians are skeptical about their success as divisions remain between the rival Fatah and Hamas movements. 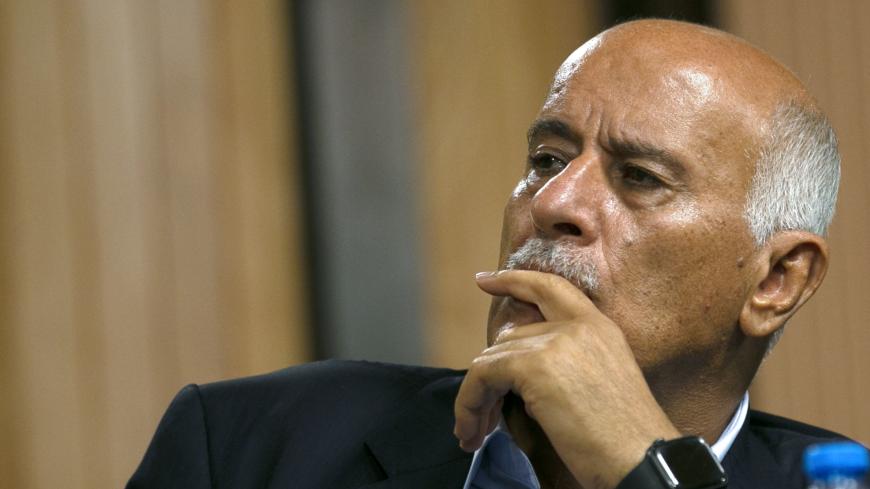 Could senior Fatah official Jibril Rajoub become the next speaker of the Palestinian Legislative Council? Here he is seen in the West Bank city of Ramallah, attending a virtual meeting with Hamas leader Saleh Arouri (unseen) discussing Israel's plan to annex parts of the Israeli-occupied West Bank, on July 2, 2020. - (Photo by ABBAS MOMANI / AFP) (Photo by ABBAS MOMANI/AFP via Getty Images)

The leading Palestinian daily newspaper Al-Quds dedicated a red headline to its Jan. 16 issue, announcing the issuance of three election-related presidential decrees. But this breakthrough, which was welcomed by leading Palestinian, Arab and international players, were also met by skeptics.

A major worry about the holding of Palestinian general elections continues to be the internal conflict between the two biggest factions, Fatah and Hamas, as well as the deep divisions within the two organizations, especially Fatah.

Marwan Muasher, vice president of the Middle East program at the Carnegie Endowment for International Peace and a former deputy Jordanian prime minister, told Al-Monitor that Palestinians need to be unified before they can move ahead with a serious effort such as holding national elections. Muasher welcomed elections as a gateway for Palestinian legitimacy. “National elections serve to renew Palestinian legitimacy, which has been significantly impacted.”

But Muasher also warned that without national unity elections will fail, insisting that “national unity is a necessary first step.”

Palestinian analyst Hani al-Masri, director of the Ramallah-based Masarat think tank, said holding elections before national reconciliation is complete is a “formula for trouble.”  Masri told Arab News, “Issuing presidential decrees for elections before reconciliation is doing things in reverse order. To have elections, the land mines must be removed. If we don’t address some of these problems, we are inviting trouble.”

Palestinian factions, including the leaders of Hamas and Fatah, are expected to meet in Cairo next week to try to resolve logistical and other issues for elections.

However, discussions among Palestinians are surfacing that a possible joint Fatah-Hamas list based on a ratio of 70 Fatah to 60 Hamas candidates will be discussed in Cairo. Israeli media quoted Palestinian sources as saying that the discussion is that Jibril Rajoub would become the next speaker of the Palestinian Legislative Council (PLC) as part of this joint agreement.

The Palestinian Basic Law stipulates that if the president is unable to carry out his duties whether due to death or resignation, the speaker of the PLC becomes president for 60 days until presidential elections are held.

The joint Fatah-Hamas list would also overcome a major problem for Fatah, namely the fear that if it doesn’t unite with the faction of Mohammed Dahlan, Fatah would not be able to win the coming elections.

But such A joint list was quickly opposed by Fatah’s Central Committee member Nasser al-Qudwa. Qudwa issued a strongly worded statement opposing the idea, calling it “undemocratic and smells of personal gains on the account of the people.”

Qudwa, who was the PLO’s envoy at the United Nations and is a nephew of former President Yasser Arafat, added in his statement that he would favor a left-wing list of PLO factions but not a list that is not feasible politically.

The idea of the joint list was also dismissed by leading Palestinian pollster Khalil Shikaki, who told Al-Monitor that the coming months will be critical as to who will win. “If we look at recent polls, including our poll in mid-December, Fatah has consistently scored higher than Hamas and it is the more likely party to create a governing coalition. But the idea of the joint list will never see the light.”

Shikaki, who is the director of the Palestinian Center for Policy and Survey Research, said predictions will depend on the situation in the coming months. “If we look generally at the last five years, including the last poll we conducted in mid-December, Fatah has consistently received the highest percentage. In December it scored 38% while Hamas received 34%. In the past five years, Fatah has averaged 35%-40% while Hamas has averaged 30-34%. Secular parties from the left and third parties together can get 10%-25%.”

The Palestinian pollster said that the new election law, which is based on a single national vote based on proportional voting, will favor Fatah in creating a coalition. “Had we had this electoral system in 2006, Hamas wouldn’t have been able to have an outright majority.”

Shikaki said Hamas will not win outright this round, even though it has a more committed base, while Fatah is divided into three factions — the official one headed by President Mahmoud Abbas, the Dahlan faction and the faction of Marwan Barghouti. Shikaki said he believes that if the Dahlan faction joins the official Fatah list, the overall gain to Fatah will be less than if Barghouti joins the official Fatah list. “If Barghouti joins Abbas, Fatah could get more than 40%, while if Dahlan joins, Fatah will drop to less than 35%. A pro-Dahlan list will not get more than 5% — mostly from Gaza.”

Palestinian internal issues need to be resolved before the May 22 declared date for elections. Some skeptics say that the elections will not happen; but the local, regional and international support for elections and the momentum that has been gathering will make it difficult to postpone elections.