With the help of human rights groups, Hani Awad has resisted Israeli attempts to evacuate him and his family from an Israeli settlement in the West Bank, Linah Alsaafin writes. 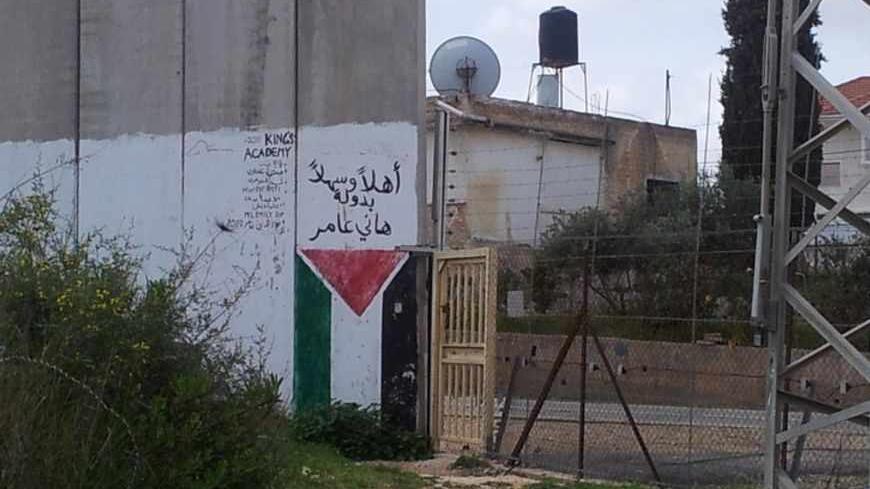 A grafitto on the wall partially surrounding Hani Awad's house in the settlement of El Kana reads, "Welcome to the state of Hani Awad," March 30, 2013. - Linah Alsaafin

The villagers watched uneasily as Jewish caravans set up on their lands in the mid-1980s, which later fully expanded into the construction of three settlements: El Kana, Etz Efraim, and Sha’arei Tikvah.

Almost overnight, Hani Amer lost 27 dunums [about 8 acres] of his land. He now lives on the one remaining dunum, but within the newly demarcated boundaries of the El Kana settlement, a unique case that the Israeli authorities attempted, but failed to correct.

Hani’s new neighbors, Jewish settlers, did their best to terrorize him and his family into leaving. They would gather at night, across from one of the four fenced-off areas of Hani’s home, and shoot live ammunition in the air. Sometimes they threw rocks at the windows, but the settlers always would chant and scream racist remarks.

The Israeli authorities planned to build the apartheid wall around Hani’s house to isolate him completely from the rest of the village of Mas-ha, and a further delineation between the settlement and the village. One day in 2005, Hani came home from work and found that Israeli bulldozers had already demolished part of his house.

“I stood in front of the bulldozer and told them that if they wanted to move one inch it would have to be over my dead body,” Hani told Al-Monitor. “They replied that they had their orders and that in place of my house the wall was going to be built. I got a huge rock and threatened that I’d bash their heads with it if they didn’t clear off.”

That worked temporarily, especially with dozens of international activists forming human chains around the house, but Israeli workers returned and the following year, razed Hani’s farmland in front of his house, which was valued at $500,000, along with the chicken farm. In their place, the foundations for the apartheid wall were laid, which quickly grew into 8 meter [26 feet] high concrete blocks.

The original plan to encircle Hani’s house by the wall was unsuccessful due to international pressure from human rights organizations. Instead, the other half of the planned route consists of a metal fence, a watchtower and a gate, which Hani battled for years until he finally won the right to hold the key to the gate at all times.

“At first, the Israelis told us that they would only open the gate for 15 minutes a day,” Hani said. “They controlled who could come to our house, which meant almost no one. The soldiers are used to ordering us around and expecting helplessness and submission from us, but I tell you what … if you stand your ground and act according to your own terms, the Israelis will eventually relent.”

Incidents such as when Hani’s youngest child, who was then three years old, was once locked outside the gate made Hani even more determined to create some freedom of space in the prison his family was in. Despite the mother’s pleas, the soldiers refused to open the gate and let the child in. Some villagers working at a gas station came and took the child with them as night fell, and when Hani returned from working in the fields he went to pick up his child and decided that one way or another, he was going to have full possession of the key and the gate would be open at any time he decides.

With the added pressure from the International Committee of the Red Cross, the key was finally in Hani’s hand.

Hani was once a migrant worker in Saudi Arabia, Iraq, Egypt and Jordan. His parents were displaced in 1948 from their village of Kufr Qasim, which lies just across the Green Line. They settled in Mas-ha, which lies just west of Salfit and has a population of around 2,000 Palestinians.

The father of six once had officials from Israel’s Ministry of Defense pay him a visit. They tried to persuade him to sell his house and live in the family home in the village’s neighborhoods. But Hani refused adamantly and to make sure that he had no recourse, sold the family home and remained in his encircled house.

“I’ve lost so much money for standing on my ground,” he said, “but I actually consider myself as a winner. I’ve still got my house, and despite Israel’s malevolent attempts, I am still here. That’s worth all the money in the world for me.”

With Israel’s newly created coalition government touted as the most pro-settler yet, the future of the West Bank may experience a fundamental shakeup in terms of population and a plethora of settlement building, with Trade Minister Naftali Bennett promising to double the Jewish settler population to one million and to annex the majority of the West Bank. For Mas-ha and the surrounding villages, their own populations have been swallowed up by the settlers from the three aforementioned settlements, who now number 60,000.

One mocking graffito spray-painted by one of Hani’s sons on the apartheid wall is clear even from a distance and reads: “Welcome to the state of Hani Awad.”