Condemnation comes as Washington rallies European and Gulf support for implementing the cease-fire and 2019 Riyadh agreement. 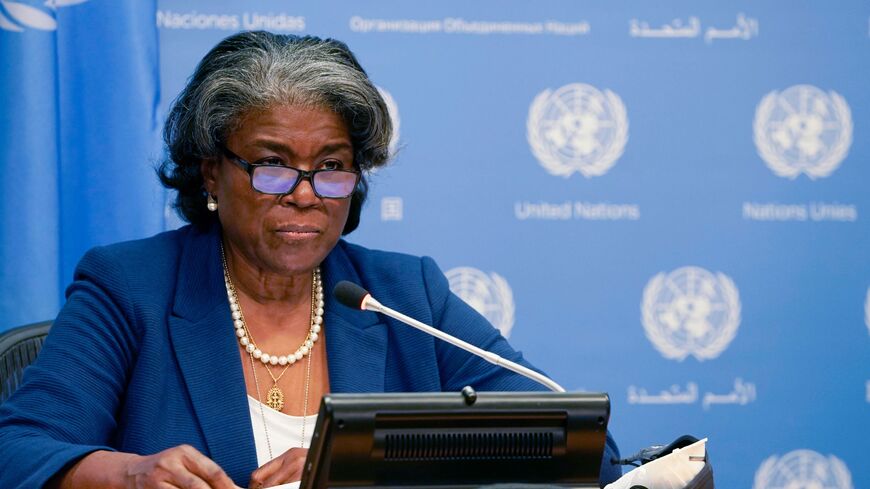 US Ambassador to the United Nations Linda Thomas-Greenfield speaks during a press conference at the UN headquarters in New York on March 1, 2021. - TIMOTHY A. CLARY/AFP via Getty Images

The US ambassador to the United Nations, Linda Thomas-Greenfield, slammed Yemen’s Houthi rebels for ignoring a cease-fire proposal announced by Saudi Arabia this month and refusing UN inspectors access to an abandoned oil tanker off Yemen’s coast.

“Houthi actions to date do not lead us to believe they are committed to a peaceful resolution to the conflict,” Thomas-Greenfield said Thursday during a meeting of the UN Security Council.

Thomas-Greenfield accused the Houthis of pressing their offensive against the Yemeni government stronghold of Marib and said the rebels have “continued to move the goalposts” on allowing international inspectors access to the deteriorating Safer oil tanker in the Red Sea.

The ambassador’s comments came just hours after the Saudi Arabia-led military coalition said it shot down five ballistic missiles and four armed drones fired from Houthi-controlled territory in Yemen toward the area of Jazan in southern Saudi Arabia.

Debris from one of the intercepted projectiles caused a fire at Jazan University, according to local reports.

Earlier this week the Saudi-led coalition said it had intercepted three armed drones and a ballistic missile heading toward the southern Saudi cities of Khamis Mushait and Jazan.

More than 70 pro-government fighters were reportedly killed earlier this week in fighting around Marib as the two sides traded territory outside the city.

Despite US support, the Saudi-led coalition — which backs Yemen’s government of President Abd Rabbo Mansour Hadi — has failed to roll back the rebels’ progress in the country. The Houthis, who have received training and weapons technology from Iran, now rule over a majority of Yemen’s population.

The United Nations has dubbed the conflict the world’s worst humanitarian crisis, with more than 80% of Yemenis in need of humanitarian assistance.

US President Joe Biden has made a priority of ending Yemen’s conflict through diplomacy and stopping support for the Gulf coalition’s offensive military operations in Yemen.

Earlier this month the Saudi government offered limited concessions on Houthi demands to end the coalition’s blockade on Yemen.

Thomas-Greenfield signaled that the Biden administration intends to double down on its diplomatic push to end the conflict. “I believe we have a real opportunity here. We can implement a cease-fire,” she said Thursday.

“We can pressure the Houthis to stop the violence and violations. And we can address the humanitarian crisis. This is a rare opportunity for progress,” she said.

Special envoy for Yemen Timothy Lenderking returned to the United States from a third diplomatic trip to the region on Friday.

Lenderking stopped in the United Arab Emirates and Berlin, where he met with representatives of permanent member states of the UN Security Council as well as German, Swedish, EU and Kuwaiti officials "to discuss the importance of reaching a lasting solution to the conflict and taking action to mitigate the humanitarian crisis," according to the State Department.