In mass trial of 497 defendants, an Ankara court issued 32 life sentences to former soldiers Wednesday for their involvement in a 2016 coup attempt to oust Turkish President Recep Tayyip Erdogan. 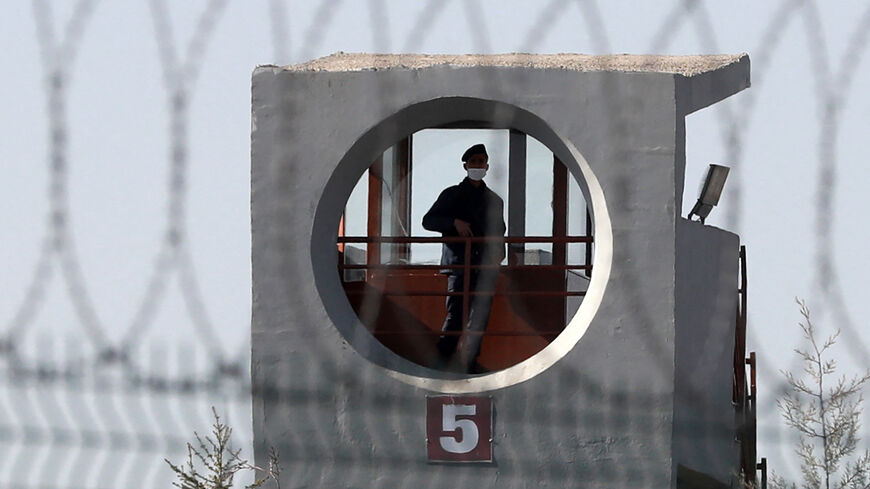 A soldier in a watchtower stands guard at the courthouse of Sincan, outside Ankara, on April 7, 2021, as the verdicts are read in the trial of 497 defendants in the 2016 coup attempt. - ADEM ALTAN/AFP via Getty Images

ISTANBUL — In one of the final mass trials stemming from the failed 2016 coup in Turkey, an Ankara court sentenced 32 former soldiers to life in prison Wednesday for attempting to oust Turkish President Recep Tayyip Erdogan.

A total of 497 defendants, including former soldiers in the presidential guard regiment, stood trial in the Sincan courthouse just outside Ankara. Among those convicted of “violating the constitutional order” were former military officials who attempted to take over the military headquarters in Ankara and the national broadcaster TRT.

The coup attempt left about 250 people dead and shook the nation, leading to an ongoing crackdown on government opponents and mass dismissals of public servants suspected of supporting Fethullah Gulen, a US-based cleric Ankara accuses of fomenting the failed putsch. Gulen denies the charges and the United States has yet to fulfill a request for his extradition by the Turkish government .

Former Col. Muhsin Kutsi Baris, who had commanded the presidential guard regiment, was sentenced to 61.5 years and 106 other defendants received prison terms between six and 16 years. Except for fugitive defendants, others on trial were acquitted or were not sentenced to prison.

The convictions conclude a case that began in 2017 and mark the final coup trial to take place in the sports-arena-sized Sincan courthouse, which was specially built to host coup-related hearings.

Nearly five years after the failed coup, the event has reshaped Turkish politics and deepened polarization in the country amid resulting turmoil and democratic backsliding under Erdogan, who is the main plaintiff in coup-related trials.

With the establishment of an executive presidential system in 2018, Erdogan consolidated governing powers affording him more influence over the nation’s judiciary, raising concerns among human rights advocates over Turkish courts’ independence.

“Especially since the coup attempt, the judiciary has been under incredible pressure in Turkey,” Nate Schenkkan, director of research strategy at Freedom House, told Al-Monitor. “In case after case, we see evidence of political calculations determining the outcomes of cases.”

Schenkkan highlighted cases in which defendants won legal victories but saw decisions overturned or reversed, such as in the trials of journalist Ahmet Altan, philanthropist Osman Kavala and former co-chair of the Peoples’ Democratic Party Selahattin Demirtas.

“It is impossible to imagine that the coup trials — cases in which President Erdogan himself is a [plaintiff] — will be decided independently based solely on the evidence,” Schenkkan told Al-Monitor.

The coup trials remain a highly sensitive topic in Turkey, where thousands of citizens intervened to stop a putsch that saw fighter jets bomb the nation’s parliament building. Yet some families of convicted soldiers have spoken out against what they believe are disproportionate jail sentences served to hundreds of low-level military personnel.

Alper Kalin, a 28-year-old air force pilot in training, was sentenced to life in prison in November for being present at Akinci base the night of the coup. The base served as a headquarters for coup plotters, and in his defense Kalin denied prior knowledge or participation in the violence that took place on July 15, 2016, saying he strictly followed orders from superiors to remain at the base.

Kalin was charged with membership of a terrorist organization and attempting to overthrow the constitutional order. His father, retired Sgt. Ali Kalin, said the conviction was unjust and that his son and dozens of other trainees at Akinci base that night had been unfairly portrayed as active participants in the coup attempt.

“Media coverage of the coup trials focus on the generals and commanders, but they overlook the hundreds of cadets that were given the same sentences,” Kalin told Al-Monitor.