Former members and supporters of Turkey’s ruling Justice and Development Party discuss the four-year anniversary of the 2016 failed coup and say that the rule of law and democratic principles have been weakened in the country. 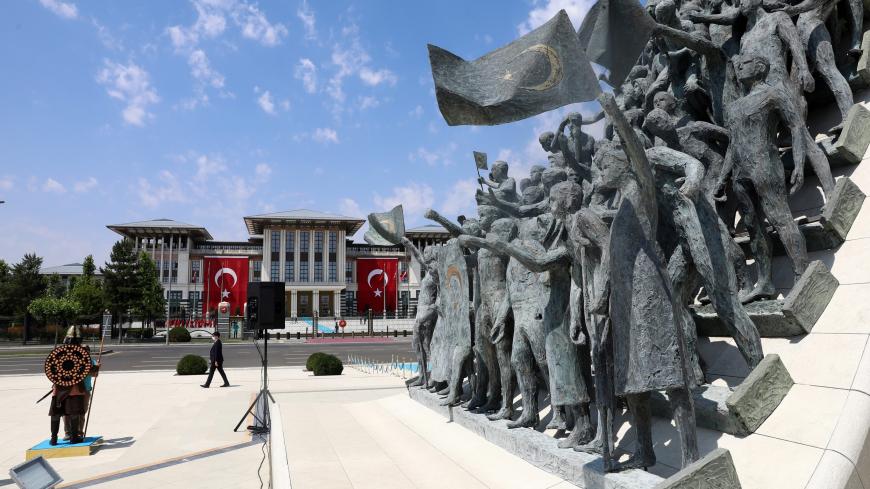 The July 15 Monument is seen in Ankara, Turkey, during the July 15 Democracy and National Unity Day's events held on July 15, 2020, to mark the fourth anniversary of the failed coup. - Photo by ADEM ALTAN/AFP via Getty Images

ISTANBUL — Nihal Olcok’s husband and 16-year-old son were among the 251 people who lost their lives during a violent coup attempt the night of July 15, 2016. They had joined countless citizens in the streets to defend Turkish democracy against a military takeover in an event that continues to shape the country to this day.

Her husband, Erol, worked closely with Turkish President Recep Tayyip Erdogan. Olcok, however, reflecting on the fourth anniversary of the failed putsch, said she believes the government has misrepresented the legacy of those who died that night, using the event to limit the democratic rights they fought for while infringing on rule-of-law principles in the post-coup purges that followed.

“I did not just lose my husband and son that night,” Olcok told Al-Monitor. “Turkey, as a nation, lost its sense of hope and trust on July 15.”

The government accuses supporters of Fethullah Gulen, an Islamic cleric living in self-imposed exile in the United States, of organizing the failed coup. Since then, 282,790 people have been detained and 94,975 arrested on coup-linked charges, according to a statement issued this week by Interior Minister Suleyman Soylu. During the same period, about 150,000 people were dismissed or suspended from their positions as academics, judges, prosecutors, police officers and public servants. Detentions of suspected coup-plotters are still taking place.

Dissatisfied with this state of affairs, Olcok became a founding member of the Future Party established in December by former Prime Minister Ahmet Davutoglu. She joined it along with many figures from the former Justice and Development Party (AKP) who say Turkey’s ruling party lost its reformist roots following the coup attempt.

Some critics have accused some Future Party members of having partaken in AKP efforts to consolidate its governing powers. However, several leading figures in the breakaway party interviewed by Al-Monitor said their aim is to reverse the nation’s slide into authoritarian rule in recent years and to repeal an executive presidential system passed in a controversial 2017 referendum.

Like other opposition parties in Turkey, Future Party members straddle a fine line between addressing legitimate threats posed by Gulen supporters still operating in Turkish institutions and fostering an impartial legal system that issues fair rulings for government critics, journalists and civil society leaders, many of whom remain imprisoned amid lengthy court proceedings.

Olcok said that despite years of post-coup purges, key political figures with links to the Gulen movement have yet to be prosecuted in Turkey.

“This organization is like a lizard, you can keep cutting the tail and it will grow new tails so you have to cut the head,” Olcok told Al-Monitor. “By head, I mean the strong figures in this movement who are still in this country. The political branch of the movement still hasn’t been touched.”

To date, Turkish courts have concluded 275 of 289 trials linked to the 2016 coup attempt. According to the pro-government Daily Sabah, 2,532 defendants in these trials were sentenced to life in prison. The Justice Ministry has requested the extradition of 807 suspected Gulen supporters, including Gulen himself, from 105 countries. At least 116 such requests had been fulfilled at the time of reporting.

“They will run and we will chase them,” Turkish presidential communications director Fahrettin Altun told the Hurriyet newspaper July 14, referring to Gulen supporters. “We will make them pay for the people who lost their lives and were injured during the coup attempt.”

Nate Schenkkan, director for special research at Freedom House, said coup-linked detentions and attempted extraditions have slowed in pace but are likely to continue indefinitely.

“The state officially considers a quite large segment of society morally and legally responsible for the coup attempt,” Schenkkan told Al-Monitor. “It considers anyone associated with that segment — even tangentially through, for instance, a bank account, a newspaper subscription, an app or an educational history — to be part of a terrorist network.”

Ayhan Sefer Ustun, a former AKP deputy chairman and the Future Party's vice president, criticized many of the post-coup changes that have taken place in Turkey. Ustun said his main concern was the 2018 establishment of an executive presidency, which diminished the role of parliament and consolidated governing powers under Erdogan.

Ustun said he initially backed the presidential system, believing it would help prevent future coup attempts, but was unsettled when he saw drafts of the legislation. He raised objections to the proposals, but said his concerns were quickly dismissed.

“The main person that was drafting this law at the time, whom I will not name, told me, ‘Mr. Ayhan, you are right; however, we are sewing this outfit for Mr. Erdogan. Once he’s gone, you’ll be free to change the system however you like,’” Ustun told Al-Monitor.

Selim Temurci, deputy chair for the Future Party and a former AKP Istanbul provincial chair, echoed criticism of the presidential system, blaming a two-year downturn in Turkey’s economy on a highly centralized decision-making process that “disregards democracy and rule of law.”

In a recent appearance on Turkey’s Halk TV, Temurci also condemned post-coup narratives that depict AKP figures as defenders of democracy, claiming he could not reach party members by phone the evening of July 15, 2016.

“I acknowledge that fear is a human emotion, but many did not answer their phones and many did not take the streets like our supporters,” Temurci told Al-Monitor. “My main criticism is that they are being presented as heroes of July 15 and we see this as disrespectful of the 251 people who were killed.”

Looking back, Temurci said the politicization of the coup attempt had further polarized Turkish society.

“What has the government done in the last four years to ensure democracy and national unity?” Temurci asked. “The government has politicized July 15 and suspended democracy to keep their seats. We have seen this with the Istanbul municipal elections as well. Those who did not vote for [the AKP] were declared traitors and we see this as a contradiction of democratic norms.”

“We think the policies currently in action are taking Turkey to darker days,” Temurci said.

Courts and the law
Turkey elections