On the third anniversary of the July 15 coup attempt, politics, foreign policy and daily life continue to bare marks of the night that would remake Turkey. 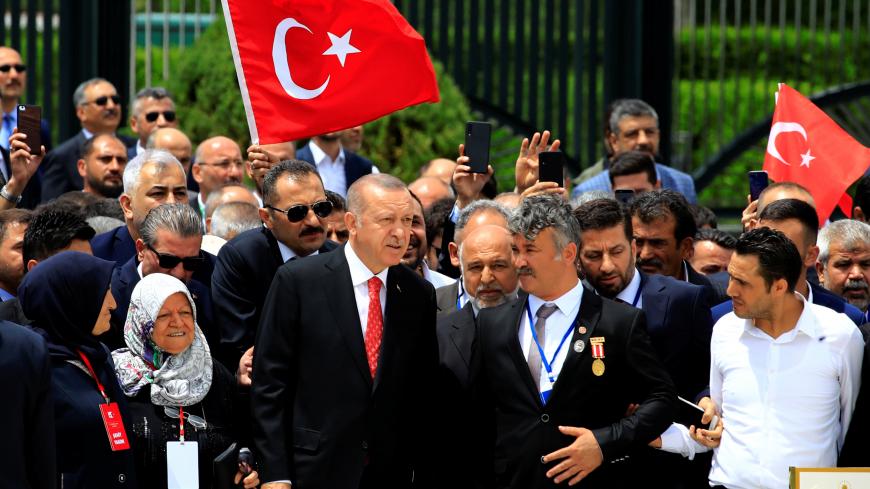 Turkish President Recep Tayyip Erdogan visits a monument as he is flanked by his supporters during a ceremony marking the third anniversary of the attempted coup, at the presidential palace in Ankara, Turkey, July 15, 2019. - REUTERS/Umit Bektas

For decades, Omer Faruk Gergerlioglu was both a doctor and a human rights advocate. By day, he saw patients at the Izmit Seka State Hospital. By night, he was a member of human rights organizations and shared posts on social media supporting a peace process to end nearly 40 years of warfare between Kurdish militants and the Turkish state.

On Oct. 13, 2016, one of his social media posts got him suspended and eventually dismissed from his position by decree law over alleged links with terrorist groups. He became one of 150,000 civil servants laid off in a wave of ongoing purges that began after the July 15, 2016, coup attempt in Turkey. Like the many dismissed academics, police officers and state employees, his passport was confiscated, he struggled to find employment and he became socially isolated in a period he describes as his “civil death.”

“People were treating me as if I had the plague,” Gergerlioglu told Al-Monitor. “They wouldn’t talk to me. My friends, neighbors, relatives, they all cut their links. It was a complete social exclusion.”

The purges began as a sweeping effort to rout out supporters of the US-based Islamist Fethullah Gulen, whom Turkish officials accuse of orchestrating the coup. But the purges quickly spread, targeting opposition leaders, lawyers, journalists and human rights advocates, stifling free speech over the last three years, in which 77,000 people have been jailed pending trial.

Unlike many of those caught in the post-coup fallout, Gergerlioglu ran for parliament and won a seat with the Peoples’ Democratic Party (HDP) in the province of Kocaeli. Since then, he has been working on cases stemming from the state of emergency, which was imposed from July 2016 to July 2018.

“I cry almost every day because it’s heartbreaking — it’s very heavy,” Gergerlioglu said. “The state breaks everyone’s back. It doesn’t matter if you are a Turk or Kurd, an Alevi or a Sunni, or an atheist, the state goes after everyone.”

Today, on the third anniversary of the failed coup, President Recep Tayyip Erdogan is commemorating the sacrifices of the more than 250 people who died trying to stop rogue military units from overthrowing the government. Seen as a triumph of democracy by some and the beginning of Turkey’s authoritarian slide by others, few nights have redefined daily life and politics in the nation like the July 15 coup attempt.

From the continued repression of street rallies to Turkey’s recent acquisition of Russian S-400 missile defense systems, the failed coup bares marks on nearly every domestic and foreign policy decision. Taken together, the arc of developments in post-coup Turkey has created distance between the nation and its long-time Western allies that may prove difficult to bridge in the coming years.

Such divides are most prevalent in growing US-Turkey tensions, which have been aggravated in recent years by a perceived lack of support from Washington following the coup attempt, as well as US collaboration with Kurdish militias in Syria, which Ankara deems a security threat. Such discord has weakened Erdogan’s trust in his American counterparts and has been cited as one of the main reasons behind his purchase of the S-400s, which could trigger sanctions on Turkey as early as this week.

“Just today, Erdogan said Turkey's biggest threats come from the West,” Nicholas Danforth, a senior visiting fellow at the German Marshall Fund, told Al-Monitor. “Washington hasn't come to terms with what that level of hostility and suspicion means for future US-Turkish relations. This isn't something that can be smoothed over with well-meaning engagement or forced back into the box through the threat of sanctions.”

Concerns regarding Turkey’s judicial independence have also created tensions between Ankara and European Union member states, with which Turkey’s once viable accession process has stalled. A major point of friction came with the passing of a referendum in April 2017, which consolidated governing powers under Erdogan’s presidency, giving him greater control of the judiciary despite heavy criticism from EU governing bodies.

Turkish officials have since indicated that a new “Judicial Reform Strategy” will be implemented, but Ozturk Turkdogan, co-chair of Turkey’s Human Rights Association, said the initiative would do little to resolve controversial legislation passed through 32 state of emergency decrees and the 2017 referendum.

“This judicial reform is not the equivalent of a constitutional change because it just brings some temporary measures to these issues,” Turkdogan told Al-Monitor. “It doesn’t guarantee a separation of powers. It just loosens up the pressure to allow us to breathe a little.”

Turkdogan also noted human rights infringements continue daily in Turkey, as many defendants are denied due process and are often subjected to lengthy periods in pretrial detention. In a recent report, his association highlighted the frequent use of torture and solitary confinement in some Turkish prisons, which he said are chronically overcrowded as post-coup purges continue.

According to the Arrested Lawyers Initiative, an average of 500-600 people are detained each week on suspected Gulen links, down from a weekly rate of 1,500-1,700 detentions in the months following the coup attempt. Though Turkey’s state of emergency ended in July 2018, human rights advocates have voiced concerns that many of the legal measures it granted authorities have since been formalized into law.

“There are very few signals to suggest the situation could get better in the near future, I’m afraid, after a long time in which the human rights situation had improved,” Andrew Gardner, a senior Turkey researcher for Amnesty International, told Al-Monitor. “The last three years have been a disaster for human rights in Turkey.”

Though some observers are encouraged by initial discussions of judicial reforms, as well as recent victories by opposition parties in the March and June municipal elections, Gergerlioglu said he also struggles to see improvements in Turkey’s human rights record three years after the coup attempt.

“There are about 800 babies in prison,” Gergerlioglu said, referring to the number of young children staying with their jailed parents, as permitted by Turkish law. “These children don’t understand why the doors close at night, why they don’t go out. There have been many suicides because of these conditions. People fall into depression.”

He concluded, “The worst part is AKP [Justice and Development Party] deputies don’t care. They have no remorse, no sympathy for these people because … they believe they will never be questioned, they will never have to account for their actions, so they are acting with complete impunity.”