Turkish presidential spokesman Ibrahim Kalin did not provide details on a reaction, but he said it will be "of different forms, kinds and degrees." 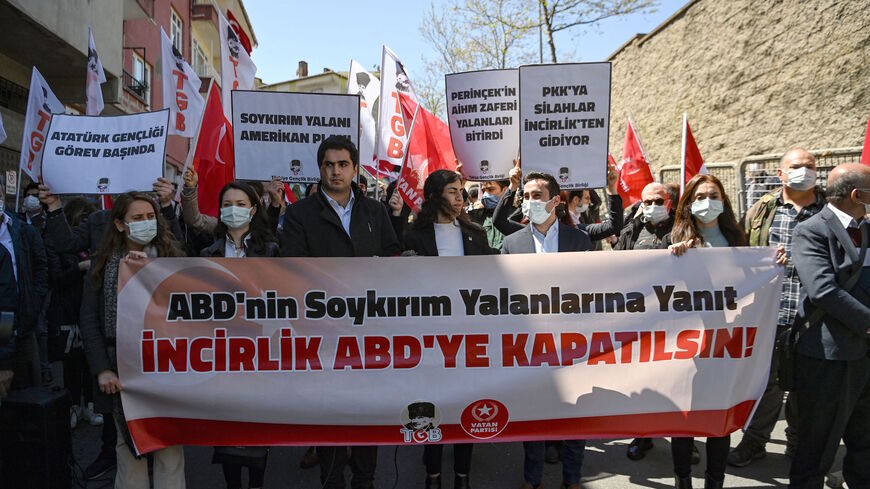 Protesters take part in a demonstration outside the US Consulate in Istanbul on April 26, 2021, as a banner reads "An answer of USA's lies, close the US base in Incirlik," following the decision of US President Joe Biden to recognize the Armenian genocide in 1915-1917. - OZAN KOSE/AFP via Getty Images

Turkey has vowed to respond to President Joe Biden’s use of the term genocide in a formal statement April 24 to mark the 106th anniversary of the mass killings of the Ottoman Armenians in 1915. It was the first time a US president referred to the Armenian tragedy in those words, a measure of the awful state of US-Turkish relations but also of Biden’s ethical foreign policy stance.

In an April 25 interview with the Reuters news agency, Turkish presidential spokesman Ibrahim Kalin called the characterization “simply outrageous” and said, “There will be reaction of different forms and kinds and degrees.” He did not specify what these would be and would only say, “At a time and place that we consider to be appropriate, we will continue to respond to this very unfortunate, unfair statement.”

So far Turkey’s only move was to summon US Ambassador David Satterfield in the late evening of April 24 for a formal protest. In fact, Ankara’s response has been remarkably muted given the decades of diplomatic and financial capital it spent on seeking to prevent just such a statement. Turkey’s swashbuckling president, Recep Tayyip Erdogan, has yet to comment.

Meanwhile, Erdogan's overtly anti-American interior minister, Suleyman Soylu, reserved his ire to a single tweet. “The United States does not know history. Because it has no history of its own. Therefore, the words that were put in its president’s mouth have no value whatsoever,” he said.

Devlet Bahceli, the leader of the far-right Nationalist Movement Party and Erdogan’s informal coalition ally, did make some hawkish noises but has not recommended any sanctions against the United States.

This is in sharp contrast with the main opposition parties, which blasted Biden for labeling the bloodletting organized by the Young Turks who ruled Turkey in the last days of the Ottoman Empire as a genocide, as most credible historians do. The pro-Kurdish Peoples’ Democratic Party was the sole outlier, calling in a statement for Turkey to “face up” to the Armenian genocide.

So what can Turkey actually do? The prevailing consensus is that it has limited leverage due to the parlous state of its economy, aggravated by a fierce third wave of the COVID-19 pandemic that has battered Turkey’s multibillion-dollar tourism sector. Turkey’s mounting diplomatic isolation is cited as another reason Ankara will have to live with Biden’s statement.

At least 30 countries have already recognized the genocide, including Russia, Germany and the Netherlands, “and in those instances too, Turkey’s response did not go beyond angry statements,” recalled Berk Esen, an assistant professor of international relations at Istanbul’s Sabanci University. In this instance too, the government “is likely to engage in bellicose rhetoric principally aimed at pacifying public fury. At the same time, it will seek to bait the opposition into a debate then accuse it of not responding forcefully enough to Biden’s statement, but such tactics are likely to backfire,” Esen predicted. “The government is continually losing support,” he added.

Sinem Adar, a research fellow at the German Institute for International and Security Affairs, concurred. “Just as the government’s room for maneuver has shrunk domestically, with the election of Joe Biden, it shrunk on the foreign policy front too. Biden’s April 24 speech needs to be assessed within this light,” Adar noted.

That is not to say that Turkey doesn’t have some leverage. It could, in theory, be less cooperative on Afghanistan peace talks that are meant to ease a full US withdrawal from the war-ravaged Central Asian state. Ankara agreed to host the talks in April — they have now been delayed — using its close alliance with Pakistan, which has considerable leverage on the Taliban, observed Ozgur Unluhisarcikli, Turkey director for the German Marshall Fund of the United States. Or it could limit US activity at Incirlik air base, he speculated. Last but not least, Turkey might, with Russia’s blessings, mount yet another attack against the United States' Syrian Kurdish partners in northeast Syria. But Unluhisarcikli does not believe that Ankara would resort to any of these measures, least of all before Erdogan and Biden are due to meet for the first time since the latter became president, on the sidelines of a NATO summit in June. “Any of these actions would incur a considerable cost for Turkey as well,” he said.

Some warn, however, that the Biden administration’s message that Turkey’s geostrategic value no longer trumps all else may push Ankara further into the arms of Russia and even China. Adar disagrees. “The ruling elite views Turkey’s NATO membership as a valuable lever and will refrain from adding new strains to existing ones.” Adar was alluding to the ongoing standoff between Washington and Ankara over Turkey’s acquisition of Russian-made S-400 missiles.

As such, further rapprochement with Moscow would be “an unintended consequence” of its hard power-driven foreign policy, she added.

Either way, said Merve Tahiroglu, Turkey program coordinator at the Project on Middle East Democracy, a Washington-based think tank, "Biden’s statement ought to be a wake-up call for Ankara about the consequences of playing the United States off of each other and the damage that has done to Turkey’s relationship with the United States.”