In his final visit to Turkey as US secretary of state, Mike Pompeo met with the Orthodox Christian spiritual leader in Istanbul Tuesday, forgoing meetings with state officials in a possible message to conservative American voters. 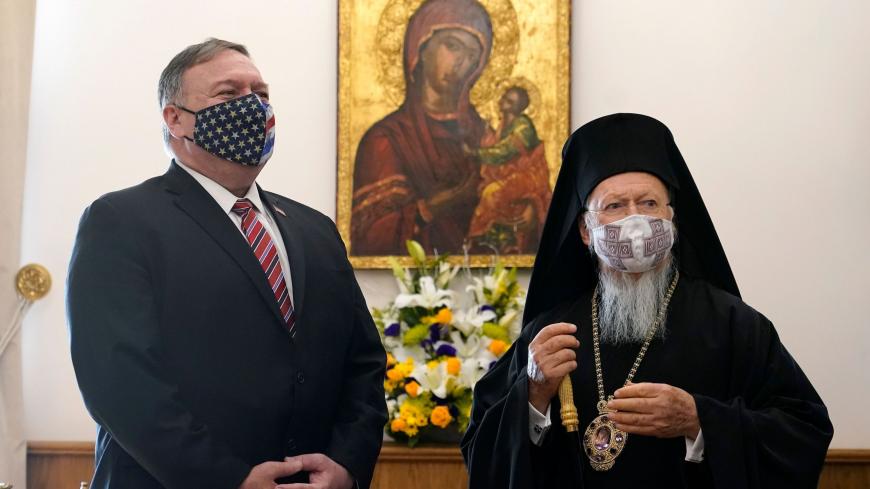 US Secretary of State Mike Pompeo (L) listens to Ecumenical Patriarch Bartholomew I, the spiritual leader of the world's Orthodox Christians, during a meeting at The Patriarchal Church of St. George in Istanbul on Nov. 17, 2020. - PATRICK SEMANSKY/AFP via Getty Images

ISTANBUL — During a brief stop on a seven-nation tour, US Secretary of State Mike Pompeo met with the spiritual leader of the world’s Orthodox Christians in Istanbul Tuesday, drawing criticism for not meeting with state officials before leaving the country.

Pompeo paid a visit to Ecumenical Patriarch Bartholomew I, the leader of roughly 300 million Orthodox Christians, who he said in a tweet Tuesday was “a key partner” in efforts “to champion religious freedom around the globe.”

Ahead of the visit, Turkey’s Foreign Ministry issued a statement in which it condemned Pompeo’s visit as “irrelevant,” stating Turkish citizens’ religious freedoms were protected by law and instead prompting the US official to “look in the mirror” at incidents of racism, Islamophobia and hate crimes in his own country.

Pompeo’s stopover comes amid high tensions between Washington and Ankara over looming US sanctions and Turkey’s actions in Libya, the eastern Mediterranean and more recently in the Caucasus. Speaking in Paris Monday, Pompeo said the US administration would need to work with European partners to address Turkish interventions in the region.

“France’s President Emmanuel Macron and I agree that Turkey’s recent actions have been very aggressive,” Pompeo said Monday, adding Europe and the United States must convince Turkish President Recep Tayyip Erdogan that “such actions are not in the interest of his people.”

The statements were likely ill received in Ankara, and though Pompeo’s meeting with Bartholomew I was not problematic in itself, that he forewent meetings with state officials during his Turkey visit sent mixed signals regarding the purpose of his tour.

Analysts following US-Turkey relations said Pompeo’s actions were most likely intended for US domestic audiences as he prepares for a political career beyond US President Donald Trump’s White House following the electoral victory of Joe Biden earlier this month.

“He’s pivoting from Secretary Pompeo to Senate candidate Pompeo, especially in the optics of his Turkey visit,” Soner Cagaptay, director of the Turkish Research Program at the Washington Institute for Near East Policy, told Al-Monitor, in reference to rumors the Pompeo is considering a senate run in Kansas.

US State Department officials said scheduling issues prevented Pompeo from meeting Turkish state officials during his visit Tuesday. In a press briefing Monday, one official said Pompeo’s tight travel itinerary did not allow him to visit his Turkish counterpart Mevlut Cavusoglu in Ankara, but that he “was open to seeing any Turkish officials” in Istanbul.

“It’s completely unacceptable in the Turkish political-cultural context that a foreign minister would travel from the capital to another city to meet his counterpart,” Cagaptay told Al-Monitor.

Ozgur Unluhisarcikli, Ankara director for the German Marshall Fund, echoed such sentiments, saying Pompeo could have made stops in both Istanbul and Ankara Tuesday but apparently opted against it.

“Coming from the Republican Party, Secretary Pompeo would like to appeal to faith-based constituencies. Therefore, making the point of visiting the patriarch while not visiting Ankara, I guess, would serve him well in domestic American politics,” Unluhisarcikli told Al-Monitor. “It’s purely American domestic politics.”

In recent years, foreign policy grievances between Washington and Ankara have expanded from divergent stances on the Syrian war to energy developments in the eastern Mediterranean and Turkey’s purchase of Russian-made S-400 missile defense systems, which could prompt the upcoming Biden administration to impose sanctions on Ankara.

Yet during his final Turkey visit as secretary of state, Pompeo appeared to focus solely on religious freedom in Turkey. Though he made no public statements Tuesday apart from tweets, in July Pompeo had criticized Turkish officials for reconverting Istanbul’s Hagia Sophia, a byzantine cathedral, back into a mosque.

“If the Trump administration’s goal with this trip was to send Turkey a message about Ankara’s aggressive foreign policy or its disrespect for religious freedom at home, then I think it’s a bit too late for either of those to resonate at this point, both because of Trump’s existing record with Erdogan and also his limited time left in the White House,” Tahiroglu told Al-Monitor.

Earlier this year the United States Commission on International Religious Freedom (USCIRF) criticized what it called “undue” interference by the Turkish government in the internal affairs of religious communities. In its annual report, the USCIRF highlighted numerous policy stances it found concerning, including new limitations on the “long-delayed” election of the Armenian Apostolic Church’s patriarch and the prevention of board member elections for non-Muslim foundations.

In addition, the USCIRF criticized state policies toward Turkey’s largest religious minority, the Alevis, whose places of worship lack official recognition and whose school-aged community members must take part in compulsory religion classes despite rulings by the European Court of Human Rights that found such policies violated Alevi rights.

Responding to the USCIRF report in June, Turkish Foreign Ministry spokesperson Hami Aksoy said the assessment was “written in a language far from objectivity” and that “Turkey continues to support its goals in protecting and developing the freedoms of religion and worship for all of our citizens via concrete steps.”

During his visit to Istanbul Tuesday, Pompeo held a closed-door meeting with Bartholomew I in the Fatih district of Istanbul. He was accompanied by a delegation including his wife Susan Pompeo and US Ambassador to Turkey David Satterfield. Pompeo also visited St. George’s Cathedral and the Rustem Pasha Mosque.

The visit coincided with a small demonstration organized the Turkish Youth Union, who protested Pompeo’s apparent snub to state officials near the Patriarchate. The participants chanted slogans such as “Down with US imperialism” and “Yankee go home.”

Pompeo’s next stop on the week-long tour is Georgia, followed by Israel, the United Arab Emirates, Qatar and Saudi Arabia.