The patriarch will also meet Ankara's US ambassador while in Washington. 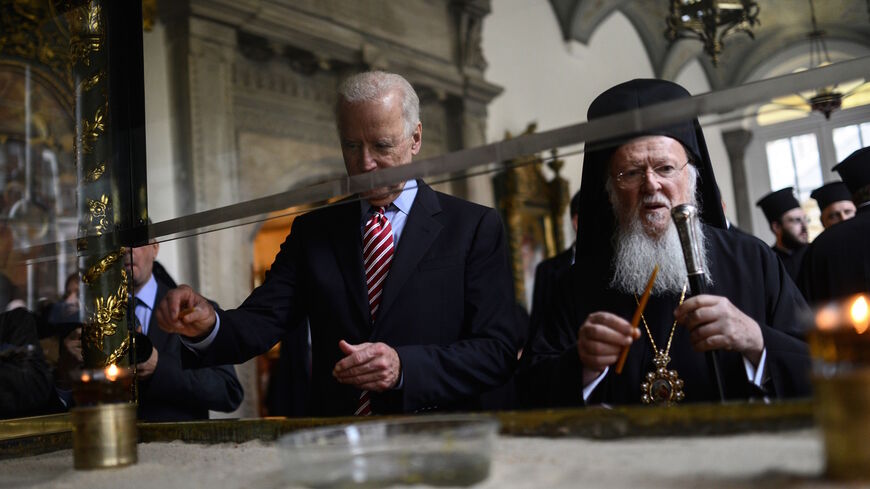 US Vice President Joe Biden (L) and Orthodox Patriarch Bartholomew I light candles during Biden's visit to the Church of St. George on Nov. 23, 2014, in Istanbul. - BULENT KILIC/AFP via Getty Images

Ecumenical Patriarch Bartholomew I, the Istanbul-based spiritual leader of roughly 300 million Orthodox Christians, is due to meet with President Joe Biden at the White House on Oct. 23 amid growing congressional scrutiny of religious freedom for minority groups in Turkey, Al-Monitor has learned.

Sources speaking on condition of strict anonymity told Al-Monitor that the patriarch, a Turkish citizen, would be having breakfast with Turkey’s new ambassador to Washington, Murat Mercan, during his visit to Washington. This suggests that Ankara — probably at Mercan’s urging — has opted to not have a hissy fit over the fact that the 81-year-old patriarch has been invited to the White House ahead of Turkish President Recep Tayyip Erdogan. Mercan will not be present at the audience, the sources said. The Greek Archdiocese of America did not respond to Al-Monitor’s request for comment.

Since taking office, Biden has made a deliberate show of keeping the Turkish leader at arm’s length. Although Turkey is a NATO ally, Biden called Erdogan for the first time on April 23 to give him advance warning that he would be using the term “genocide” in the White House’s annual message to mark the April 24 anniversary of the mass slaughter of the Ottoman Armenians in 1915. The pair did eventually meet on the sidelines of the NATO summit in Brussels in June, and the Biden administration has toned down its earlier critiques of Erdogan. Turkey’s apparent inability to get rid of Russian-made S-400 missiles, however, continues to poison ties.

Biden is known to have a soft spot for the patriarch, whom he visited at the patriarchal seat in Istanbul in 2011 when he was vice president. The men share a common concern for the environment. On Sept. 7, Bartholomew I penned a joint appeal with Pope Francis and Archbishop of Canterbury Justin Welby outlining the mounting perils posed by climate change.

The Ecumenical Patriarch will undoubtedly press Biden for his support over the continued ban on the Greek Orthodox community to train clergy at the Halki Seminary on Heybeli Ada, one of the nine Princes' Islands off the coast of Istanbul. The seminary was built under the Ottomans in 1844 and shuttered in 1971 by Turkish authorities who have long regarded non-Muslim minorities with deep suspicion.

Conspiracy theories abound over the patriarch’s supposed plans to establish a “second Vatican” in the heart of Istanbul. Nestled in a narrow street in Phanar near the Golden Horn, the Patriarchate has been the target of ultra-nationalist vigilante attacks. In 2013, Turkish police unveiled a plot to assassinate Bartholomew on May 29, the anniversary of the Ottoman Conquest of Istanbul.

In July 2020, Turkey’s dwindling population of ethnic Greeks — roughly 2,500 remain and most are elderly — suffered a deep emotional blow when Erdogan formally inaugurated their beloved Haghia Sophia, a UNESCO World Heritage Site, as a full-service mosque.

Bruce Clark, a writer on Greek affairs, is the author of “Twice a Stranger,” a wrenching account of the population exchange between Turkey and Greece in 1923. “The very survival of the Ecumenical Patriarchate in its ancient home, secured by a precarious diplomatic deal in 1923, owes much to America's declared concern for international religious freedom. So naturally enough, the patriarch has sought and won the attention of American administrations at the highest level,” Clark told Al-Monitor. He was referring to the Treaty of Lausanne signed between Turkey and the Allied powers, which delineated modern Turkey’s new borders and granted minority status to Armenian and Greek Christians and Jews.

Clark added, “While loyal to Turkish authority, the Patriarchate enjoys an impressive international network of contacts, facilitated by the Greek diaspora. Those contacts helped to main open channels with the White House. For the Greek-Americans, the welfare of the Patriarchate (and the restoration of its right to train clergy, suspended in 1971) is an abiding preoccupation. The visit will be a chance to raise those concerns.”

The dependency cuts both ways. With an eye, some say, on Greek American votes, former Secretary of State Mike Pompeo paid a visit to Bartholomew I in Istanbul last November without bothering to see his Turkish counterpart, Mevlut Cavusoglu.

Perhaps with the patriarch’s likely complaints in mind, the Turkish government may authorize restoration work for an orphanage that was wrested from the Ecumenical Patriarchate in 1964, amid rising tensions between Turkey and Greece.

The 122-year-old edifice — the second-largest timber structure in the world — is lying in ruins atop a hill on Buyuk Ada, the largest of Princes' Islands. The 206-room behemoth sheltered thousands of orphans. It was originally intended to house tourists arriving on the Orient Express.

In 2010, the Patriarchate won a tortuous legal battle in the European Court of Human Rights for its return. The patriarch reportedly plans to establish a global environmental research center at the site and will undoubtedly lobby for funds to restore the orphanage during his North American tour.