The spiritual leader of the world’s Orthodox faithful recognized a new national church of Ukraine, marking a historic split with Moscow amid a broader geopolitical dispute. 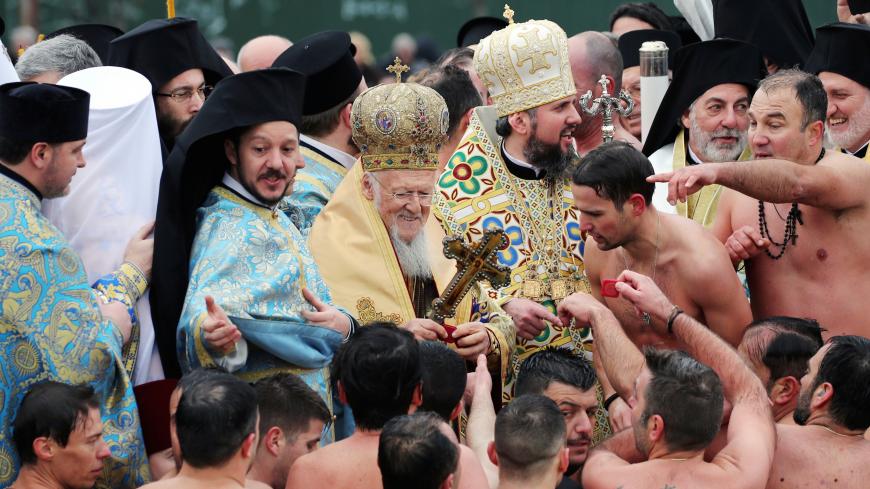 Ecumenical Patriarch Bartholomew I gives presents to Greek Orthodox faithful after they swam into the Golden Horn during the Epiphany day celebrations in Istanbul, Turkey Jan. 6, 2019. - REUTERS/Umit Bektas

ISTANBUL — The chime of church bells mixed with the Islamic call to prayer as the spiritual leader of the world’s Orthodox Christians granted the Ukrainian Church independence from Moscow, marking the biggest rupture in Christianity in centuries and risking the ire of both the Russian Church and government.

Ecumenical Patriarch Bartholomew gave the tomos of autocephaly, or decree of independence, to Metropolitan Epifaniy, the newly elected 39-year-old bishop of Ukraine. The move formally ends Moscow’s jurisdiction over the Ukrainian Church after more than 330 years and returns it to the fold of Constantinople, the former name for Istanbul, today a city of some 15 million Muslims.

“The winter is past for schisms and divisions. The rain is over and gone for ecclesiastical isolation. The flower of unity appears on the earth, and the time has come for the glorious Holy Metropolis of Kiev to acquire its ecclesiastical independence,” Bartholomew, 78, told Epifaniy in an elaborate ceremony attended by Ukrainian President Petro Poroshenko and his predecessor Viktor Yushchenko.

Their presence at St. George’s Cathedral on the banks of Istanbul’s Golden Horn underscores how intermeshed the religious rift is with a broader geopolitical dispute following Russia’s annexation of Ukraine’s Crimea peninsula in 2014. Russia also backs separatist militants in eastern Ukraine.

The Moscow patriarchate has already retaliated by severing communion with the Istanbul see, accusing it of creating a schism and describing breakaway Ukrainians as heretics. Russian President Vladimir Putin, who has adopted church ideology in domestic and foreign policy, has threatened to intervene, raising the spectre of violence as Ukrainian churches switch sides and take valuable property with them. One of Ukraine’s three Orthodox branches remains loyal to Moscow.

The church in Kiev first sought independence from Moscow a century ago, but intensified those efforts after the fall of the Soviet Union. Poroshenko, who is running for re-election in March, has made the cause part of his campaign.

For his part, Bartholomew had attempted to reconcile Moscow and Kiev over the years, but the Russians walked away, said John Chryssavgis, a theological adviser to the Ecumenical Patriarchate. Now, a primary consideration in agreeing to Kiev’s appeal was providing a spiritual home for the 20 million or so Ukrainians dispossessed by Moscow, he said in an interview.

“The patriarch’s motives are purely church, purely ecclesiastical. They do have political consequences, and he is very well aware of it. It’s almost as if it doesn’t matter what the political consequences are if they are right,” he said. “Moscow does threaten, it keeps saying, ‘Blood will be on your hands.’ That is a fear that many people have.”

With an estimated 150 million adherents, half of the world’s Orthodox population, the Russian Church has long begrudged the ecumenical patriarch his authority. Tradition ranks him “first among equals” of the heads of the now 15 autocephalous churches.

The seat of world orthodoxy is situated in a rundown neighborhood in Istanbul, a vestige of the Byzantine Empire after its fall to Ottoman Muslims in 1453. Bartholomew’s own flock has dwindled to less than 3,000 ethnic Greeks after years of economic pressure and official discrimination forced tens of thousands to emigrate since the 1960s.

Turkey has restricted the community’s ability to educate its clergy by keeping its seminary shut for nearly a half-century and does not recognize Bartholomew’s historical title as the ecumenical leader of his religion.

“The absence of criticism by the Turkish authorities of this decision, which reaches far beyond the Orthodox community of Turkey, suggests Ankara is happy for the patriarchate to take this broader role,” said Soner Cagaptay, the director of the Turkish research program at the Washington Institute for Near East Policy.

President Recep Tayyip Erdogan has not commented publicly on the affair, but he hosted Poroshenko at a historic Ottoman residence before mass at the patriarchate on Saturday in what may have been his tacit consent even as the Turkish leader navigates his own thorny relationship with Moscow.

Despite supporting opposite sides in the Syrian war, Erdogan and Putin have negotiated a handful of cease-fires in the conflict. The two countries are also key trading partners and Turkey is in the process of buying a Russian-made missile-defense system despite vehement objections from NATO.

But Erdogan has refused to recognize Russia’s occupation of Crimea, declaring his support for Ukraine’s territorial integrity. In November, he offered to mediate when Russia seized three Ukrainian ships and detained 24 sailors. Porosenko expressed gratitude to Erdogan for not intervening in the recognition of his new national church.

“Turkey almost never openly pushes buck against Russia. While Erdogan has made an effort to not leave any fingerprints … giving Ukraine a national church could not have happened without Erdogan’s blessing,” Cagaptay told Al-Monitor.

“The patriarch is independent and though there has sometimes been a contentious relationship between Ankara and the patriarchate … the welcome Poroshenko formally received as Erdogan’s guest suggests there was coordination behind closed doors,” he said.

Brandon Gallaher, an Orthodox theologian at the University of Exeter, agreed that Bartholomew likely had Turkish support in his decision but that he still took a significant “calculated risk.” At the heart of the clash between the patriarchates in Moscow and Istanbul are opposing views of modernity, he said in an interview.

“One of many clashes that the Moscow patriarchate is having with the Ecumenical Patriarchate is the clash of visions on how to approach the modern West,” he said. Moscow “sees its values as superior to the West, which it views as corrupt," while Constantinople "has been pushing for an engagement of Orthodoxy with the modern world that is without rancor.”

Chryssavgis said Ukraine’s turn to the West was a factor in recognizing the church’s independence.

“Every other ethnic church has their own independence, so why not Ukraine [with] its own traditions, culture, civilization, music and liturgy? It has many connections to Russia, but in the case of Ukraine today, it also has many connections with the West,” he said. “The patriarch has restored communion to millions of Ukrainians, an entire generation.”

Some of them were present in Istanbul, and a handful carried the national flag during two days of emotional services that culminated on the day that Ukrainian and Russian faithful alike observe as Christmas Eve.

Svetlana and her husband Jaroslaw, who was dressed in a traditional Ukrainian embroidered shirt, traveled from the city of Chernivtsi to witness the historic moment. “We have waited a long time for independence, almost 400 years. Today I feel joy,” she said.