US President Joe Biden is reportedly preparing to recognize the 1915 mass killings of Armenians as genocide Saturday in a move that could further strain troubled US-Turkey relations. 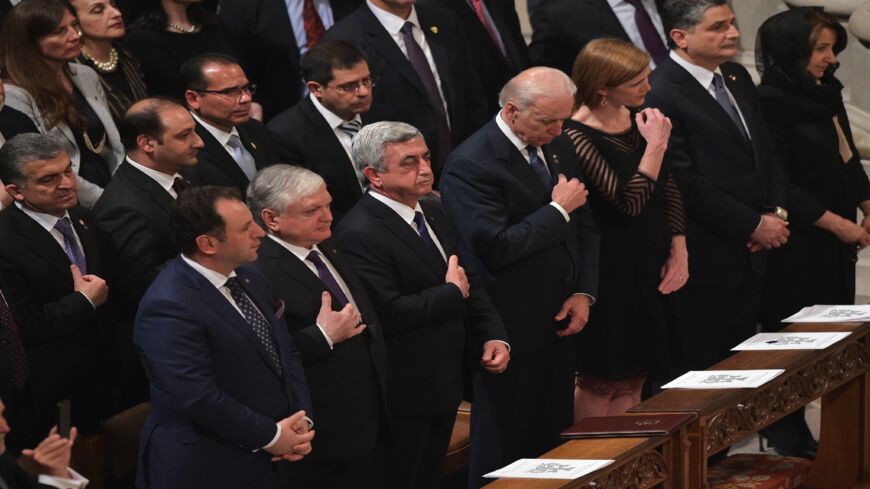 Armenia's President Serzh Sargsyan (3rd L) and US Vice President Joe Biden (C) cross themselves during a prayer service commemorating the 100th anniversary of the Armenian Genocide at the National Cathedral on May 7, 2015, in Washington, DC. - MANDEL NGAN/AFP via Getty Images

ISTANBUL — US President Joe Biden is reportedly preparing to formally recognize the 1915 mass killings of up to 1.5 million Armenians by the Ottoman Empire as genocide in a move that would further strain US-Turkey relations.

On April 24, Biden is expected to use the designation while marking Armenian Genocide Remembrance Day, becoming the first US president to do so since Ronald Reagan, who later retracted his statements following pressure from the Turkish government.

Ankara officials reject the term, maintaining far fewer Armenians lost their lives during what they claim was a broader World War I era conflict and that Ottoman officials did not commit systematic killings, in contrast to research by most historians who designate the events as genocide.

Nearly all US presidents have refrained from using the genocide term to maintain positive relations with NATO-allied Turkey, but despite a long list of grievances between Ankara and Washington, Biden may follow through on his campaign pledge for formal recognition, though some reports indicate he might make a last-minute reversal.

When asked about Biden’s recognition plans Wednesday, White House Press Secretary Jen Psaki said the president would “have more to say” about it on Saturday.

This comes after more than 100 members of Congress signed a bipartisan letter circulated by the Armenian Caucus Wednesday urging Biden to stand by his campaign promise. Previously, both the House and Senate approved measures in 2019 to recognize the genocide as a formal matter of US foreign policy.

Speaking Thursday, Turkish President Recep Tayyip Erdogan said, “Turkey will continue to defend the truth against so-called ‘Armenian genocide’ lies and against those who are supporting this slander with political calculations.”

Gonul Tol, director of the Center for Turkish Studies at the Middle East Institute, said previous US presidents, including Barack Obama, had made similar pledges regarding the Armenian genocide on the campaign trail, but withheld formal designation to avoid damaging US interests involving Turkey, which hosts a military base used by American forces to launch operations in Syria.

Tol said current dynamics have reduced the potential for serious harm in US interests, and that Biden may seek to signal his prioritization of human rights and democratic values, in contrast with his predecessor Donald Trump, who openly praised autocratic leaders.

“I think Biden is more likely to recognize it because there are several areas where American and Turkish interests overlap, such as in Afghanistan, the Black Sea, Iran,” Tol told Al-Monitor. “But it comes down to the question of what can Erdogan do in response?”

Tol continued, “I wouldn’t expect a dramatic response from Erdogan at a time when he’s seeking Western support, and that will certainly factor into Biden’s decision-making.”

Still, the prospect of recognition has already riled Turkish leaders and financial markets, with the lira sliding up to 2% early Thursday on worries of possible US-Turkey discord along with concerns over depleted central bank reserves.

Sinan Ulgen, chairman of the Istanbul-based Center for Economics and Foreign Policy Studies, said Thursday’s market volatility was an early warning sign regarding the prospects of escalation between Ankara and Washington ahead of Biden’s planned comments.

“Turkey will surely need to react,” Ulgen told Al-Monitor, which would spark political tensions that “could also irk market participants.”

Some analysts said Ankara could respond to the designation by restricting non-NATO missions out of Incirlik Air Base in Adana. Turkish officials could also once again take unilateral actions in Syria, disregarding US interests. Yet few expect reversals on Turkish policies in Ukraine and Afghanistan, where Ankara’s interests are served by the status quo.

Ozgur Unluhisarcikli, Ankara director for the German Marshall Fund, said Erdogan would be forced to show a strong reaction in the short-term, but long-term consequences could increase distrust of US policies in Turkish society, as some citizens might believe “Turkey is being singled out in yet another sign of double-standards.”

“This will initially raise nationalist sentiments in Turkey … creating a rally around the flag moment,” Unluhisarcikli told Al-Monitor. “Anger will be directed at the United States.”

Biden’s designation would come after falling short on promises to take direct action regarding the human rights record of Saudi Arabian Crown Prince Mohammed bin Salman, despite US intelligence reports suggesting he approved the murder of journalist Jamal Khashoggi.

Tol said the lapse in holding Mohammed accountable “sent the wrong signal,” but that the Armenian genocide designation might materialize due to added support from US Vice President Kamala Harris. Noting Biden may be a one-term president and that Harris is a former senator of California, which hosts a large Armenian diaspora community, Tol said Harris may seek to recognize the genocide to boost a possible future presidential run.

“She’s been playing a surprisingly big role in foreign policy and the decision-making process, so this could be part of her track record,” Tol told Al-Monitor.

The developments come as Turkey was officially excluded from an F-35 fighter jet agreement as a result of its expulsion from the program after its 2019 acquisition of Russian-made S-400 missile defense systems, according to a report by Anadolu Agency Wednesday.