Analysts expect the Joe Biden administration to take a harder stance than the Trump administration did on diverging US-Turkey policies, while noting Washington will also need to take pains to avoid alienating the key NATO ally. 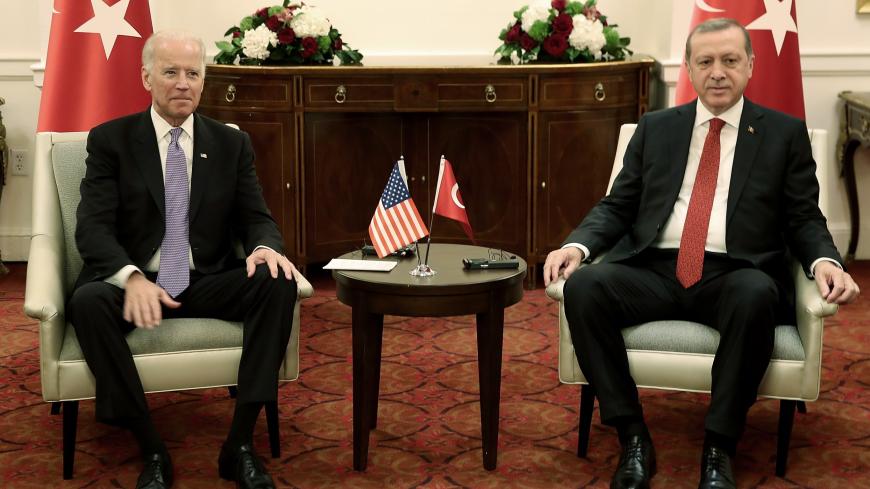 ISTANBUL — Following the inauguration of US President Joe Biden on Jan. 20, foreign policy experts expect a recalibration in US-Turkey relations, which have been marked by a long list of grievances in recent years.

As a result of diverging views on Syria, Ankara’s 2019 purchase of Russian-made S-400 missile defense systems and other policy differences, the distance between the traditional NATO allies has grown and the Biden administration faces a delicate balancing act in addressing points of discord without further alienating Ankara.

Where President Donald Trump in general had rapport with his Turkish counterpart Recep Tayyip Erdogan, analysts expect the Biden team to take a harder stance toward bilateral ties in the months to come. Incoming US Secretary of State Antony Blinken underlined this notion while speaking at his confirmation hearing in Washington on Jan. 19 when he questioned Turkey’s status as a strategic partner following the S-400 acquisition.

“The idea that a strategic — so-called strategic — partner of ours would actually be in line with one of our biggest strategic competitors in Russia is not acceptable,” Blinken said, adding his team would assess the impacts of US sanctions imposed last month in response to the purchase to “determine whether [there is] more that needs to be done.”

Yet while the S-400s will continue to serve as a point of concern for US officials — a number of whom have said the radar systems pose a security threat to NATO military equipment in the region — the issue will remain “unresolvable” in the near term, according to Soner Cagaptay, director of the Turkish Research Program at the Washington Institute.

“There’s no way Erdogan can walk away from that deal at this moment,” Cagaptay told Al-Monitor, saying that a change of course could rupture Erdogan’s ties with Russian President Vladimir Putin, who could then work to undermine Ankara’s interests in the South Caucasus, Libya and Syria, where Turkish forces remain active.

Cagaptay said that Erdogan instead will likely unleash a “charm offensive” as he has done previously and seek to bolster bilateral ties.

“Erdogan is a shapeshifter. He becomes what US presidents want to see in their Turkish counterpart,” Cagaptay told Al-Monitor. “For Biden — the internationalist, the reformer, the healer. [Erdogan] will become all of that.”

Still, many challenges lie on the road to amicable relations. The Trump administration condemned Ankara’s energy-prospecting activities in disputed parts of the eastern Mediterranean and fraught EU-Turkey ties will likely weigh on future Washington policy decisions. Democratic transgressions under Erdogan, which accelerated after a 2016 coup attempt, also prompted Biden call the Turkish leader an “autocrat” during a 2019 interview with The New York Times editorial board.

From Ankara’s perspective, the United States has failed to fulfill extradition requests for Fethullah Gulen, a US-based Turkish cleric Erdogan accuses of having orchestrated the failed coup. At the same time, US support for Kurdish militias in Syria has raised security concerns in Ankara, which sees the forces as an extension of the outlawed Kurdistan Workers Party.

Biden’s appointment of Brett McGurk to be US Middle East policy chief — he previously backed cooperation with Kurdish fighters to defeat the Islamic State in Syria — has only further raised concerns among Turkish lawmakers.

In addition, legal proceedings over the Turkish state-owned Halkbank’s role in circumventing US sanctions on Iran are set to resume March 1, and could lead to new sanctions that could reverberate throughout the Turkish economy.

In a recent report, Max Hoffman, director for national security and international policy at the Center for American Progress, outlined potential paths for the United States and Turkey to de-escalate their differences. He wrote that the United States should seek "to slow escalatory cycles that cannot be stopped, bureaucratize what have too often been emotional public disputes, and compartmentalize among the many discrete disagreements the countries face."

He also told Al-Monitor, “For the US, its interests are in a stable, democratic Turkey with which it can cooperate on a range of issues, and punitive measures that seriously harm Turkey’s economy don’t advance that goal.”

He added, “We also have plenty of evidence that Erdogan will spin punitive measures into a story of resistance, into a story of Western or imperialist interference” that could bolster negative sentiments toward the United States among Turkish citizens.

Following unfounded allegations of voter fraud in the US elections and a violent riot at the US Capitol on Jan. 6, Biden took office Jan. 20, proclaiming, “Democracy has prevailed.” Merve Tahiroglu, Turkey program coordinator at the Washington-based Project on Middle East Democracy, said democracies globally are facing unprecedented challenges that are interconnected, and she expected the incoming US administration to place renewed emphasis on democratic rights and institutions in the United States and abroad.

“While [Biden] will want to treat Turkey as a US partner and cooperate with it wherever possible, that cooperation will ultimately depend on, and be restricted by, Erdogan’s own respect for democracy and human rights in Turkey and its neighborhood,” Tahiroglu told Al-Monitor.