How Turkish President Recep Tayyip Erdogan hopes to improve ties with the United States and the European Union and get Turkey out of its economic morass without making any significant concessions remains unclear. 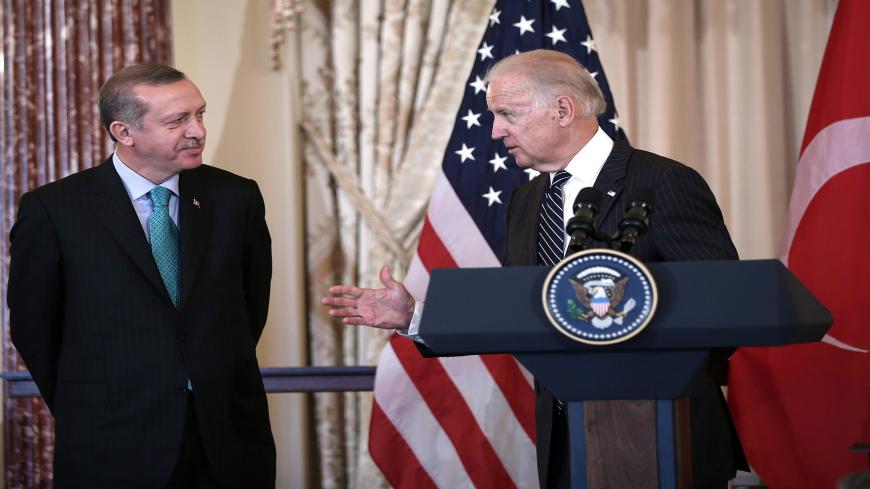 Turkish President Recep Tayyip Erdogan is seeking a new chapter with the new US administration in order to overcome Ankara’s deeply strained ties with Washington. He signaled this in the letter of congratulations he sent to newly elected President Joe Biden on Nov. 10.

"I believe that the strong cooperation and alliance between our countries will continue to contribute to world peace in the future as it has been until today," Erdogan said in his letter.

Erdogan, however, wants to improve these ties on his terms; he is not willing to compromise on issues that have damaged the “strong cooperation” he referred to.

Washington has also provided no indication that it is willing to compromise on these issues. The stalemate appears set to remain for the foreseeable future.

The most notable issue — although there are others that have clouded ties — remains Ankara’s purchase of Russian-made S-400 missile defense systems.

Turkey’s worsening record on democracy and human rights are also unlikely to garner much sympathy from Biden for Erdogan. Biden is on record saying he intends to prioritize these issues in international relations.

The two former close allies are also at odds over Turkey’s flexing of its military muscles in Libya, Syria and the eastern Mediterranean.

Due to congressional pressure on former President Donald Trump, Washington had sanctioned Turkey under its Countering America's Adversaries Through Sanctions Act (CATSAA) for its purchase of the Russian systems.

With Trump out of the picture, Erdogan has no one left in Washington to shield Turkey against the worst effects of these sanctions.

Washington also expelled Turkey from the F-35 program over its S-400 purchase. Ankara was hoping to meet its need for state-of-the-art fighter jets covering the next decade and beyond with the F-35s.

It is unlikely that calls by Ankara to rejoin the F-35 program will be heeded by the Biden administration, unless Turkey is prepared to shelve the S-400s and not use them.

Defense Minister Hulusi Akar said in December that was out of the question. “We have to concentrate on finding a solution to this problem in which we keep this system,” he noted.

Akar has also been calling on Washington to readmit Turkey into the F-35 program, decrying its expulsion from this program as unjust.

However, Biden’s choice for secretary of state has already clarified the new administration's position regarding the S-400 issue. “The idea that a strategic — so-called strategic — partner of ours would actually be in line with one of our biggest strategic competitors in Russia is not acceptable,” Antony Blinken said during his Senate confirmation hearings. “Turkey is an ally that in many ways … is not acting as an ally should, and this is a very, very significant challenge for us and we’re very clear-eyed about it."

Foreign policy expert Sedat Ergin said these remarks point to a hard line by Washington with regard to the S-400 file. “The Biden administration’s dialogue with Turkey is off to a troubled start,” Ergin wrote in Hurriyet.

Blinken also stressed that they would assess the impact of the existing CATSAA sanctions slapped on Turkey, “and then determine whether [there is] more that needs to be done.”

Ergin continued that “the other side of the medallion” is that Turkey will continue to question the value of America's strategic partnership, given continuing US support for the People's Protection Units (YPG) in Syria.

Ankara views the YPG as a Kurdish terrorist group that poses a threat to Turkey. It wants the United States to dump the YPG, but gives no indication of a new democratic opening to solve Turkey’s perennial Kurdish problem.

A “Kurdish opening” at home could also ease the path to a more sympathetic understanding by the United States of Turkish sensitivities regarding the YPG. Such an opening, however, appears impossible given Erdogan's political reliance at home on his alliance with the fiercely anti-Kurdish Nationalist Movement Party.

Meanwhile, Biden’s choice of Lloyd Austin for defense secretary and Brett McGurk as coordinator for the Middle East and North Africa also went down badly in Ankara. Austin and McGurk — who continues to be vilified by the pro-government media — are seen as the architects of the close ties the US military built with the YPG.

The dialogue of the deaf between Ankara and Washington over the YPG issue is set to continue for the foreseeable future.

Analysts underline that Erdogan’s position is weak with regard to Turkey’s differences with the United States. They say he has little leverage he can use to force Washington to comply with his demands regarding issues like the S-400s or the YPG.

Threatening to expel the United States from Incirlik Air Base in Turkey, also rings hollow, they add, because such a move would ultimately be counterproductive for Ankara.

Erdogan’s dilemma is that Turkey’s economy has been going downhill in line with its deteriorating ties with the United States and Europe.

It is not a newfound love for the West that is forcing him to try and reach out to the United States and the EU now. Erdogan has no other option but to look to the West again for much-needed foreign capital and investments.

In order to woo Europe, Erdogan has announced that his government is working on a “radical legislative reform package.” He also wants to restart the stalled Turkey-EU membership talks as a means to support Turkey’s failing economy.

The past few weeks have seen a flurry of diplomatic activity involving an exchange of letters between Erdogan and French President Emmanuel Macron, and visits by the Italian and German foreign ministers to Ankara and the Turkish foreign minister to Brussels.

Retired Ambassador Erdogan Iscan said the precondition for putting Turkey’s ties with Europe back on track is compliance with democratic standards based on the rule of law. “Just as it is not possible to keep the S-400s and return to the F-35 program at the same time, a desire to open a new page with the EU while refusing to implement the rulings of the European Court of Human Rights and to comply with democratic standards … will not bear results,” Iscan wrote in the T24 news portal.

Like Iscan many analysts argue that progress with the EU will be unattainable if Erdogan’s promised “reform package” does not target significant improvements in democracy and human rights.

Lacking such “gestures” any dialogue with the EU is bound to be conducted within a limited framework aimed at cooperating over pragmatic issues such as illegal immigration and terrorism.

Turkish-Greek tensions in the eastern Mediterranean and the Aegean will also be a key component of this “dialogue.”

Veteran political commentator Taha Akyol also believes that ties with the United States and Europe ultimately depend on significant reforms by Ankara. “The rule of law and democracy are not important in ties with any country in Asia and Africa. However, they are crucial in relations with the West,” Akyol wrote in his column for daily Karar.

Expecting Erdogan to make a major move aimed at upgrading the standard of democracy and human rights in Turkey, however, appears counterintuitive. His continuing use of the courts — which look to him for their rulings — against his critics and opponents shows the extent to which he is prepared to go in this regard.

Bold reforms by Erdogan would also be a hard sell to his Islamist-nationalist support base.

His supporters believe that any Western pressure on Ankara over its democracy and human rights is an attempt at bringing about regime change In Turkey.

Erdogan cannot afford to alienate his supporters at a time when new opposition parties are making political headway at home.

How Erdogan hopes to improve ties with the United States and the EU and get Turkey out of its economic morass without making any significant concessions remains unclear.

The Biden administration’s task in dealing with Turkey, on the other hand, will not be any easier.