Though observers expect few on-the-ground changes in the Libyan conflict after the Berlin conference, Turkish leaders have secured a seat at the negotiating table moving forward. 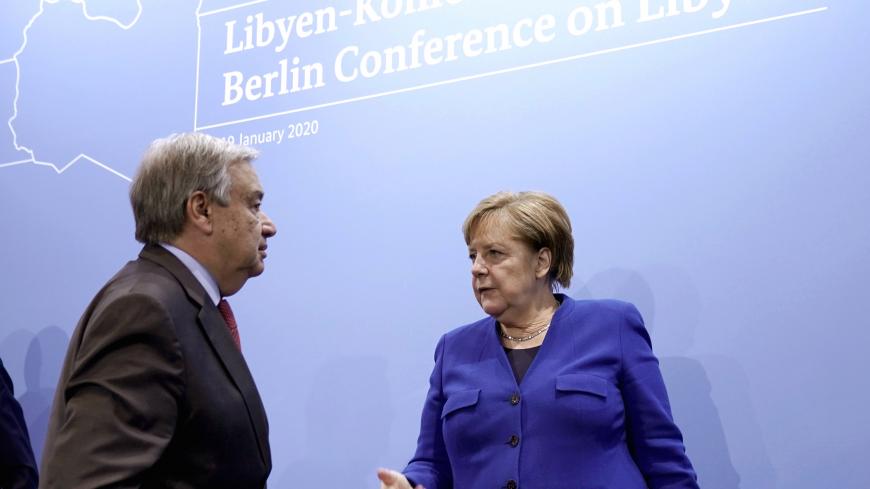 The Berlin conference on Libya ended Jan. 19 with domestic and foreign actors agreeing on fragile proposals to enforce an arms embargo and to work toward de-escalating a conflict that has gripped the nation since the fall of Col. Moammar Gadhafi in 2011.

Though many of the conclusions set forth mechanisms for progress, including the establishment of a cease-fire committee that is to meet regularly, few expect short-term changes on the ground in Libya as a sustainable resolution remains elusive. Still, in the days following the summit, observers have said Turkey’s increased involvement in the conflict acted as a catalyst for the European and international community to revisit developments in Libya.

Ankara, through agreements with the Tripoli government demarcating shared maritime boundaries in November and then with parliamentary approval of Turkish troop deployment to Libya earlier this month, has expanded its diplomatic clout in the nine-year conflict and has positioned itself as a key broker in developments moving forward.

In recent months, Turkish officials have increasingly supported the UN-recognized Government of National Accord headed by Prime Minister Fayez al-Sarraj in Tripoli against an offensive launched in April 2019 by eastern Libya commander Khalifa Hifter.

Sinem Adar, a research associate at the German Institute for International and Security Affairs in Berlin, said Ankara has multiple interests in its logistical and material backing of the Government of National Accord, including territorial and energy claims in the eastern Mediterranean, political alignments and economic incentives in the form of prewar Turkish debt.

Adar told Al-Monitor that the summit has helped Ankara buy further time to keep the Government of National Accord intact, adding, “One can perhaps argue that the summit for Ankara is a short-term gain, in this respect.”

Ozgur Unluhisarcikli, director of the German Marshall Fund in Ankara, agreed that Turkish intervention had proved successful in slowing down the offensive by Hifter forces, which had gained momentum in the fall with the help of Russian mercenaries working under the Wagner Group and air support from drones provided by the United Arab Emirates.

Unluhisarcikli said, however, that the push for a cease-fire at the Berlin summit would be difficult to implement as few mechanisms were agreed upon regarding who would monitor developments on the ground. He expressed similar apprehensions regarding enforcement of the arms embargo.

“Will this really prevent everyone from shipping arms?” Unluhisarcikli asked during a phone interview with Al-Monitor. “In Turkey’s case, it might be slightly easier to monitor because Turkey will need to use a sea route, but on the other hand, Hifter could continue receiving support from the gulf region via a land route [through Egypt], which is more difficult to trace.”

Turkish Foreign Minister Mevlut Cavusoglu told Turkish broadcaster NTV on Jan. 21 that Hifter must heed calls for a political solution. Prior to the Berlin summit, Hifter blocked oil exports from ports under his control, cutting Libyan oil exports by more than half.

“Does Hifter want a political or military solution? Until now, his stance has shown he wants a military one,” Cavusoglu said from the World Economic Forum in Davos. “Hifter must immediately fall back to the political solution line and take concrete and positive steps in line with calls of the international community for calm on the ground.”

On Jan. 20, Turkish President Recep Tayyip Erdogan said Ankara had not yet deployed Turkish troops to Libya, only military advisers and trainers. And while media reports have said Ankara is transferring Syrian fighters to Libya, multiple Turkish officials have denied this.

Asli Aydintasbas, a senior fellow at the European Council on Foreign Relations, said Ankara has strongly voiced its support for the Tripoli government and, following the bilateral agreements in November, was only more likely to defend Sarraj against future offensives.

“If news is to be believed, some of the foreign backers of Hifter have continued to send weapons over the weekend, which leads me to believe that no one has the intention to back down from the military aspect of the struggle,” Aydintasbas told Al-Monitor.

She added, “In other words we may be headed for another round of fighting. I hope I’m wrong.”

Aydintasbas also pointed to continued Turkish-Russian cooperation regarding the conflict following the collapse of peace talks in Moscow last week. Though Ankara and Moscow back opposing sides in both the Libyan and Syrian conflicts, she said officials have been able to “compartmentalize” disagreements and maintain a rapprochement in relations, most evident in Turkey’s S-400 missile acquisition and cooperation on energy projects.

“That’s really unprecedented and it tells us a lot about the new world we are entering, whereby two resurgent powers feel the West is dropping the ball, even on conflicts that are on its doorstep,” Aydintasbas told Al-Monitor.

Though cease-fire infringements continue to be reported by both sides in Libya, Unluhisarcikli said multiple rounds of diplomatic talks have increased Ankara’s regional influence, which officials will have to employ with tact.

“If Turkey chooses to use its leverage to improve cooperation, particularly with Germany but also with other European countries, I think Turkey would benefit from this,” Unluhisarcikli told Al-Monitor. “But if Turkey sees this as a victory, as a sign that Turkey is a very important power and etcetera, and sees this as a basis for acting unilaterally, I think Turkey would waste this opportunity.”