President Recep Tayyip Erdogan did not get what he wanted at the Libya peace conference in Berlin, but how much of a setback was that for Turkey? 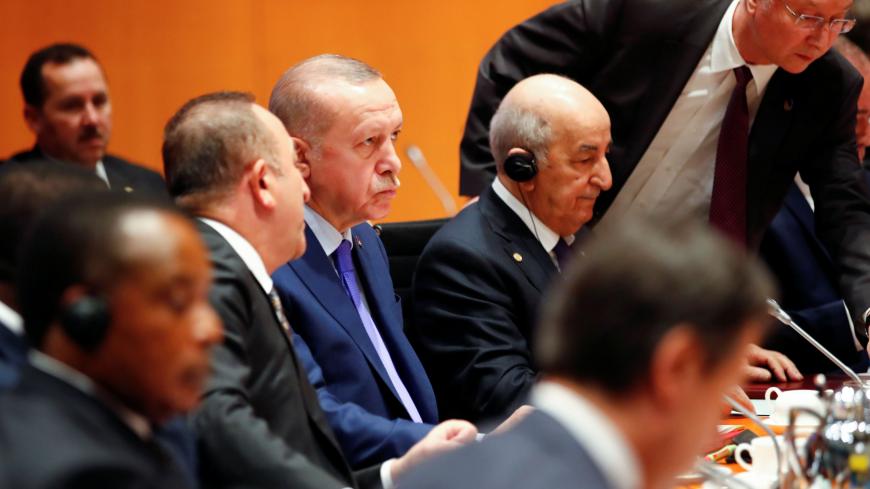 BERLIN — My best source for what happened at the July 19 Berlin conference on Libya was the influential Moscow-based newspaper Moskovsky Komsomolets, and if its news analysis is accurate, the biggest loser of the gathering was Erdogan.

A few hours after the Berlin summit ended with a long, final document, a Moskovsky Komsomolets headline said “Erdogan freaked out leaving the conference on Libya in Berlin.” The paper wrote that Russian President “Vladimir Putin can breathe freely: The participants in the Berlin conference on Libya did not support Erdogan’s proposal for military intervention in the Libya conflict, to be carried by the Turkish army." The newspaper said attempts to bring together the Government of National Accord led by Fayez al-Sarraj and the Libyan opposition led by strongman Khalifa Hifter will continue. The publication continued, "And any military assistance and outside interference is strictly prohibited. As a result, Erdogan freaked out and left the conference ahead of schedule.”

This reporting showed Erdogan and Putin on opposite sides when it came to Libya, with Germany and Turkey with Sarraj’s Government of National Accord and Putin, France, Egypt and the United Arab Emirates with Hifter. Hifter seems to have the upper hand on the Libyan battlefield and, perhaps more than important than anything else, its oil fields. Greece, which was not invited to Berlin, can be added to this axis.

How credible is Moskovsky Komsomolets? Almost 10% of Russians and one-third of Muscovites follow the newspaper, which has a reputation for occasionally sensational and provocative news items. A month ago, on the 100th anniversary of the newspaper, Putin said the publication "is rightfully considered a leader among print media in Russia.”

The newspaper wrote, “As it turned out, the Turkish leader left the conference ahead of schedule, when it became clear that his proposals for armed intervention in the Libyan conflict did not find support from other participants." The publication said that at the airport, "The president of Turkey looked nervous and gloomy."

The paper added, "Recall that on the eve of the conference, Erdogan published an article calling on Europe to authorize a military operation against the Libyan opposition, trusting the Turkish army." Erdogan had written in Politico, “Keeping in mind that Europe is less interested in providing military support to Libya, the obvious choice is to work with Turkey, which has already promised military assistance. … Europe can count on Turkey — an old friend and loyal ally — to achieve that goal.”

Erdogan described Hifter as “a warlord who seeks to carry out a coup d’état” in Libya who enjoys support from “the anti-democratic governments of Egypt, Saudi Arabia and the United Arab Emirates.” Ironically, Erdogan has categorized his own autocratic government as one of those liberal-democratic regimes of Europe.

“In Europe, the issue has divided the Continent, which has yet to make up its mind about what to do in Libya. Germany, which supports the country’s legitimate government and advocates diplomacy, will host a peace conference in Berlin on Sunday. By contrast, France has sided with the Libyan coup plotter, Hifter, against that country’s legitimate government,” Erdogan wrote without mentioning the Sarrac’s affiliation with the Muslim Brotherhood network, which is considered as “terrorist organization” by Egypt and Saudi Arabia.

But he didn’t hesitate to accuse some factions within the Hifter’s ranks of being radical Salafi jihadis threatening global security. “Terrorist organizations such as (IS) and Al Qaeda, which suffered a military defeat in Syria and Iraq, will find a fertile ground to get back on their feet. Indeed, some groups that largely share those terrorist organizations’ ideology, including the Madkhali-Salafis, are fighting alongside Hifter. If the conflict rages on, the violence and instability will also fuel irregular migration toward Europe,” Erdogan said.

French President Emmanuel Macron, for his part, is firmly against Turkey’s role in Libya. On the day of the Berlin conference, Agence France-Presse reported that Macron voiced his “acute concerns” over the reported involvement of Turkish-backed Syrian fighters in the Libyan civil war. “That must end,” Macron was quoted as saying. A day before the conference, images allegedly showing the transfer of Syrian fighters to Libya were circulated in international media.

Nonetheless, the remarks of German Chancellor Angela Merkel, the host of the summit, may give Erdogan a leg to stand on. Contrary to the tension he has with Macron, Erdogan displayed an unusually warm attitude toward Merkel.

She said, "We agreed on a comprehensive plan forward. I can say that all participants worked really constructively together." Merkel added that the leaders who attended the summit had agreed to continue to hold additional meetings to ensure the process continues so that "the people in Libya get their right to a peaceful life."

This means Erdogan will remain in the international political and diplomatic loop in the near future. The big question still remains now is how he will sustain his military support unflinchingly to Sarraj.

UN Secretary-General Antonio Guterres urged countries to “refrain from interference” in Libya, saying the summit's conclusion is right that "there is no military solution to the conflict in Libya."

European Commission President Ursula Von der Leyen and Vice President Josep Borrell said in a joint statement, "The participants have committed themselves to refrain from any measures and further military support to the parties that would endanger truce."

However, given the military upper hand Hifter seems to have in Libya, a truce may not be in his best interest.

Sarraj and Hifter, despite both being in Berlin, not only did not meet, but they were not in the conference hall while the fate of their country was discussed among world leaders.

“It is not possible to establish a serious sustainable dialogue between them, the differences in approaches are too great,” Russian Foreign Minister Sergey Lavrov said, noting that the opinion of the Libyan people on the Berlin declaration has yet to be “learned and taken into account.”

It remains to be seen what specific cease-fire, monitoring and enforcement mechanisms will be implemented by which foreign powers. Even after Berlin, it is still not known what concrete arrangements — if any — have been agreed upon.

As long as the uncertainty continues, there will still be some space for Erdogan to make new maneuvers on Libya. One thing that seems certain, though, is that he cannot register Berlin as one of his success stories.