By openly taking sides in Libya, Turkey could end up undermining the clout it believes it has gained in that country. 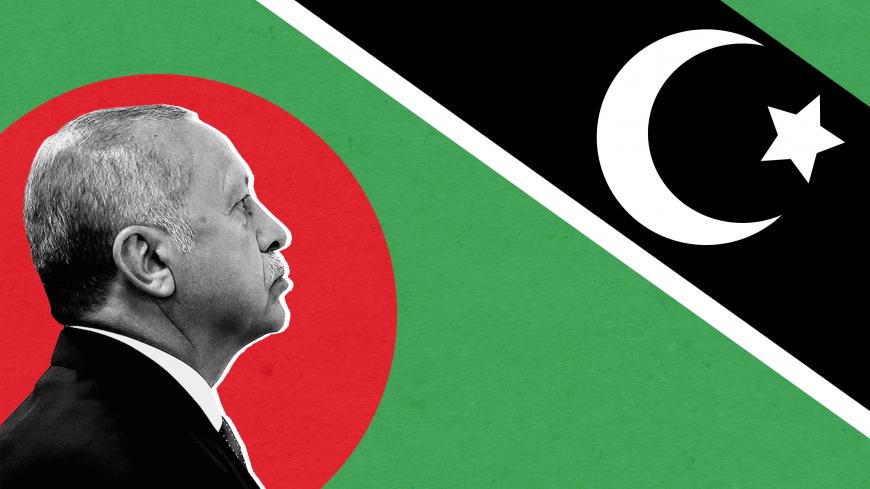 President Recep Tayyip Erdogan’s approach to Libya has the hallmark of his general approach to foreign policy. Some seasoned diplomats call this a “jump first, think later” approach.

As was the case in Syria, his current Libya policy carries the risk of producing fewer long-term gains than expected, whatever the short-term gains may be.

For now, though, Erdogan has put Turkey on center stage in Libya, which has resulted in accolades from his supporters and members of his government.

“Our president’s effective and multidimensional diplomacy has made Turkey one of the key actors [in Libya],” Erdogan’s spokesman and foreign policy adviser Ibrahim Kalin said in a Twitter message Jan 19.

Until recently, the Libyan crisis was simmering in the background while the world was more focused on Syria and Iran.

Erdogan’s decision to officially abandon neutrality in the Libyan conflict and provide military support to the UN-recognized Government of National Accord (GNA) in Tripoli undoubtedly helped turn international attention to this dispute.

Be that as it may, the Libyan crisis, with its many stakeholders — most of who are opposed to Turkey’s involvement in that country — is far from over.

To start with, it remains to be seen if the results of the Berlin Conference, stipulated in the long, final statement issued after the gathering, can be implemented.

The Berlin Process, as it is being referred to, calls for a cease-fire, for the UN-imposed arms embargo on that country to be honored and for those using proxies in this conflict in pursuing their interests to desist.

Although Erdogan signed on to it, the final statement does not quite tally with Turkey’s current military presence and objectives in Libya.

Erdogan can nevertheless take comfort in the fact that Turkey is not the only one taking sides in Libya, where opposition strongman Khalifa Hifter is supported by a host of countries — including influential ones like France and Russia.

The only difference is that, unlike Turkey, these countries are doing so mostly behind the scenes and are also reluctant to burn their bridges with the GNA in order to keep their options open.

Erdogan’s ultimate fear is that his latest regional bete noire, the Libyan warlord Hifter, will gain international legitimacy over time. He is working hard to prevent this by demonizing Hifter as a “putschist.”

Hifter’s Tobruk-based Libyan National Army (LNA) is trying to wrest control of the capital city of Tripoli from the GNA headed by Fayez al-Sarraj. Erdogan has vowed to prevent this by any means necessary.

Erdogan continues to detest Egypt’s Abdel Fattah al-Sisi, who toppled his close friend and fellow Islamist, the late Mohammed Morsi, in a coup in 2013, and refuses to deal with him.

Erdogan is aware, however, that Sisi was eventually accepted by the world as a legitimate interlocutor, regardless of the undemocratic way he grabbed power. He doesn’t want to see the same happening with Hifter.

Nevertheless, the Berlin conference, to which both Hifter and Sisi were invited, provided an unwelcome reminder as to how things can go wrong for Erdogan in the ever-shifting environment of international politics.

Erdogan reportedly left Berlin early because he did not want to attend Chancellor Angela Merkel’s official dinner to which Sisi was also invited. Still, he was forced to bite the bullet and participate in the “family photo” taken in Berlin, which also included Sisi.

Erdogan made his position on Hifter clear in an opinion piece for Politico on Jan. 18 in which he also lambasted some of the countries expected to take part in the Berlin talks the next day.

“Libya’s government, which the United Nations recognizes, has been under attack by the warlord Khalifa Hifter for several years. His armed group, which seeks to carry out a coup d’etat in the country, enjoys support from the anti-democratic governments of Egypt, Saudi Arabia and the United Arab Emirates (UAE), among others,” Erdogan wrote.

Erdogan also censured Europe for “betraying its own core values” by “leaving Libya at the mercy of a warlord.” He has repeated this argument against Europe in the past with regard to Sisi, albeit to no practical avail.

Casting aside any impartiality in Libya, Erdogan also promised unwavering support for the Sarraj government.

As was the case with Morsi, Erdogan feels an affinity for Sarraj, whose government is comprised of elements close to the Muslim Brotherhood.

This, however, is not the main reason why Erdogan wants to ensure that Sarraj remains in power.

Ankara and the GNA also signed a memorandum of understanding delineating their share of the eastern Mediterranean between the shores of the two countries facing each other.

This was designed to cut through the region jointly claimed for energy exploration by Greece, Cyprus and Egypt, who also have the support of the United States, the European Union and Israel.

Hifter has promised to trash this deal if he comes to power, and he even traveled to the Greek capital of Athens just before the Berlin Conference to poke Turkey in the eye. This is why Ankara has to ensure that he doesn’t achieve his goals in Libya.

As he was flying back from Berlin, Erdogan told reporters on his plane that he also rejected any notion of Turkey acting as mediator between Sarraj and Hifter.

Ratcheting up his vitriol against Hifter, Erdogan said he would never sit at the same table with a “terrorist.” Taking his remark a step further, he said he would also not allow others to do so.

However, as he was speaking, Erdogan had already been contradicted by the fact that Hifter was already a participant in the Berlin Process.

Many Turks believe that Erdogan’s approach to Hifter is as diplomatically flawed as his approach to Syria’s Bashar al-Assad was.

After refusing for a long time to have any high-level dealings with the Assad regime, Ankara was recently forced under Russian pressure to accept such a meeting in Moscow between its intelligence chief, Hakan Fidan, and his Syrian counterpart, Maj. Gen. Ali Mamlouk.

Galip Dalay from the Sharq Forum and a nonresident Fellow at the Brookings Doha Center pointed to the risk facing Ankara with regard to Hifter. “The actors supporting Hifter will want him to participate in the powers and mechanisms of the legitimate authority. This will accelerate the process that will enable him to transform himself from a militia leader to an actor who enjoys international legitimacy,” Dalay wrote in his column in Karar daily.

Dalay went on to argue that Hifter’s LNA is already being treated as a regular army, while there is discomfort over the presence of Syrian mercenaries in Libya who are supporting the GNA.

Press reports claim Turkey is organizing these mercenaries. Ankara denies these reports. According to Dalay, the Sarraj government might also be increasingly treated as Turkey’s proxy — the implication being that this could lose it international support.

Turkey’s difficulty is that it is not only facing regional powers such as Egypt, Saudi Arabia and the UAE in Libya, but also most of Europe, barring Italy. Russia’s indirect support for Hifter is also a source of displeasure for Ankara.

The majority of the stakeholders in Libya have expressed opposition to Turkey’s military activities in the country, even if it is clear now that this will be a token presence and only provide training.

With so many outside hands in Libya and clashing interests at play, a return to normality in the country anytime soon appears highly unlikely.

This will give Ankara time to work out new steps aimed at making its presence in Libya felt while keeping Erdogan in the headlines as a “key actor.”

The bottom line, however, is that Ankara will be the greatest loser should Hifter gain control of Libya whether by force or under another arrangement.

This is why many Turks worry that Erdogan’s policy of jumping first and thinking later while others tread cautiously will ultimately work to Ankara’s disadvantage in Libya, as it did in Syria.